Only in Florida.....Odds and Ends and Tidbits

Well...you remember that Sparky said things are kinda slow and there's not much to write about? That's still the case...but Sparky found some stuff she wanted to share....

And while we are talking weird and wacky, here's a link to Roadside America...the website for the country's weirdest travel attractions. Sparky earmarked the Florida page. We used to check this all the time wherever we traveled. That's how we found out about Solomon's Castle, home of a VERY creative inventor who built a castle in the middle of nowhere out of all recycled materials. It's VERY cool and it's not too far from Sarasota, on Solomon Road in Ona, Florida. Where the heck is that, you ask? You'll have to Mapquest it or Google it for directions. Sparky blogged about it two years ago, you can find it in her blog, too. 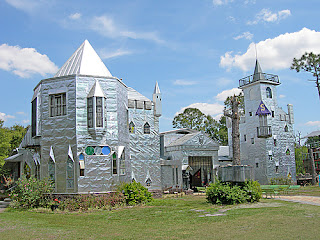 Well, how about that?! Sparky thought she had nothing to say today, and look what happened! A blog post! Stay tuned for more nonsensical musings, guaranteed!