Building Castles in the Sand....

The 2013 Amateur Sand Sculpting Contest on Siesta Key Beach was held this past weekend. Gee, wonder how they determined who's an amateur and who isn't?  This doesn't look like the work of an amateur! 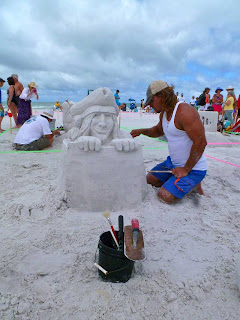 Sparky and Eldo love Siesta Key Beach, so we just HAD to go check this event out. Unfortunately, we couldn't find a parking space at the beach, so Eldo dropped off Sparky so she could get some pictures. 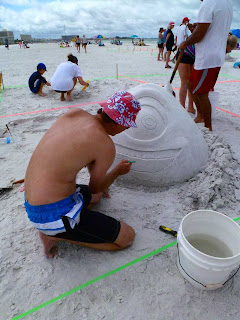 What a guy! This is the same guy that will stop on a dime to let Sparky take a photo of something that captures her imagination, like this mosaic over a Wells Fargo bank in Sarasota. 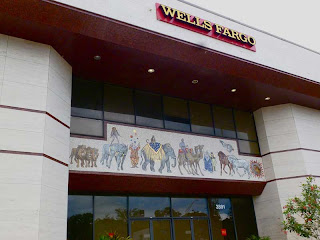 Eldy went out of his way on the way home from the beach just so Sparky could capture a little essence of Sarasota. (Hey, Sparky! Back to the beach, remember? She gets distracted SO-O-O easily, explains Eldo.) 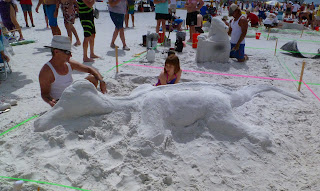 There were cash prizes for first, second and third place for several categories--adult humorous, adult miscellaneous, kids 10 and under, and kids 11-17 years old. 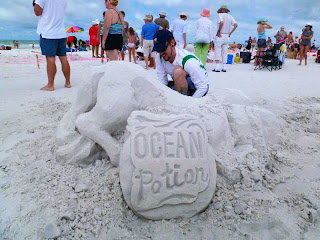 Some of these people might want to consider entering the Crystal Classic in November, when there is an $18,000 dollar prize! 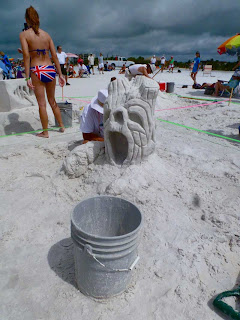 This guy was painstakingly blowing the sand out of crevices with a straw where he didn't want sand. 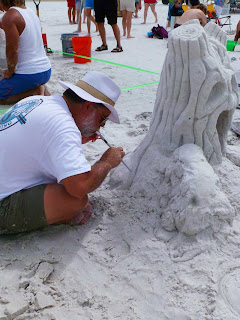 Gotta have some serious tools for sand sculpture...Trowels, paint brushes of different widths...A garden sprayer was also common for water and moisture control. 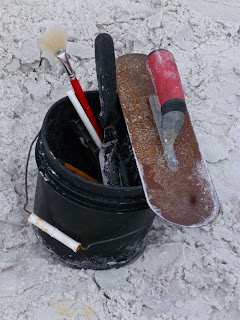 These guys were working hard on a traditional looking sand structure... 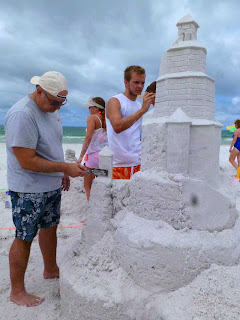 It's always interesting to see the theme people pick....This is a hand on prison bars.... 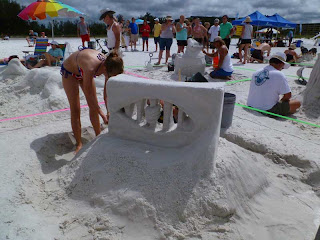 As always, Sparky was on the lookout for cute kids with cute hats at the beach... 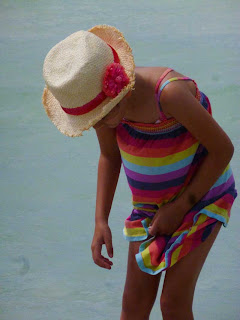 And cool beach scenes...Sparky loves the lifeguard stands in different colors at Siesta Key Beach...The next one down the road of stands is green. 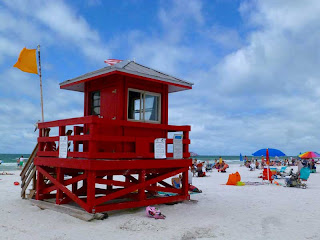 And the colorful umbrellas and sun screens... 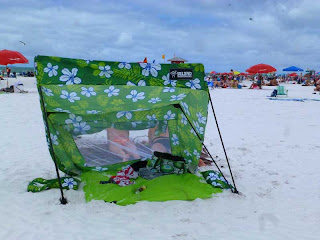 This sand sculpture reminded Sparky of all the times she went to the beach when she was a young girl. We lived six blocks from Lake Michigan, so we walked to the beach every single summer day. Sparky spent endless hours at the beach, sitting at the water's edge, making little drip castles, just like this woman making drip castles serving as spikes on the back of her dinosaur/lizard/snake. 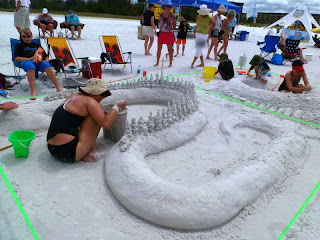 Sparky didn't hang around to see who won, Eldo was driving around in circles waiting for her to exit the beach. Sparky would be remiss if she didn't include at least ONE bikini photo for Eldo, who had to miss the sights at the beach today..... 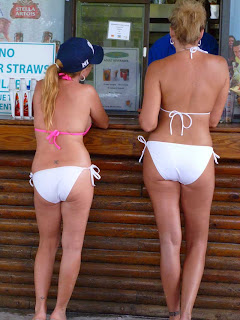 Speaking of sights at the beach, Sparky saw one gal, YOUNG, maybe in her twenties, who was barely covered--top OR bottom and whose body parts jiggled all over the place. She wasn't sure the gal's top was going to remain in place!....Geesh! Sparky must be getting old, as women's bathing suits or lack thereof are starting to bother her sensibilities. (Doesn't bother ME! laughs E.) He's disappointed Sparky didn't get a photo, but she thought that would be a little weird to take a picture of that particular gal's bathing suit.

Which reminds Sparky of something she saw recently on Facebook. It was Muhammad Ali's message to his daughter, when she came home in a revealing outfit that didn't leave much to the imagination.


Here is the story as told by one of his daughters:

“When we finally arrived, the chauffeur escorted my younger sister, Laila, and me up to my father’s suite. As usual, he was hiding behind the door waiting to scare us. We exchanged many hugs and kisses as we could possibly give in one day. My father took a good look at us. Then he sat me down on his lap and said something that I will never forget. He looked me straight in the eyes and said, “Hana, everything that God made valuable in the world is covered and hard to get to. 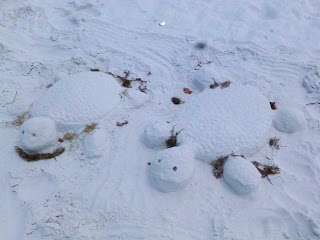 The world keeps changing faster than we boomers can keep up with, but modesty and humility are two things among many others, that are becoming in short supply in Sparky's opinion....She just wanted to preserve Ali's thoughts in her blog today.

It was a wonderful morning at Siesta Key Beach....
Until tomorrow...... 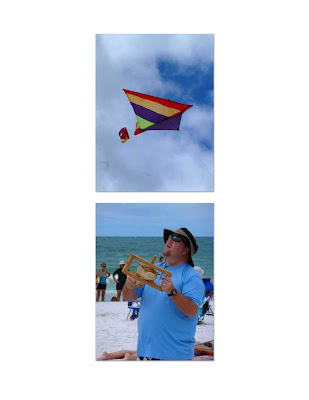