Where Have All the Shark Teeth Gone?

Sparky has had trouble ever since she got to Sarasota, finding shark teeth at Venice Beach or Caspersen Beach, and that's where all the shark teeth are supposed to be...Well, here's an inside tip---they aren't at the beaches, they've all been snapped up by collectors in preparation for Venice's annual Shark's Tooth Festival! 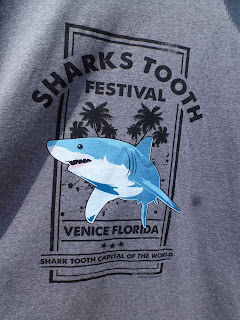 Just kidding, there are still plenty of teeth to be found at the beaches. You just have to have the right wave conditions to wash them into shore, or some little sifters to help you find them more easily, and/or lots of patience. And since Sparky expects to find one within five minutes of combing the rock ledges at Caspersen Beach, or a few minutes of looking at Venice Beach, she hasn't found one yet. But today....WOW! There they all were! All kinds and all different sizes...from little ones for 1.00 each.... 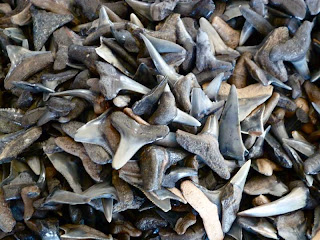 To BIG ones...the megalodon teeth, the prehistoric ones selling for big bucks, from fifty to several hundred dollars! 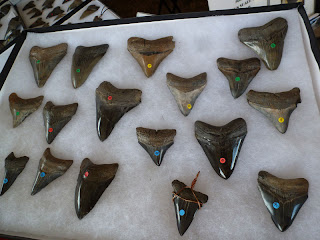 All festivals seem to start to look alike after awhile, especially the crafts...But here are some new ones we saw today...night lights made out of beer bottles...Sparky immediately thought, is this a good idea, promoting alcohol awareness in an application which is usually used with young children? (or it could be in a bathroom, adds E.) Not sure who the buyer would be on this one or even if it's a good idea? Maybe in a bar room as mood lighting? Or in a craft brewery with their own bottle brand of beer? Hm-m-m-m-m...He wasn't selling very many that we could see, so maybe others were kind of wondering about that. He also makes wine bottle wind chimes and wine bottle hurricane lamps, so that makes more sense. 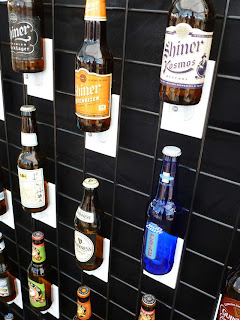 One of Sparky's favorites was the Coin Carver...This guy, Rich Bartholomew, out of Venice, FL was selling jewelry made from coins. He hand cuts out parts of these little coins and leaves fine coin details. He uses what looks like an ordinary coping saw but with special German blades. The coins were absolutely gorgeous and how he manages to cut out micro portions of the coins to leave the significant detailed parts left is AMAZING! He uses coins from all over the world to create his pieces. Sparky was so intrigued by them she forgot to get one. She wanted a dolphin one! 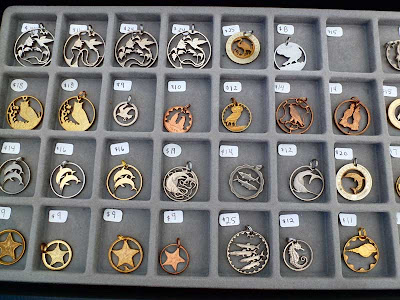 How about getting a crab or lobster stuffed for your Florida home? It was here...Ross Jones of R.J. Oceans will create unique pieces from your seafood catch if you didn't want to eat it. Anywhere from 20.00 to 2,000 dollars gets you a unique looking piece. Here's a 25 pound lobster caught off Cape Cod stuffed and ready for your Florida (or Maine) wall. 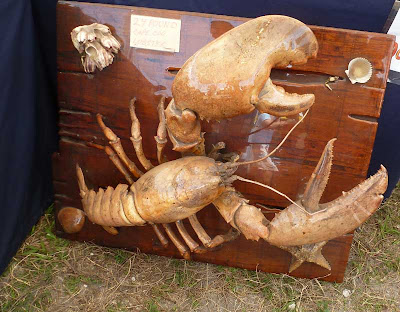 As always, Sparky was people watching...This little girl sitting right across from her had a messy piece of pizza, hm-m-m-mmmm....what to do? 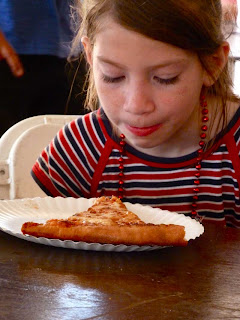 Dive in headfirst, no hands! 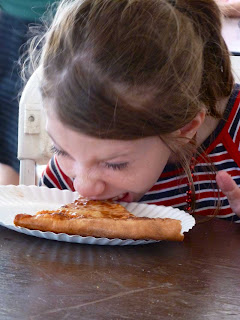 Lots of things to do for the kids. A rock wall clim, an "army ops" exploration inflatable setup. You know that bucking bull ride that adults do sometimes? They had a shark ride with a mini "kick" to it for the kids. 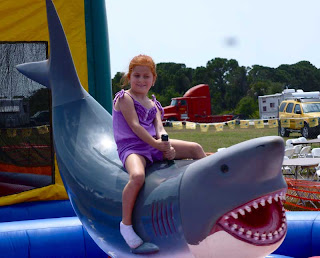 Then there was the chainsaw massacre, er, chainsaw sculptures vendor...and a sign that confused Sparky a bit. 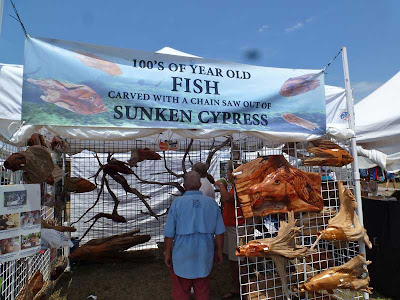 Year old fish? What significance does the age have to do with the chainsaw carving? Is Sparky missing something here? (Probably, smiles E.) 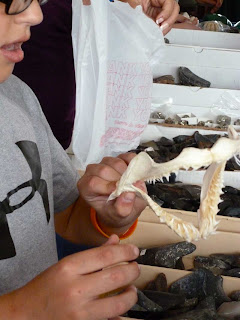 Lots of gemstones, dyed agates, sea glass, and fossil shells like these cool ammonite ones....Sparky would get some and put them under glass on a cocktail table or breakfast table. 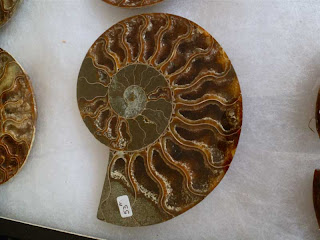 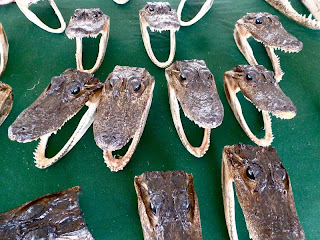 And of course, Landshark Lager was here..... 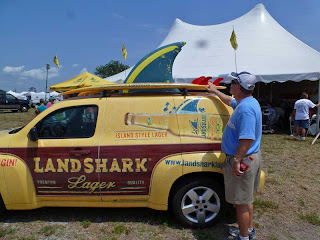 And lots of people were here.... 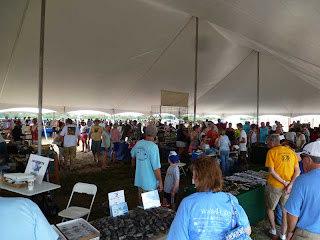 We enjoyed the festival, but not the location. It was right next to the airport, on dusty, dry fields. It was hot, and the dust and dirt was everywhere. Had it been at a nicer location, we would have enjoyed it more. Until tomorrow.....
Posted by Jeannie and Eldy at 11:50 PM