Flipper Says, Heads Up, Seven Up 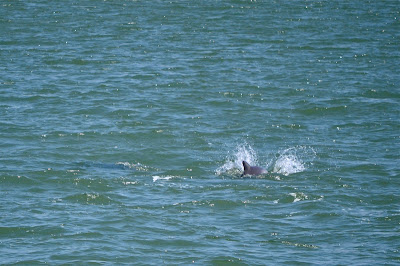 Remember Flipper, the TV series back in the early sixties? We think we saw some of his family today. :-) We went on a dolphin cruise today, "99% chance of seeing dolphins" they said. We did! But for us, it's never like the brochures where you see them frolicking in the wake of the boat, although we know that happens for certain for OTHER people! :-)  They were kinda far away today...swimming and playing in the channel, and only on the way out. 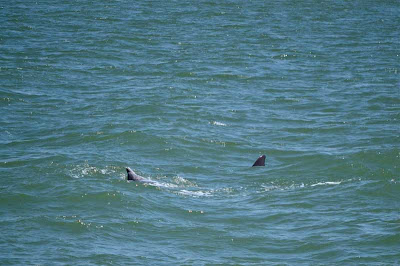 We found a Groupon coupon for the two hour dolphin cruise, regularly 70.00 for two people, and the coupon was for 50% off, making it a bargain at 35.00 for two, and a nice boat ride out in Boga Ciega Bay. The boat company was Dolphin Landing Charters. It is out of St. Pete's Beach and the landing is right behind the Dolphin Village Shopping Center on Gulf Boulevard in St. Pete's Beach. It was a beautiful day for a nice boat ride out and back. They serve complimentary pop, and beer and wine are available for purchase on board along with a few snacks. You are welcome to bring a cooler along with your own picnic lunch. One family had PIZZA from the shopping center where the charter boat company is located. Sparky thought that was a great idea, Eldy not so much so. :-)

Boca Ciega Bay is home to over 700 dolphins and they are usually out in the channel so back and forth we cruised today.....Hey, this one looks like Flipper! Heads up, everybody! 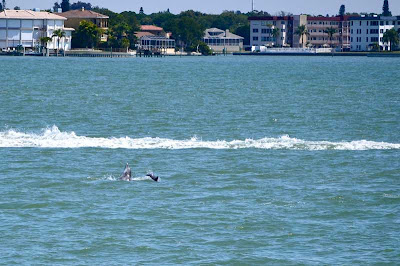 If for some reason you DON'T see dolphins, they will reschedule another trip with you...But we did. And they were certainly playing around, swimming backwards, a couple jumping out of the water, (Sparky missed that, of course, playing around with the camera and trying to figure out where they were going to pop out of the water next.) But she did catch SOME action.....Heads up, seven up! 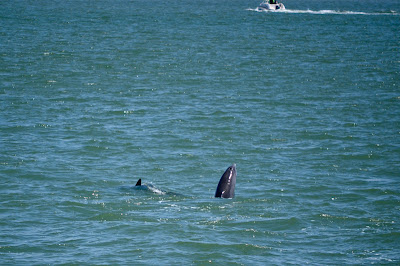 And a little more.....Swimming on their backs seemed to be a very popular activity today..... 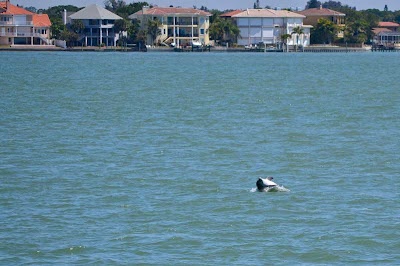 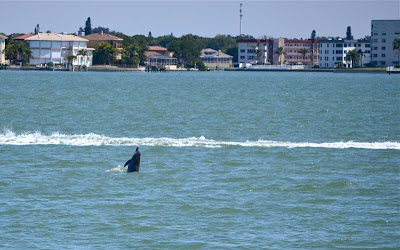 The boat was not extremely crowded and because it was quite cool out, in the sixties, we had room to wander around at the top of the deck to see what was out there. This little guy could have cared less about the dolphins, he was too tired to look! 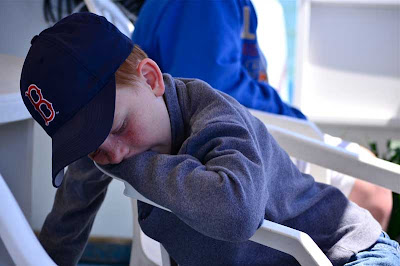 All that fresh air wears you out.... Back home we came, and settled in. The grandkids arrive tomorrow and will be here for a week! They are coming with another family so it probably will be little bit hectic around here....We'll see you later.....
Posted by Jeannie and Eldy at 11:36 PM