It would be fun to say Eldo got a little wild and crazy on his 65th birthday, but in actuality, it was a quiet one....We went out to breakfast this morning at the Broken Egg, 'cuz they give you a free breakfast on your birthday. In all the times we've been there, the well known ESPN announcer, Dick Vitale, has shown up AFTER we have left, or wasn't scheduled to be there, or was busy announcing during basketball seasons. Today, on Eldy's 65th birthday, we pull in the parking lot behind a Mercedes convertible. It was Dick Vitale! If you are a sports fanatic, you might have wanted to shake his hand or get an autograph, or purchase one of his books to support a search for a cure for pediatric cancer. He was pushing hard for us to make a starting bid at 100.00 for an autographed basketball, which looked pretty cool, but we had to politely decline this time....Sparky is so NOT into sports that she has no clue who the guys are on each side of Dick, and until she came to Sarasota, she had never heard of Dick Vitale. (Sorry, Dick!) Eldy got to shake his hand, so the day was off to a nice start.... 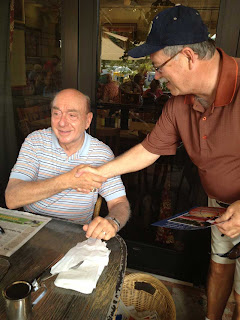 Off to Palmetto to see replicas of the Nina and the Pinta, the famous historical ships Columbus had on his expedition to sail to the Americas.  If you paid 8.00, you could go on board. Sparky and Eldy chose to look on from afar....The ships were side by side in the harbor. Hard to imagine over 100 men crammed on each one of these little ships coming across the Atlantic Ocean...Seeing these things up close and personal bring history so much closer to home and much more real-- a true testament to the courageous spirit of early explorers. 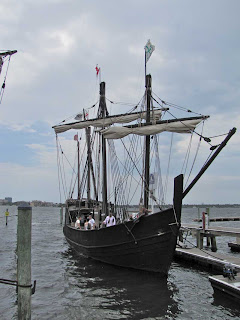 Checked out Coquina Beach on Anna Maria Island, a beautiful beach and very crowded today with families out on a  Sunday picnic and beach outing.....Off to dinner at Barnacle Bill's early diner dinner special--11.99 for steak, mashed potatoes and a beautiful mixed greens salad...Where's the cake, you ask? We didn't do dessert this evening...We were too full! Eldy was happy with his birthday dinner, he's not really a cake person....And finally, we headed over to Floribbean, in downtown Sarasota, another nice club where a 17 piece jazz band was playing, the Jazz Band Project--Shane Chalke, one of our favorite trumpet players told us about it, and he was there. It was great! 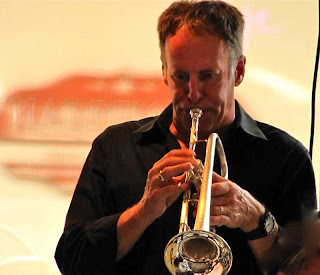 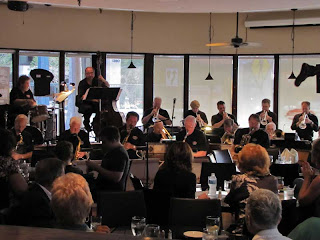 A wonderful way to end the birthday boy's day, and to top it off, when he got home, Steve Arvey, our favorite acoustic/blues guitarist, sent Eldy a YouTube video of him singing "Happy Birthday" from Ocean Blues!  It's been a great day!

Thanks for all the birthday wishes, Eldy says!
Posted by Jeannie and Eldy at 11:49 PM