With Eldy's grandson here, and three additional children under the age of 12, Sparky and Eldo took two kids out of five to Legoland Florida yesterday, Brooklyn and Trevor...Now, a cautionary tale first. There ARE hefty discounts available. Normal price for a child ages 3-12 is 71.00 a kid. There are discount coupons online for a child/adult ticket. Sparky purchased two tickets from Orlando Fun Tickets.  Sparky THOUGHT she purchased two JOINT tickets for Legoland. Her e-ticket says at the top: "Legoland Florida 1 Day, Ages 3-12/60 + E ticket." That would suggest a joint ticket, right? WRONG! We get to the park, and the ticket office says, nope! What you have there is a single entry ticket, you have to pay for the children. One hundred fifty-four dollars later, we were on our way into the park. Sparky was VERY upset! It turns out that Sparky did not read the fine print underneath the ticket headline on the website. It was for ONE adult OR ONE child, not both, for 54.00, which is still a bargain considering one child is 71.00 at the park plus tax. OK, enough fussing about THAT!  Here comes the good part...All about Legoland and the fun of seeing the joy on the kids' faces as they explored it.

Here is a little overview of the sections of the park: 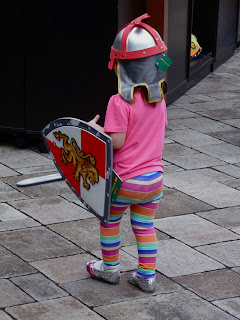 Legoland is for little people and big people! It's clean, it's cool, but it's also going to compete with your wallet for all the stores interspersed among the rides, which kept the kids wanting to buy stuff before we ever got on a single ride. The first stop was a castle area, the Lego Kingdom with a roller coaster. Eldy and Trevor and Brooklyn all rode, Sparky stayed firmly on the ground, despite Eldy's best pleas for being a good sport and going on it. Nope, not gonna happen! The castle area was where swords and shields begged for a kid to purchase. This little gal's parents caved in and bought the whole nine yards.

We managed to keep Trevor away from spending his money too soon. We kept going....There are many, many Lego statues throughout the park, and they are interactive. Go up to one, touch it and conversation starts, anything from a knock-knock joke where the statue waits for an audio "Who's there?" response, and taunts you for not answering quick enough, to a guy snoring on a park bench. 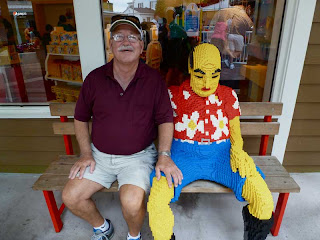 The kids had to climb on the statues and Brooklyn was a very cooperative photo subject, as you will see. Everywhere we went, it was, "Take my picture and send it to my mom!" "Take my picture!" (Her mom and dad and siblings went to Venice Beach while we took the two youngest kids to Legoland today.) 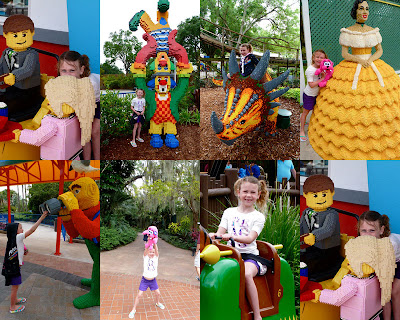 She had a ball at the park, and Trevor did, too! There are all kinds of fun "schools" for the kids--flight school which is a roller coaster ride, driver's school sponsored by Ford and a boat school. The driver's school was very cool. After a long wait inside, accompanied by a video that shows how they constructed a full side Ford Escape made totally out of Legos, the kids headed outside to the driving part and the adults watched alongside a fence....The Ford Escape right outside the driving school was made out of over 380,000 pieces of Legos, weighed over 2,000 pounds and it was AMAZING! 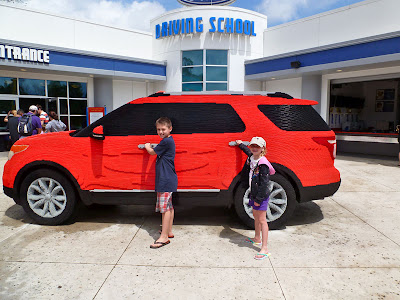 How they get all the curves and angles to show in the car using completely little rectangular pieces of Lego is a little beyond Sparky's imagination, and an engineering marvel. It was very very cool. 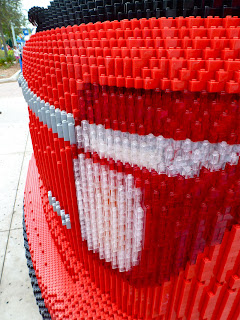 The kids went out on a full kid sized street equipped with real stoplights, directional arrows and little Lego cars that were powered by an actual "gas" type pedal and brake. There were two age group sections for kids. Trevor and Brooklyn were in the 6-12 age group. We think they were battery operated cars, they only went a couple miles an hour. It was fun to see how kids from foreign countries were driving on the wrong side of the road, causing minor fender benders and traffic jams. All the kids attended a little orientation session beforehand and were told to wave their arms back and forth if they ran into trouble and the supervisor would come and help. There was a lot of arm waving, and the supervisor was doing a lot of running around. It was funny to watch! Here's Trevor waiting for the light to change green. He did a great job of paying attention to other cars, signaling and stopping when he was supposed to. Others, not so much! 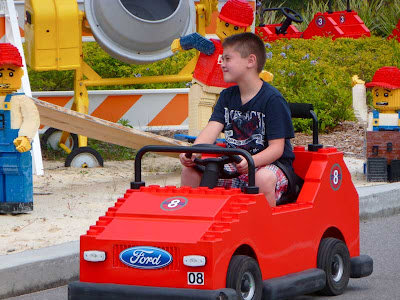 Then, the kids tried "Boat School". Trevor was the pilot. You might say he flunked...He couldn't figure out how to steer the boat, but to his credit, the steering was VERY loosey goosey. Everytime we looked from the sidelines, he was facing backwards on the water course, and boats were jammed up around him. We cringed. 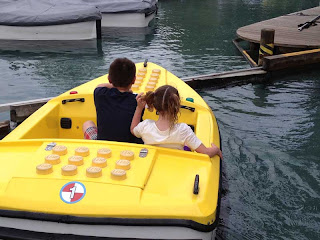 One of us probably should have gone, but we thought the kids would be able to manage ok without us, and eventually, they did. He eventually got the boat turned around with some helpful advice from passers-by, got the boat through the course and back to the dock.
Brooklyn went on one roller coaster ride and she was done. As she got to the first height of the first drop she said, "I'm scared! And her eyes got as big as saucers. She screamed all the way through but didn't cry, and when they got off, she said, "I want to do that again!" But she changed her mind when presented with another chance for another roller coaster ride. They weren't wimpy rides, Eldy said, so Sparky completely empathized with Brooklyn and we went off to explore a water fountain while the boys rode the coaster. Brooklyn is a water bug, and she had a ball simply running around this fountain and making sure she caught every water spout as it sprayed. 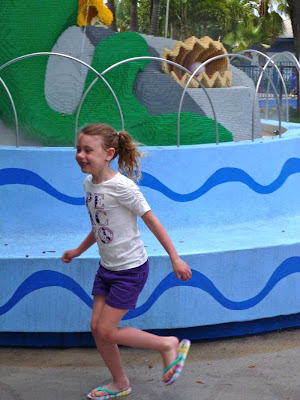 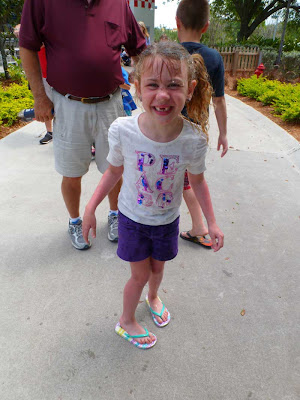 She and Sparky had a great conversation while the fellas were riding the coaster. It was all about "frenemies". Apparently, Sparky misunderstood or didn't quite hear her as she went through quite a discussion about adding the "s" onto the word "frenemy". Which means in kidspeak, you are friends one minute and enemies the next. She and Trevor (Eldy's grandson) have that kind of relationship. "Oh-h-h-hh...." says Sparky, now understanding. Young kids sure are a lot of fun to talk to, as long as they talk loud enough for aging ears to hear. Sparky now understands why her mother used to say, "Hmmmmmm" a lot, and "un hunh" and utter a lot of vague monosyllabic answers whenever the grandkids were around. :-) And when you are missing your two front teeth, it made for a little more difficulty understanding!

The kids got to ride lots of rides...No extra charge...There is a water park inside Legoland and that is a separate charge. 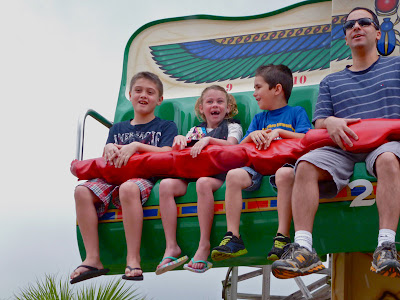 They went fishing for prizes and each got something... 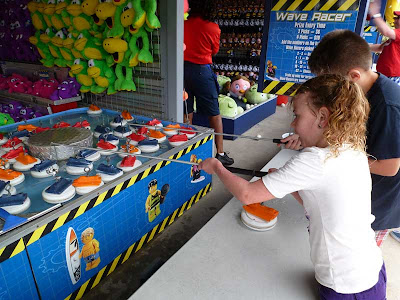 Sparky thought their prizes were soft and cuddly...so she said she thought she might like to keep them. 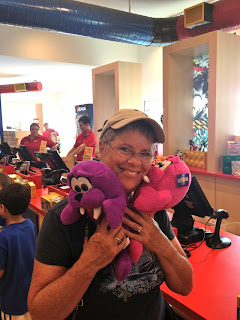 Brooklyn, 6, looked at her and said, "Nope! Not gonna happen!"

The kids were great, and after a full day of walking around, Trevor started complaining that his feet hurt and we needed to go home. He had been wearing flip flops all day. How he could do that, we don't understand, but we were ready to go home, too!

"Did you guys have a great time today?" Yep, they sure did, and we did, too! 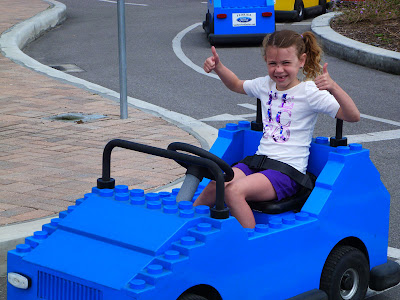 We were all tired and worn out, but the kids enjoyed being away from their older siblings, and the parents were appreciative that we took the youngest ones out for an outing.....There's just a little more to tell you about the park, and that's coming tomorrow. Stay tuned for part II of Legoland, FL.