Sarasota, FL       High:  85       Low:   65
Not much going on, folks! Sorry! Sparky has been making breast cancer people pins like crazy, because she got a nice order from the folks at Anytime Fitness in Goshen, IN....Laundry has come due yet once again.....If Sparky cooked, she could share recipes, but as you all know, she doesn't! Cook much, that is! (She should have left it at "doesn't"! says a wishful E.) Well, she does fix breakfast and occasional lunches, so she's not completely neglecting her household duties....Sparky's idea of a breakfast at home is leftover pizza and a Coke, so you can see she is DEFINITELY cuisine challenged!  We know Sherry and Karen are wincing right now....That's why Sparky plays so much pickleball, so she can have her pizza and Coke, too! Sparky does make a great imitation McDonald's Egg McMuffin sandwich. She uses one of these cute little microwave dishes, a Nordic Ware "Egg 'n' Muffin" cup to make the perfect one egg round to fit on the English muffin. She picked this little dish up at Camping World for about five or seven bucks. 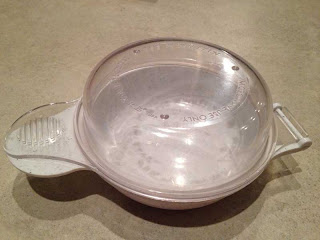 The English muffins have to be BAY'S English muffins, no other one will do! That was the brand Sparky grew up with and has always loved. A slice of Canadian bacon --which is not as bad for you as bacon or sausage, right?  A slice of cheese, and one egg microwaved for one minute in the Nordic Ware dish,  plop it all on the muffin and it's delicious!

What's weird about Sparky is, she collects recipes...SERIOUSLY! She has a whole BIG file folder full of them in the RV. And she buys recipe book collections from the grocery store on a fairly regular basis. WHY??????!!!!!!! Eldo wants to know! Well, because SOME DAY (don't hold your breath) when we come off the road and have a decent sized kitchen, Sparky just MIGHT get back into the cooking scene. Notice she said MIGHT.....  :-)   She just likes thinking and reading about combinations of ingredients, watching occasional food shows, and thinking about how good a recipe might taste. Sometimes she will even occasionally cook recipes from Publix, because they are fast and easy, so not all hope is lost. Eldy is still hoping.....   :-)   Now, before someone says, well, Eldy, you could take over the cooking if you enjoy it, we have to say, Eldy really doesn't know how to cook...But he does manage a great grill. AHA! Sparky will figure out how to cook EVERYTHING on the grill, and problem solved! Cooking duties transferred! Piece of cake, so to speak....Eldy's not worried, and he says,

Did anything else happen today? Yeah...Sparky saw a little boy wandering through Sun 'n' Fun's Welcome Center parking lot with NO PARENT anywhere around! That's a busy parking lot with lots of people going in and out of the park in vehicles. Sparky's newly honed grandma busybody/nosey skills kicked in.  He was about four years old, and spoke a foreign language. Sparky wasn't sure if the language was French, but he was definitely lost and trying to find his parents. She rode quickly to the office and told them about the little guy wandering across the parking lot. Together, with a young park employee, we corralled the little guy, her walking and Sparky on the bike...It wasn't easy. He wasn't going to take her hand and come with her willingly to the office...He was bound and determined to find his parents, but was getting more scared by the minute. When Sparky saw him run away from the park employee as she approached, she rode her bike over to where he was and cobbled together some words in French about his mom, his house....He stopped and let us take his hand at that point. We sat him down next to what we thought was his rig, knocked on the door, but nobody was home. The neighbor across the street said his parents were at the pool. How he got away from them, nobody knows, but she went to get his parents and inform them their son was out in the parking lot! Scary! It turns out the dad was Swiss/German, and he didn't seem too perturbed that his little son had gotten away from him. He wasn't upset in the least! Sparky would have been almost hysterical if it had been her son!