Back to Fun in the Sun

It's getting hotter, thank goodness there's a breeze...The weather is a little wacky in a lot of places. Sparky's daughter in D.C. says it was 30 degrees there just a couple of days ago and in the eighties today and going to drop back down in the fifties in another day or so...Very inconsistent weather there.

What did we do today? Not much...Sparky hung out at the pool for a bit...We drove around looking at neighborhoods for awhile. Cranes are everywhere. They are a protected species in Florida and don't they know it! 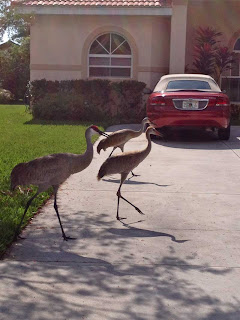 Eldy is thinking about waxing the rig...He started thinking about it last week. He's still thinking about it... :-) Sparky is still thinking about what can she cook for dinner, but that's been an ongoing thought process for months! So we ate out tonight... At mi Pueblo, a TERRIFIC Mexican restaurant with three locations in Sarasota....It's been highly recommended by several people, so Sparky finally convinced Eldo to take a shot at it, even though Mexican food is not his favorite. Sparky loved the decor, especially the pierced tin lighting. The wait staff was EXCELLENT, nice waiter, the service was quick, we hadn't even been seated for three minutes and chips and salsa were on the table. 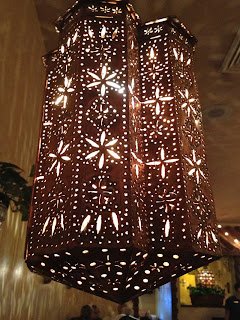 By the way, for you beer drinkers and craft beer lovers, there's a cool app called Untappd. It's a beer lover's app sorta like Facebook. You can check in at a local brewery or restaurant, pick the beer you choose to drink, rate it, and share with friends and take a photo of the beer while you are at it if you want to remember what it looks like. You can see your friends' recommendations, what they have to say about it in the notes section, and what they rated their favorites. It's a great way to keep a log of all the different beers that are available all over the country, especially if you are an RVer and travel a lot. Kinda fun to see all the weird names of beers. One of Eldy's friends has sampled Snake Dog IPA, Raging Bitch Belgian IPA (wonder what the story is behind THAT one!), Heavy Seas Small Craft Warning (yes, that really is a beer), Mana Wheat beer, brewed with pineapple juice, and more. It's a fun way to communicate with your beer drinking friends....Sparky will stick to wine, she thinks they need a "wino" app, complete with the slogan, "wine a lot, you'll feel better!" They probably have one. Sparky doesn't drink enough different types of wine to even begin to rate any of them.

Back to the food....Sparky had Tacos Sudados--soft corn tacos with shredded beef, onions and lots of cilantro. Rice, beans and green tomatillo sauce...YUM! Looks kinda gross, but it was very delicious! 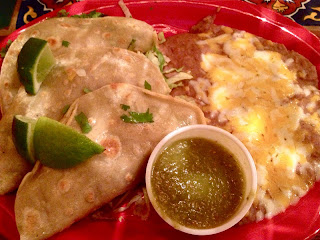 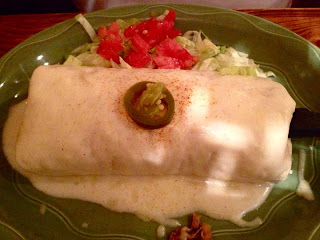 It was a battle to get him to try it, but he knows how much Sparky likes Mexican food.  Once he was in, he enjoyed it very much...Until tomorrow.....