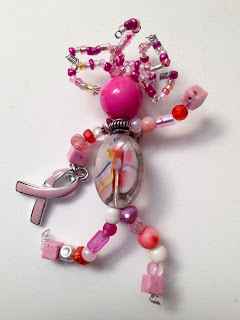 Off to North Port this morning to get some breast cancer ribbon charms. Sparky is on a roll making little people pins for Relay for Life back in Elkhart, IN, Eldy's hometown. Eldy's daughter, Kristi, has been spreading the word about Sparky's breast cancer people pins, so she and Sparky are going to have a joint fund raising effort to raise money for Relay for Life. Kristi will do the advertising, and spreading the word back home in Indiana, and Sparky will make them. Relay for Life is going to put a photo of them on their Facebook page and website. Sparky's sister has had breast cancer three times and is a survivor, so Sparky wanted to do a little something special for that cause. Three dollars of every sale of the pins will go to Relay for Life, Elkhart chapter. The pins cost 10.00 each and are about two inches long. Sparky enjoys making them even if they are a little fiddly with the wire and tiny beads and take some time! They are posable, so Sparky makes each one look like it's a little dancing spirit....Fun!

We looked at some model homes in Venice today...St. Andrews East.  One thing you learn about looking at builder homes and models in Florida, some builders don't tell you what the extras in the models cost.  You go into one, you really like it, THEN you find out the actual setup of the home and how it sits consists of thousands and thousands of dollars of extra upgrades which are NOT a part of the quoted costs. It's a real hunt to get at those costs. Other builders post lists of upgrades and their costs so what you are looking at you can pick and choose which extras you like and which ones you can do without, and you'll know exactly how much it will cost you. And a third class of builders outfit their homes with everything in place, upgrades included in certain models, and the price you see listed is the price you'll pay for the home. Unfortunately, those builders are a ways out of Sarasota....in other communities....Too far away to still call Sarasota home.


We did see some cool stuff today, like these dual ceiling fans in the main living area of a model house. They were tilted sideways at an angle and both hung from a central beam in the living room. 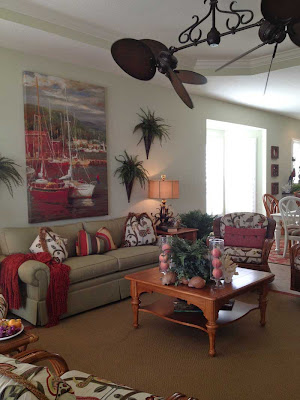 In the kitchen, was a really cool breakfast nook table, definitely Florida style. Sparky liked it! 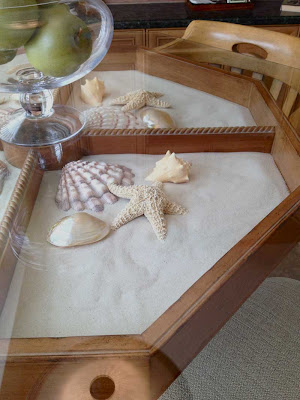 And round rugs seem to be everywhere. Because so many Florida communities' houses are based on long, narrow, rectangular houses on narrow lots to make the most of Florida real estate in master planned communities, Sparky figures the designer in this home was looking to soften the angles in the living areas. The round rugs are in many of the builders' models and were in several different rooms in this house alone..... 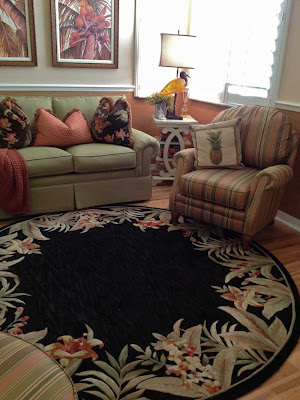 We're having fun just looking around, learning about how the whole real estate system works around here. It's amazing how fast the extra fees, HOA fees and other costs add to the price of your monthly costs. We've mentioned them before, so we won't mention them again...We're still planning on heading out of Sarasota at the end of the month, heading towards Texas, so no worries mate! Sparky and Eldo will be hitting the road in less than three weeks. With a real estate building boom going on, prices are climbing frequently in new homes, and previously owned homes are heading on an upward tick as far as values here in Sarasota. That's good for the local economy, that's for sure! We've seen houses that were purchased in 2008 at crazy high prices selling for half the purchase price now....

There's a shark's tooth festival coming up this weekend in Venice...Hang around, Sparky and Eldo still have some exploring to do in Sarasota!