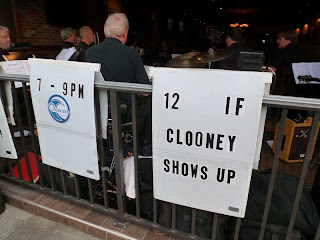 It's heating up around here....can't imagine what summer must be like! Thank goodness, there is a breeze often as the evening winds down, cooling things off.

Last night we went to Ocean Blues supper club, our favorite music venue in Sarasota to hear Ocean's 11. It's an 11 piece Big Band jazz band that has a couple of our favorite trumpet players, Shane Chalke and Steve Rolland, and our favorite drummer, Brian Post. The club opens up the doors on one side of the club totally open to the street so they can fit the whole band in. 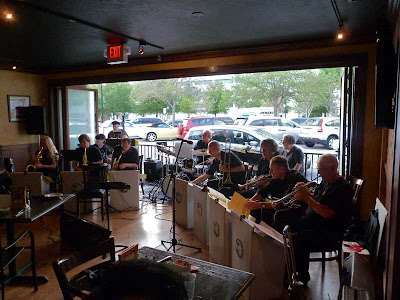 We've gotten to know these guys in the band a lot better since we've been visiting Ocean Blues, they are so great about coming out between sets and talking to the customers. They know that Eldy made trumpets and horns for 43 years, so they appreciate his efforts and work. As a matter of fact, Eldy worked SEVEN DAYS A WEEK for 30 YEARS before being able to cut back his schedule to let others take more of the work load. He was the supervisor, so he had to put in the hours to keep the department going, it was a really small, family owned company.

Last night something really special happened, on the eve of his 65th birthday...The drummer, Brian Post, dedicated a song to Eldy....Eldy was so surprised! The name of the tune we don't remember, but it was a wonderful gesture and almost brought Eldy to tears. He turned to Sparky and said, "That just kind of makes it all worthwhile, all those years of work, to see these guys play these horns and hear this wonderful music." It was sort of like a thank you from the fellas, for all the sacrifices he made while working to raise his family.....

What capped it off and REALLY made it extra special, was Steve Rolland played a pocket trumpet during Eldy's dedicated song. 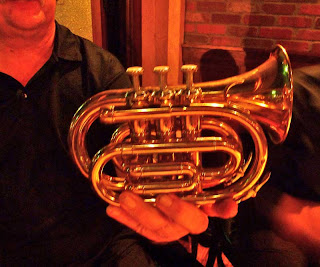 This is a little teeny trumpet that is sort of a novelty but still sounds cool. Steve said they made them during Prohibition so musicians could sneak them into joints where music wasn't supposed to be allowed. Eldy hadn't seen a pocket trumpet, what his department called a "piccolo" trumpet, in over 30 years. That just made the song even more special!

It wasn't super crowded this early in the evening, so there was room to get a nice table and see the band. You can bring your family into the club to eat and hear the music on one side of the club. Sparky spotted a dad with his son, acquainting him with how to use a cell phone for fun. Ah, times have changed, haven't they? 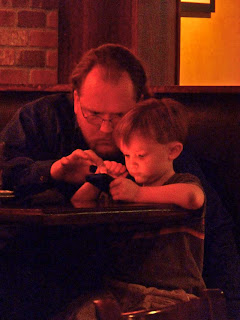 We had fun, the music was fabulous, and every Saturday night for a few more weeks, you can hear Ocean's 11 at the Ocean Blues Club on Hillview Street  if you are in Sarasota, from 7-9 PM. Don't miss them! Great bar food and great music just about every night of the week. Blues Jam is every Sunday, Monday nights are Jazz Jam nights and plenty of other great musicians and bands are playing the nights in between. Eldy won't forget this night for a long time! 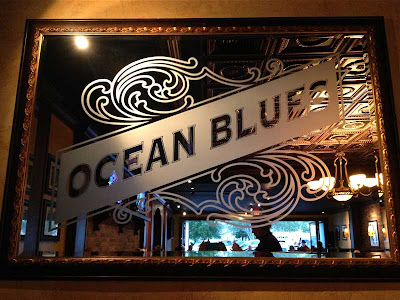