Ordinary Days are Piling Up

We have eight days left here in Sarasota......We've done just about most things we wanted to do...Hard to believe we have been here almost a full five months! WOW! Where did the time go? We missed seeing a polo match, the season ended in early April. We'll catch that next time...

Sparky spent the morning playing pickleball. It's getting harder to find people down at the courts! We're getting desperate for warm bodies to play, so this morning, Sparky offered to chase balls for a bit for a fellow practicing his killer serves until somebody else showed up. Eventually, we had three sets of couples playing doubles going, so that was great. Eldy missed the Siesta Key college beach volleyball tournament this past weekend. Well, phooey! He thought Sparky deliberately didn't mention it, :-) but nope! Sparky just didn't see info about it until after the fact.

Laundry today.....Sparky signed up for a beading class later this week..She's gonna give that leather wrap bracelet another chance...She wants to make one similar to this: 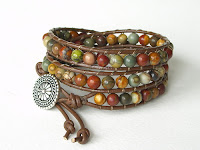 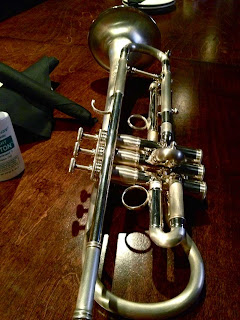 We went to Jazz Jam at Ocean Blues in downtown Sarasota, one last time this week....Every Monday night at the Ocean Blues Club on Hillview Street from 8:00-11:00, a great group of musicians get together and jam! Usually new singers and drummers show up, and other musicians, so the mix is never quite the same. It's fun, the music is great, and they have good food besides. Can't beat that combination! Both the entertainers and the owner, Scott, are so friendly and welcoming to everyone who visits the club. Scott even reads our blog!

Sparky got the pizza...It's m-m-m-m-m-good! Eldy had pretzels...fresh and delicious! Our favorite guys were there.....Shane Chalke, the trumpet player....He was having valve trouble with his trumpet tonight...So he came and plopped it right down on our table, chatted with us while he lubricated the valves and he was good to go again...We talked about North Carolina, where he's from, Eldy's job making trumpets and trombones, Sarasota culture (there's a TON of it here), and lots of other things....

He is ONE fine trumpet player! 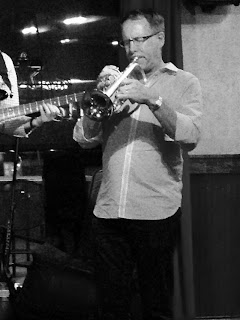 Ocean Blues is such a cool bar and grill! We love the atmosphere....It's cozy...The low lighting is conducive to listening to great music--jazz or blues... 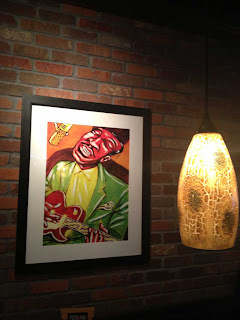 They have entertainment just about every night of the week.... 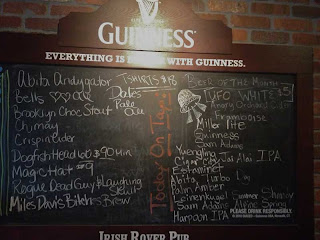 Oh, wait a minute! That's the pretty impressive beer list! Here's the entertainment list...Did Sparky say they have music every night of the week? Yeah, baby! 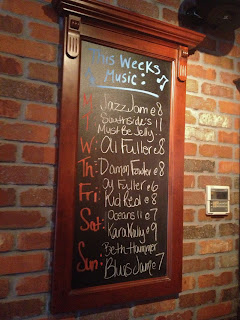 Our favorite guitarist is usually there on Monday nights--Steve Arvey....He had a PURPLE guitar tonight. He broke a string, so here he comes to our table, plops down the guitar and fixes it right in front of us. "How many guitars do you have, Steve?"  "Oh, probably about 30. I could buy a house if I sold all my guitars!" 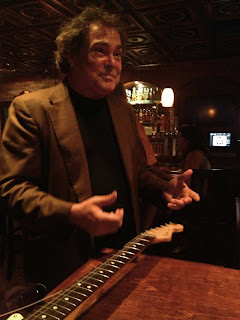 Nice guitar! He said he bought this purple guitar back in the day when he played with a band with a bunch of girls, and everything had to be purple. Sparky can't remember the name of the band, but it was a funny one! 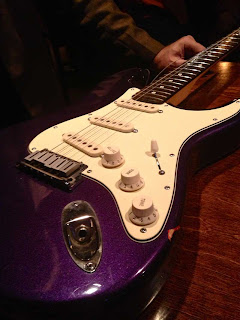 Steve did a great job playing tonight, and always gets excited when a new talent shows up at the Jam Sessions who is really really good. A woman by the name of "Nancy", showed up and did she have some vocal chops! Steve's expression when she started belting out a song, was one of pure joy, that's how good she was!

Some more great players were there and are usually there every Monday...Steve Rolland on trumpet, Ed Kinder on keyboards and sax, Brian Post on drums, and man, Bryan did a fantastic job on a song that we heard as we were heading out the door. He sounded a LOT like Louis Armstrong! But it was getting late, and we needed to get home. We'll be back next Monday night, Sparky is sure!