Where Did the Winter Go?

Wow! April already....Eldy's 65th birthday is coming up in about two weeks...He's excited because he went on Medicare this month. For the last week, Sparky has heard "only ____ more days until I can have the "BIG ONE" and it will be mostly paid for and no more high deductibles." It's weird to be excited about going on a government program, but Sparky is sure she will get excited, too, when the time comes. She's got two more years before she can be on it.

Where did the winter go? Does it seem like time goes by faster when you are retired? It sure does to us! We've been very busy exploring Sarasota, and we're still not done. The other night, we checked out Pincher's Crab Shack. The kids have been wanting to know who has good seafood, so naturally, Sparky says, "we need to check it out so we can give them a good recommendation!" Eldy tried a stone crab for the first time. 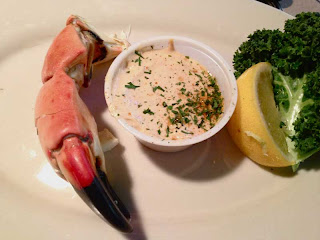 Look at all the equipment they give you to get into a stonecrab leg! THAT was a little intimidating, but Eldy dove right in with the hammer. 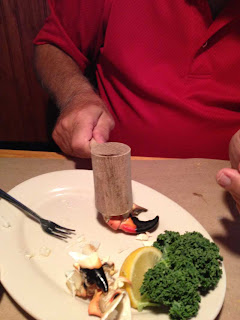 Actually, the nutcracker style crab claw cracker (say THAT ten times really fast!) worked the best. :-) Sparky had the sinfully calorie laden shrimp scampi, heart-attack-on-a-plate, but she's been playing lots of pickleball so she splurged. It was SO-O-O-O good! 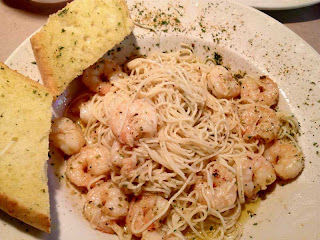 Besides that latest cuisine endeavor, we decided to extend our stay at Sun 'n' Fun one more month all the way through to the end of April. Woo-hoo!  We still want to see the circus, the Robinson Preserve, kayak some, and see some more great music talent here in Sarasota. The sad part is that many of our new friends that we have made in the park this year, are leaving and heading north for home.

The first two days the kids and grandkids have been here, the weather has been great. We are having fun showing them the town and letting them know what there is to do. They went to Siesta Key Beach today and had a great time. 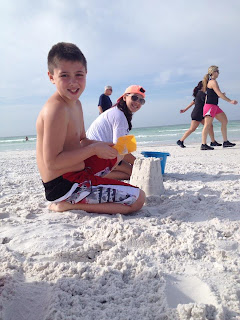 We stayed home and did our own thing. Sparky played EIGHT games of pickleball, then decided she'd better go invest in a knee brace. Thirty-four dollars later, she had this one: 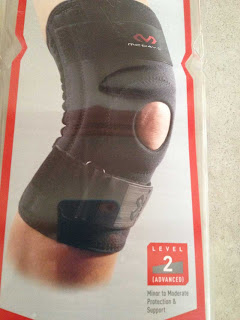 Sports Authority has a bunch of different styles in three levels of support---1, 2, and 3, one being the least amount of support, three, being minor to moderate support. Sparky got the level 2. It has "stays" in it...Remember those little things that used to be inserted into men's shirt collars? These are giant ones running along both sides of the brace. The box says, "moderate support helping to relieve symptoms and recovery from chondromalacia (runner's knee, affects the kneecap), patellar subluxation (where the kneecap gets a little out of place), and tendonitis." Sparky figures it's tendonitis for right now, so this brace oughta help. If it's not, she's going to practice saying these other knee problems so she'll impress the doctor when it comes time to go see one!

Later, we joined the families at the pool.....Sparky really loves talking to little kids and playing with them, so she was a hit having a quarter handy for diving practice with the littlest one in Steve's family. 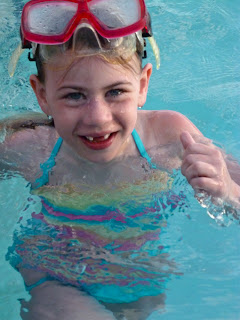 It's serious business playing in the pool for some of the kids. This is Eldy's grandson, Trevor. 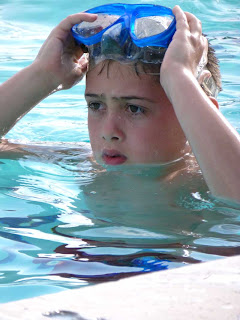 And not so serious business just relaxing by the pool.... 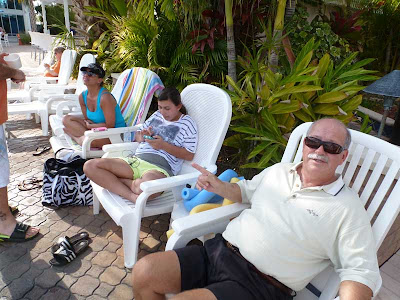 You never see Cate without her music... 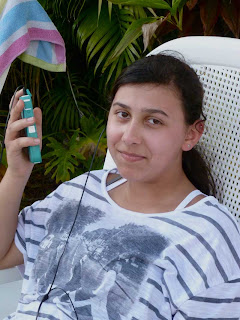