Finally made it to Robinson Preserve today....We had heard a lot of nice things about it and so we checked it out. Hours are from sunrise to sunset. It's located on the northwest side of Bradenton at 1704 99th Street West. It's Sparky's kind of place--hiking, biking, an observation tower, a canoe-kayak launch, non-motorized bike trails, fishing off the piers and bridges, and wildlife viewing. It's a beautiful place.... 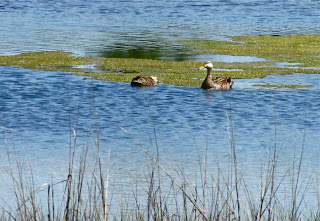 Big ducks in the ponds, egrets and herons flying around....multiple bridges to ride or hike across....We took a little 10 minute hike today to the observation tower from the entrance gate.... 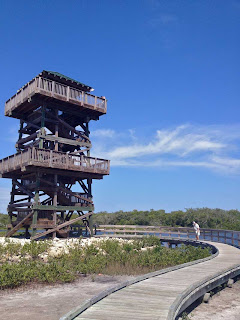 It's an interesting tower with four corners sculpted into animal life, the fourth one had been broken off. Hope it wasn't vandalism! 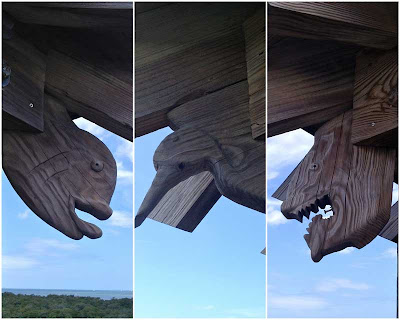 There's a beautiful view awaiting for you at the top with a nice ocean breeze usually blowing. We could see the Tampa Bay Bridge in the distance, and even the Tropicana baseball stadium the skies were so clear. We saw standup paddlers coming through the bridge.....Sparky's camera batteries died after about two shots, so camera phone photos will have to do! 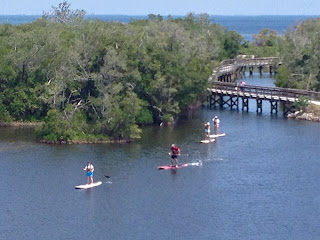 It was wonderful to look down below..... 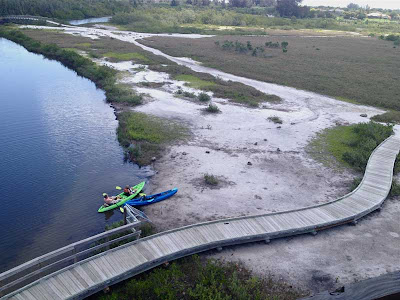 They have a fitness trail at Robinson Preserve with six stations if you are so inclined to work out doing jumping jacks, a balance beam pull ups and dips, crunches, leg exercises, push ups and stretches. As today was 88 degrees, Sparky and Eldo decided NOT! They have seven walking/riding trails that range from 0.19 miles to 3.08 miles....so plenty of variety for short hikes or longer ones. We were wishing we had brought the bikes, but didn't. Sparky has arthritis in her left foot and ankle, and the old knees are creaking mightily, more so in the heat, it seems, so going for a long walk on a hot day is not as appealing as it used to be. Riding her bike? Yep! That will work for next time we come.

With the kayak launch, you can paddle to the Manatee River, the Perico Bayou and Palma Sola Bay. 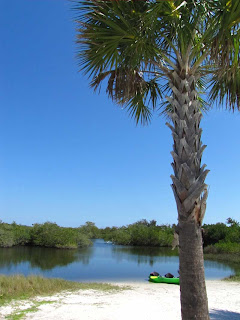 The welcome center at the preserve is a beautiful historical house called the Valentine House. 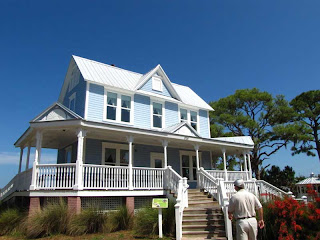 There's some history of the area inside, and an interesting story how the house came from someplace else....On a barge by sea, and on land to get to its current spot at the preserve. 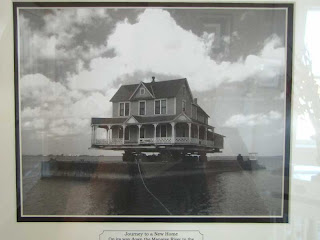 A volunteer was talking about a nest of bald eagles at the other side of the preserve, and the babies were just learning how to fly. We wanted to see them, but not wanting to walk all the way to the other side of the preserve. It was really really hot and there was no shade. Now if we had had our bikes, we would have ridden in a heartbeat to see if we could see them.

We would definitely like to come back to Robinson Preserve, we just don't know if we'll have time!

On the way home, we attempted to have a lunch at Star Fish Seafood Company, in the historical fishing village of Cortez, in Bradenton. It's a really really old place where the locals hang out, and the food is highly rated on Yelp and a couple other places. It looks like a dumpy little place from the outside, you are in the heart of the historical fishing village right at the docks with the old fishing boats. But it's one of those gems where people come by the bunches to try and get in there to get some really good seafood. 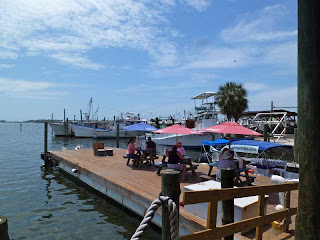 Word has gotten out about how good the food it, and it was JAMMED when we got there at around 1:00 PM. The place opens at 11:30. The place is so old and quaint, there's hardly any place to sit to meet the demand of those wanting to sit and eat. A few tables set up at the back of the fish market, and that's it! It has the kind of atmosphere like you feel you are sitting outside in a shack just outside the market, like where maybe they used to go for cigarette breaks when they first started selling their fish up front at the market. It's grown to be so popular, that they added tables out along the dock, and then some more picnic tables to the right out in the sun to the left of this photo below. 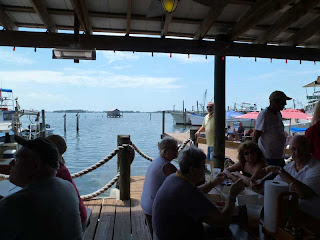 As much as we wanted to try it, the line was too long to place your order, and there was no place to sit, it was so busy. You place your order at the window, and they bring your food out in boxes, like to go food....The food looked WONDERFUL, but we decided to try it another time when it wasn't so busy. You probably have to get there when they first open or late at night, closer to closing...Hours are Tuesday thru Saturdays 11:30-8:00, and Sundays and Mondays, 11:30-3:00 PM. Mullet was their specialty, two portion sizes, at 7.50 and 10.50. Lots and lots of seafood choices....among them pompano fish, shrimp and grits, and most of their seafood is harvested by Florida fishermen. Sandwiches ranged from 5.95 to 12.95. We'll definitely check this out again if we can before we leave..... 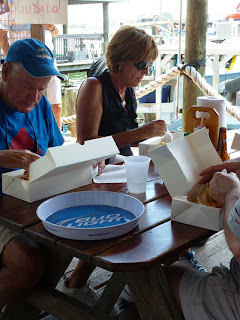