We've been seeing this little sign for a place called the "Mount Desert Oceanarium". It's all about lobsters and learning more about how the Bar Harbor lobster hatchery works, see a "hands on" kind of place for little kids and big kids, and learn everything lobster. We  decided to check it out. For 13.50 a person, you get to see and touch and feel some cool animals from the ocean, hear a lobsterman talk about 60 years of hard work, see a cut away view of an old lobster boat and some lobster traps, and view some interesting exhibits about sea water. It was just great! It's a tiny place, and they apparently had a fire, which destroyed part of the place, but it looked great today. It's kind of a little place that someone had a dream to make a place where families and visitors could come and learn about something very important to the area, lobstering. Informational signs are handwritten which just added to the cozy charm of the place. 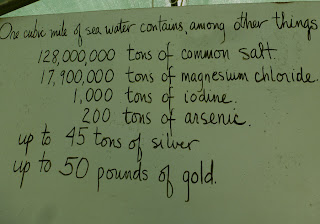 The whole thing is contained in several different rooms, the total size about the size of a small ranch house. There's even a little gift shop there which had some nice things. It's very charming. 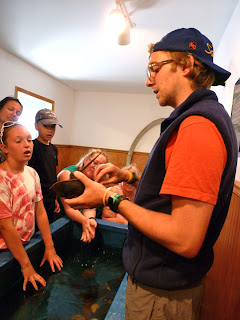 Sparky loved the Discovery Pool Touch Tank...One of the young guys, we think he was a college student working there for the summer, gave a half hour talk about the different animals found in the ocean in the area. He takes each creature out one by one, you dip your hands into salt water so you can handle them. He passes sea stars around, a scallop, a sea cucumber, and several more species and you get to know them up close and personal by hearing lots of facts about each one. We learned some great stuff today...the most interesting creature was the sea cucumber..It was slimy and felt like a miniature jello football. The sea cucumber ejects its intestines and stomach contents when threatened by a predator, hoping that the predator will eat that stuff and not the sea cucumber! He then grows a new intestine in a short period of time. UGH! But interesting! While he was holding the sea cucumber, it squirted something out one end. Sparky asked if it was peeing, but no, it was just ejecting water that passes through its body. (Can't take that woman anywhere without her asking embarrassing questions! mutters E.) This creature (mollusk?)  can take his "foot" and curl it all around inside his shell and "shut" the "door" so a predator can't eat him! 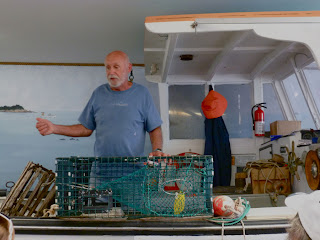 We saw a BLUE lobster and learned some interesting facts through the exhibits. Here Eldy is trying on a pair of goggles that shows you what a lobster sees, which is like looking a one object split into multiple views. He saw a BUNCH of Sparkys, which scared him half to death, because ONE Sparky is plenty enough to handle! 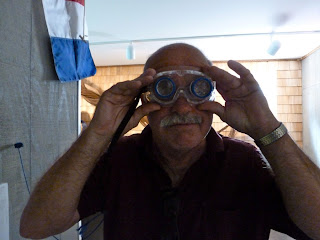 Then we listened to a young woman talk about the lobster hatchery. It is a small operation, but very successful in raising lobsters to a young stage to be released into the ocean. She showed us a pregnant lobster with THOUSANDS of eggs attached to her body waiting for the right time to release--when the eyes on the little bitty eggs are bluish. That brownish mass? It's thousands and THOUSANDS of eggs! 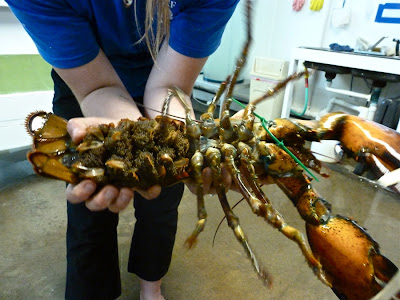 In the initial stages of release, the lobsters are called plankton when they are very very tiny, so thousands of them get eaten by all the fish and predators in the sea that eat plankton, like whales. Not a lot of lobsters make it to adulthood, but they can live up to 50-100 years if they do!

Did we enjoy our tour of the Mount Desert Oceanarium today? We shore did! We highly recommend it! Still waiting to go on a hike, Eldo! (Sigh! he says...) Tomorrow should be a REALLY good day for one, with perfect weather conditions...sunny, highs in the seventies...In all fairness to Eldy, he was ready to go for a hike today, but our mi-fi totally quit working. Sparky didn't want to mess with hours of tech support, so we headed to Bangor, Maine to the nearest Verizon dealer. After an hour of the Verizon guy talking to tech support and trying everything under the sun, rebooting, taking out the sim card, the battery, resetting the mi-fi at Verizon's end, we found out we had a bad sim card. Replaced the card, and voila! We have internet again! Whew! Just a few hours of the thought of not being able to get our mi-fi fixed for days, sent us into a panic! Yay, Verizon! Problem solved! There's only one more problem, we are going through data like crazy. But that's another blog for another day.....Bye!
Posted by Jeannie and Eldy at 11:56 PM