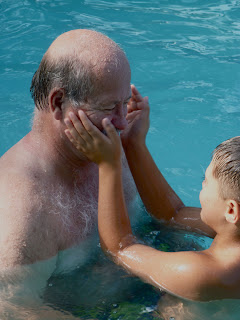 We're still trying to stay out of the heat....Trevor loves the water, so he's in the pool almost every day. Papa has been in a couple of times. Sparky has been in a BUNCH of times. Trevor LOVES to be the Splash King! 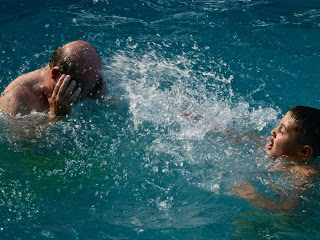 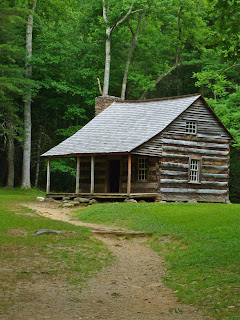 We decided to do the Cades Cove Loop driving tour late today, in hopes of seeing some wildlife. The eleven mile loop is closed two days a week early in the morning from sunrise to 10:00 AM so cyclists can ride without having to worry about cars. It's a very narrow, one way, one lane road so it would be crazy to try and bike it during the day. (And it's really hilly and extremely curvy, says E. You won't find ME biking this one! ) Sparky is biting her tongue....lol....

At first, it was empty field after empty field. Even if you don't see any animals, you can see really cool log cabins and homesteads, very old churches, and a grist mill. The scenery is gorgeous! We explored a number of cabins....It's surprising that they are not guarded or roped off in any way, you are free to go inside and walk around and touch and feel these old cabin walls. 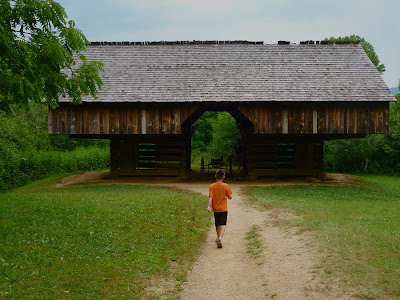 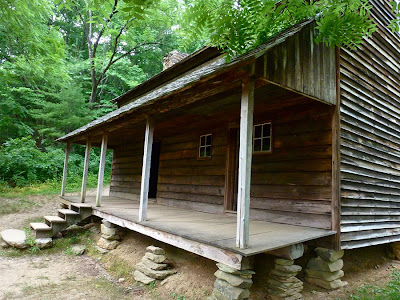 HEY! WHAT ABOUT THE BEAR JAM?  Oh, yeah...just had to show the beautiful cabins in the country first! As we continued our drive around Cades Cove Loop, we came upon cars bunching up on a curve, then taillights lighting up. We got excited because we knew that THERE WAS SOMETHING OUT THERE! In our previous travels, we had seen an elk jam and a bison jam. Sure enough, it was a BEAR JAM! A BIG BLACK BEAR! Woo-hoo!  And Sparky managed to get a fairly decent photo. The bear was about 20 yards away. Sparky got out of the car and stood by the car to get an unobstructed view with the camera. It was dusk, so photo is a little grainy...Trevor wanted to know why he couldn't get out of the car to look, so Grandma Sparky pulled the "because I'm the grownup" card. He wasn't too happy about that! 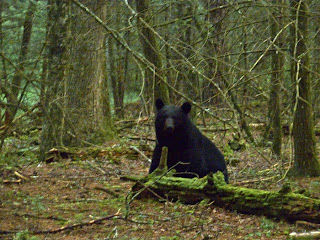 But that's not all we saw! No siree, we saw TWO bucks in the woods...apparently there were three more nearby in the same area. Guess they are "batchin'" it right now.... 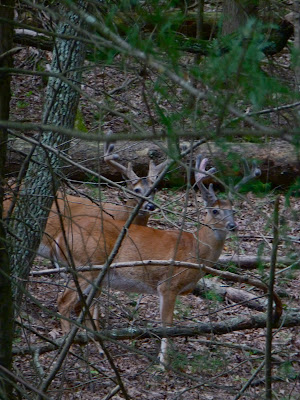 And we saw a couple of does in the fields and some wild turkeys. The kids were really glad to get to see the bear today. Trevor did a drawing for the kids' blog today about it, C & T's Awesome Adventures. It's tough to get him to write anything, but he did, with a bribe to go swimming in the pool. Sigh!  (Whatever it takes, grandma! says E.) 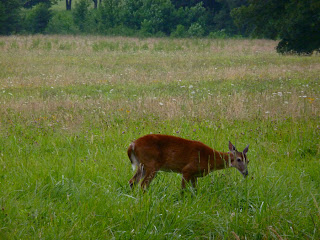 It was a wonderful way to see the park today, in the A.C.  Temperatures are a little cooler there than they are in town, but it was still in the low nineties yesterday.  It's beautiful countryside, and although the kids are not as thrilled with the scenery as we are, it's still good to get them away from their games and ipods, and see nature. 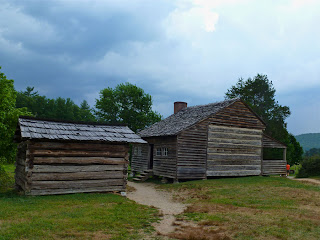 Posted by Jeannie and Eldy at 7:48 AM