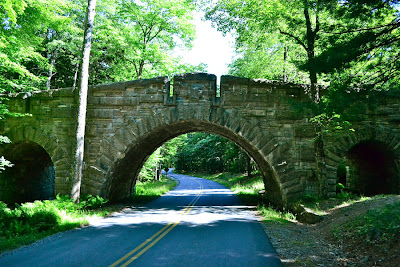 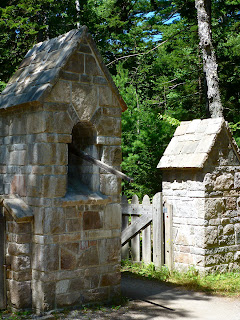 One of the most beautiful parts of Acadia are the granite bridges and crushed stone carriage roads that are all over Acadia National Park. Most of them are in the park, but some are private roads. You can bike or walk or horseback ride the carriage roads that are designated for these. The Wildwood Stables, off Park Loop Road, offers different horse drawn carriage tours and one of them is a two hour narrated tour of the Rockefeller bridges. Adult tour price for the bridge tour is 24.50 a person, and well worth it! Tours are in an open carriage but shady most of the way, you'll want to pick a day with nice weather to head out.....

On the bridge tour, you see three bridge structures, get to ride on private carriage roads, and see the gate towers that allowed passages from one carriage road to another. There used to be bells on the end of the sticks that carriage drivers would ring with their whips and the landowner's cook or housekeeper would come out and open the gates to allow passage through.

The horses that pull the carriages are beautiful. We're not sure if these are Clydesdales or Belgians, but these are the stable's horses. 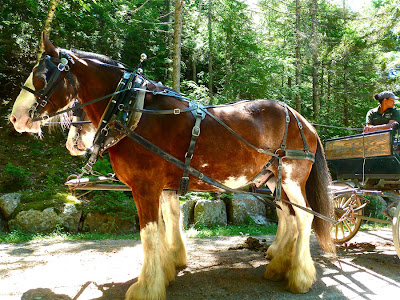 This is the carriage that we rode in. There are others that are really interesting and have the passengers all facing the front. 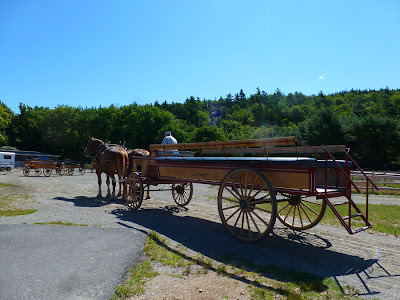 We had a delightful narrated tour from Mitchell, a spry 83 year young gentleman, who brought his own Belgians to pull our carriage, Don and Chip (?). Doesn't he look terrific for 83? 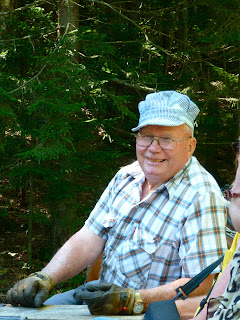 Mitchell wasn't in any hurry to rush through the tour. He would stop often and during that time we would get passed by one or more other carriage drivers leading tours. Which was fine, because he took his time, told us lots of stories and much more detail about John D. Rockefeller. The tour was really more about John D. Rockefeller than it was about seeing the bridges. We saw three bridges and one of the gatehouses in our two hour tour. 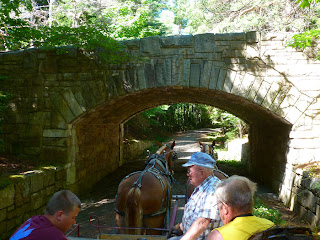 We learned a LOT about the granite carving process, how precise and particular "John D." was about constructing the seventeen bridges and single lane carriage roads. Every granite block in the bridges are precisely cut and fit to perfection. The radius on the bridge arches is measured to exactness, the roads are a precise 16 feet or 20 feet wide, no more, no less. He made them single lane as to prevent the automobile from taking over the island roads inside the park. Rockefeller had his construction teams lay a layer of pitch over blue clay across the bridge sections before laying the granite blocks, thus weatherproofing the bridges, something very innovative for its time. 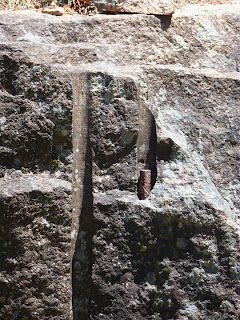 The drilling process was an amazing story in itself, how one man held a drill bit with his HANDS and a team of three other men took turns hammering the drill with mauls in sequence. If a guy missed, the drill man could lose a hand. How men built these bridges in the twenties and thirties without the use of all the technology and machines we have today is a testament to a hardworking generation that built some amazing monuments! We saw evidence of the drill bits and lines downward left behind in the stone cliffs as we passed along the roads.

Every one of the granite blocks marking the sides of the carriage roads, or "Rockefeller's teeth" as some people call them, has a rod anchoring it to the stone beneath.

We learned how concerned Rockefeller was about preserving the lands for future generations, how he was a naturalist above being a rich man, how determined he was that the land be preserved after he was gone, how generous he was in giving his land acquisitions--over 10,000 acres-- to keep the park in its natural state as much as possible.

Rockefeller along with two other men, Charles Eliot, president of Harvard University, and George B. Dorr, a leading conservationist, and others, designed and built more than 50 miles of broken stone carriage roads. Along the roads are magnificent hand made granite bridges and fabulous scenery.

The tour today took us along some of the private carriage roads, some that are only for hikers and carriages--no bikes allowed. At one bridge, we stopped and got out of the carriage to explore the Cobblestone Bridge, the first of Rockefeller's bridges, built in 1913, and the one that has a totally different look from the rest. It's made of cobbles for the main part of it along with the granite blocks. Considering all his bridges were constructed in the early 19th century, the excellent condition of the bridges some 80-100 years later shows how well they were constructed. 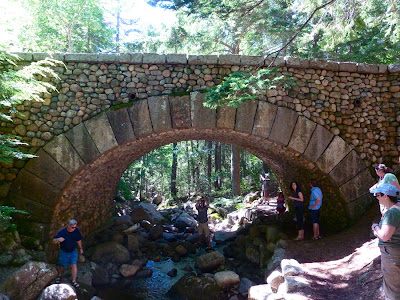 The stories Mitchell told about John D. Rockefeller made you want to go out and read more about him. He was a remarkable man, WAY ahead of his time as far as preserving this beautiful area of Mount Desert Island. Thanks to him, we have amazing places that remain unspoiled and unpolluted by cars. When you are in a carriage ride and going back deep into the forest, you are going back in time to a place that remains as it was back in the early 1920's.....

Mitchell was a delightful guide, he was so enjoyable to listen to, and he had a great sense of humor, which really added to the tour. At one point, Sparky asked, "Have you lived here in Maine all your life?" His reply, "Not yet!" He is a "Mainer", through and through, having no desire to live anywhere else but Maine. He lives about 80 miles away from the park. The stables call him in as an extra hand during the summer when they need help. He brings in his own team of Belgians who seemed to be bigger than the Belgians at Wildwood.

We loved our carriage ride tour today and highly recommend it!