Busy, Busy and the Brewery

Note: After talking about wanting to do a challenging hike yesterday, on the news this morning, we heard that a young girl in her twenties fell and died from her injuries doing one of the more strenuous hikes, the most dangerous and most challenging hike in Acadia--the Precipice Trail. Sparky will NOT be attempting any hike in the near future that involves pulling yourself up steep mountain ledges on iron rungs or any hike with steep dropoffs to one side. Once she saw the photo of a portion of the trail (see right photo), she was convinced! (WHEW! sighs E.) The bothersome thing about this, is when we were at the visitor center and Sparky expressed an interest in doing the Precipice Trail, the young ranger said NOTHING about needing to be in shape, that this trail should only be attempted by the experienced, serious hiker. They say in their literature that it's not for the "faint of heart" or for "anyone with a fear of heights", and they describe the trail in words, about how you have to use your hands to pull yourself up on iron rungs and ladders, but a photo speaks a thousand words. You'd think when a pudgy, gray haired senior citizen shows up talking about doing the Precipice Trail, they'd do their best to talk you out of it, or at least find out what your background hiking experience is, hoping the visitor will be truthful. I think they should have photos there at the desk to show prospective hikers what they are in for. But here's the OTHER bothersome part. How many people would bother to come to the ranger center first and get information? Who's to say they wouldn't just pick up a trail map somewhere and go out and venture out on their own anyway? You are the one who makes the final decision whether you ought to do something stupid or something intelligent and carefully thought out. Heck, we have enough troubles remembering to bring adequate amounts of water and snacks on a little hike. Well, not the snacks, haha...

Here is a link to the story that tells the heroic efforts everyone went to to try and save the hiker. http://www.kjonline.com/news/NH-woman-falls-60-feet-during-Acadia-hike-dies-.html


Today we moved to the OTHER Encore park, Mount Desert Narrows. Mount Desert Narrows Campground is right across the bridge on Mount Desert Island. It's actually the nicer of the two parks as far as atmosphere and view, but not quite as big rig friendly. Sites are a little more uneven, some are terraced, and there are a lot of weekend warriors that come in with travel trailers and tents. But  the atmosphere is more like a community. It's definitely a more active place with a LOT more families. We are not cut off from the rest of the park like we were in Narrows Too because we were on a special rate. We have an even better rate here, a summer special of $99.00 for the week, and we have a terrific view of the ocean/ narrows/bay. 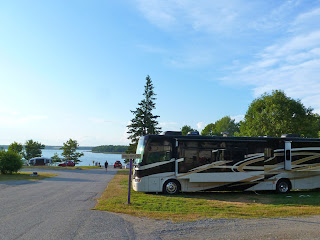 They have 10% discount rates on regular summer season rates--Good Sam's, AAA, and AARP. The parks here all charge a 3% resort fee, which seems like it shouldn't apply in a campground situation. There are lots of campgrounds to choose from in the area, but many of them are too tight for big rigs or too difficult to maneuver around in, and they are usually more expensive. In case anybody is wondering, the two campgrounds in Acadia National Park do not accept any rigs over 35 feet, nor are there any hookups or utilities at Blackwoods Campground, or Seawall Campground in Acadia.

The summer special rate is great, however, here at Mount Desert Narrows, we are in a less expensive site...30 amp, no sewer, no cable, BUT--we have a great view. The showers and bathrooms are just across the street from our site. 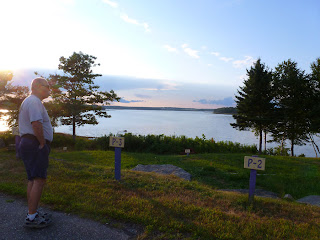 They do have 50 amp sites with full hookups (FHU) and more amenities in other sections of the park, but that is a different rate schedule. Our Verizon wi-fi is only one bar here, but you can purchase wi-fi and it's decently fast. For some reason, Verizon mi-fi worked much faster on the other side of the bridge, on the mainland. Well, duh, Sparky! 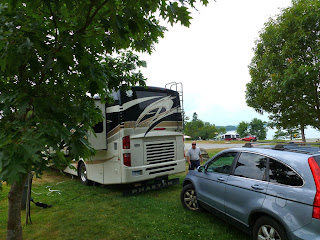 Sites are a mixture of gravel and/or grass. There are some areas of the campground with LOTS of trees, and other parts with a few trees. No cable, but seven (three are PBS) channels thru the antenna. We can't get NBC to watch the Olympics. (Boo-hoo, says E. AND Sparky). We don't have satellite service, so Eldy is making do with what we have. AT & T cell phone service is very good. There is a small pool with a very small waterslide and a small laundry. They have a canoe launch. Looks like Sparky might be putting in her inflatable Sea Eagle kayak if she can figure out the tide schedule and not worry about all the submerged rocks. 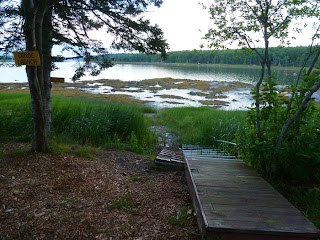 Once we got settled, we headed over to the Atlantic Brewing Company for a FREE tour and FREE tasting opportunity. Tours are every day of the week at 2:00, 3:00, and 4:00. Eldy loves microbreweries and this one was just a good as the last as far as the beers go. Since Sparky doesn't drink beer, she took photos. 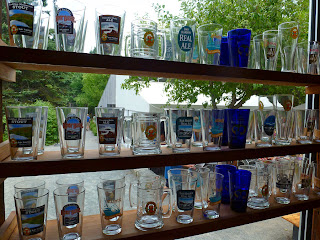 Sparky loves cool labels, neat packaging and creative names....If she had the space, she'd be collecting beer bottles from cool microbreweries all over the country! (And I'd be drinkin' 'em! laughs Eldo.) 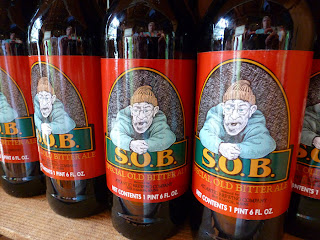 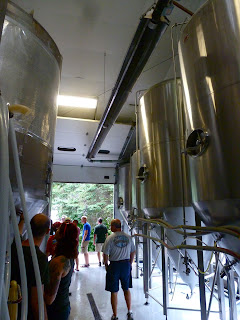 Although the tour was free, and you can't beat that, it wasn't the best tour. The young lady giving the tour spoke WA-A-Y too fast, and she was done with the entire beer making explanation, equipment explanation, and tour of the factory in 20 minutes. Factory is a loose term here, it's a TINY microbrewery with a BIG presence in Maine. Two guys do the bottling process, just to show how small the operation is. They make 13 beers, and occasional specialty, seasonal beers bring the total up to 17.  Eldy loved the Island Ginger beer and the Summer Ale. Sparky LOVED the root beer and the blueberry soda...You can't be in Maine and not see blueberry EVERYTHING everywhere!

Attached to the brewery, sort of, is the Mainely Meat BBQ Restaurant. After your tour, sit down, have a brewski and some BBQ, but we didn't. We are not big BBQ fans, so we went looking for CHOWDAH and LOBSTAH. More about that another time....
On to Cadillac Mountain this evening...It was a washout! Or should we say a FOG OUT....Clouds were rolling in all afternoon, and by the time we got over to Cadillac Mountain, heavy fog had rolled in over the summit. We saw NOTHING!  It was so windy and the temperatures so cool, that it felt like a windchill factor of about 40 degrees. Sparky threw on Eldo's down filled camo jacket he had in the car.
Then she checked out the view at the top just to be sure nothing was to be seen. It was really, really windy! Hope nobody was out on the ridge trail up there before the fog rolled in! 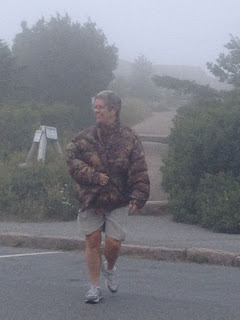 There wasn't anything to be seen.... 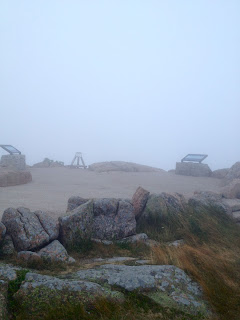