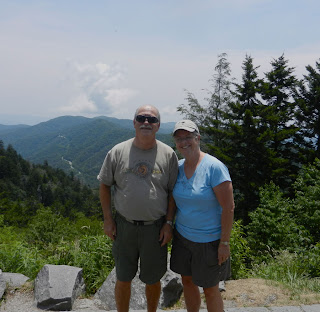 All covered with snow......Wait a minute...wrong time of the year! Sparky WISHES there was snow! (Hush, now, chides Eldo.) But we WERE on top of the Great Smoky Mountains today. At the highest point in the Great Smoky Mountain National Park, to be exact--6, 688 feet high. It's about a 22 mile drive from the entrance into the park to Clingman Dome, the high point. It seems to be pretty centrally located in the park. There is a STEEP, half-mile paved trail to the tower. Then you climb the tower around and around to the top.  I guess Old Smoky might be a fitting name for the tower that was at the height of the climb there. It was pretty cool! A LOT cooler, twenty-six degrees cooler than in the town of Sevierville, as a matter of fact. Sparky thinks she'd like to go back to Clingman's Dome every day the rest of this week to get out of the heat! 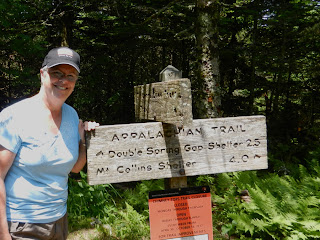 Hey, we could hike the Appalachian Trail while we are at it. (Wait a minute...wait a cotton pickin' minute, here...fusses E. Don't think the grandkids are up to a hike quite like that!) Heh, heh, heh....Let it be known that Eldo said, "This old man is going to be dead next week if we keep this up. 'Course that's because I have sat on my duffy all winter!" Un-hunh! And Sparky has a new plan of action to whip ole Eldo back in shape. (Oh, boy, I'm in trouble, worries E.) Sparky is up for a hike on the Appalachian Trail, it was calling to her today from a number of spots in the park, but she's just gonna have to wait awhile longer. We wouldn't want the grandkids' parents to worry....(Whew! I'm off the hook for the moment, says a relieved Eldo.) But not for long...after our one mile hike up and down Clingman's Dome today, Sparky is all fired up to do another hike in the mountains where it's COOL! How about tomorrow, sweetie?  Eldy? Eldo? Uh, now where did he go? .........

Back to the hike...It's a strenuous half mile steep climb one way to the top of the tower, and then....the amazing view! 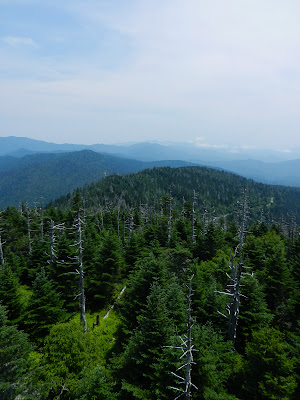 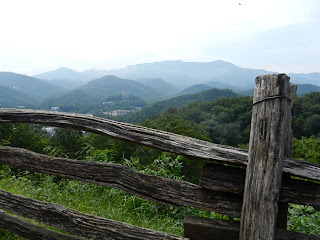 Papa about had a heart attack...Sparky has been trying and trying to get him to ride a bike, walk each day, but NO-O-O-o-o-o-o..... NOW he knows he needs to get back in shape! The kids hopped, skipped and jumped along the way to the top, with a little whining in between by Trevor. He kept wanting to turn back and head back down. Not until a gentleman passed by Trevor with his little girl riding on his shoulders and chided Trevor for not keeping up, did Trevor perk up and hoof it up the rest of the way.....We took a brief rest at the top, then headed back down, down, down, the rest of the way back.

Sounds like a celebration in order for having made it to the top and back down...off to Tutti Frutti for some frozen yogurt! Yum! And now, it's time for a nap or the pool, one or the other! Maybe a nap AT the pool, that's the ticket!  Papa and Grandma Sparky are whupped! But not these GRAND kids! 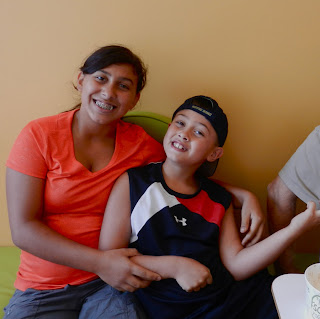