Today was a three hour drive to get to Sevierville, TN. home of Dollywood and lots of other touristy stuff. We traveled I-59 N to I-24 E to I-75 N to I-40 E. We picked up the grandkids in Sevierville, and their parents headed back home towards Indiana. We've got Trevor on board, age 8, and Cate, age 12 for maybe two weeks if Papa and Jeannie can last that long, and the kids can last that long without their mom and dad!

It didn't take long for Trevor to scope out every single cabinet to know what was in them, what kind of snacks we had and what kind of food was in the fridge! Not the right stuff, apparently, as he wants to go to the grocery store with Sparky to help her restock! It was 107 degrees today...too hot to be outside, but we briefly checked out the beautiful pools in The Dell. The Dell RV park on Apple Valley Road is part of a huge complex of housing and lots for sale called Hidden Mountain Resort, nestled in the Great Smoky Mountains. It's pricey, 55.00 a night but we thought, erroneously, that there was a lot of stuff here for kids...NOT! At the park, anyway. We will stay here three nights, then leave for a different park in Sevierville. 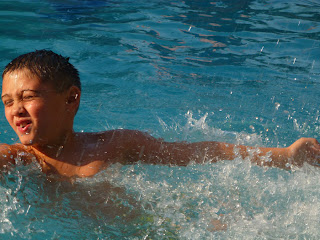 As the kids got settled in, Trevor was rarin' to go...He decided he wanted to check out the pool right away. So Grandma Sparky took him while his sister chilled out back at the rig with Papa. Trevor met some kids at the pool. He met a young girl named Belle. He was so polite. He said, "Hi, my name is Trevor." She said,"My name is Belle." He says, "Nice to meet you, Belle." ! And this coming from an 8 year old! 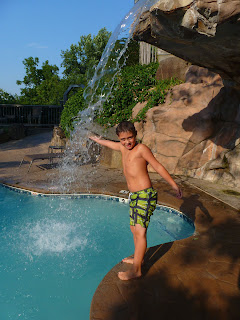 They played some fun games together at the pool, one of three pools at the RV park section. Two smaller pools are hot tubs. The landscaping is amazing here poolside! The main pool has a waterfall which was fun to get under. 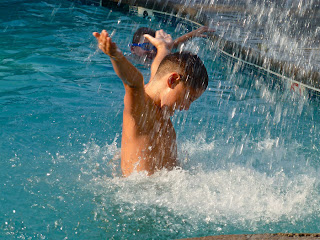 Belle and her brothers played a game where someone was "it"  sitting down on the pool side edge and the people playing the game with her would be IN the pool, waiting at the edge. Each person would choose a name for themselves based on an established category like "colors". Belle then called out color names slowly one by one.  If the person who was "it" called YOUR color, then you had to sneak away from the edge of the pool as quietly as possible and try to get to the other side before the "it" person heard you moving in the pool. If they heard you, they turned around and jumped into the pool, trying to catch you before you made it to the other end. This was a very small pool, and the kids were little, so it was fun for them. Everybody had a chance to sneak away and maybe make it before getting caught. They played "Marco Polo", too. Trevor really had a good time in the pool today, as you can tell!

More photos tomorrow...We are totally wiped out from the drive today, getting everybody organized and settled in and having made a trip to the grocery store. The traffic here is VERY congested as this is quite the tourist town...It was a big ordeal getting thru the store today and in and out of the parking lot! The lines of traffic on the main road here in Sevierville and Pigeon Forge are AWFUL! We'll see you tomorrow.....
Posted by Jeannie and Eldy at 11:48 PM