A Hitch in Our "Itch"

The last night the kids were here, I was looking around for my special effects flame coloring sticks for the campfire, opening all the bays, looking for places and things we have moved around in several different organization attempts. The last bay I looked in was the battery bay...wrong place to look, but it turned out to be a blessing that I did. As I opened the door, the heavy battery tray rolled out slowly. I went to push it in, it rolled out slowly again. HUNH? When you push the tray firmly, it is supposed to LATCH and stay securely in all the way. The darn tray just kept rolling back out.

"Uh, Eldy? C'mere....I can't get the battery tray to stay in." He came around, looked at it, couldn't get it to stay shut either. Something was wrong. Brian, Eldy's son, took a look at it, and together, they figured out that a weld had broken, the one that holds the latching mechanism. That tray was destined to keep rolling back and forth on the highway with every pitch and roll of the rig, banging against the bay door. As heavy as the tray is, holding six house batteries, the only thing holding these babies back is the bay door. We cannot be driving down the road without that tray secure! Eldy had visions of the battery tray banging against the door repeatedly and eventually knocking it open.

So the guys worked and worked to try and figure out a way to contain the battery tray until we can get somewhere to have the bracket welded again. They took wood shims and jammed several different sized pieces into the tray rollout slides with a hammer. It's gonna be a BEAR to get the tray out when it comes time to fix it, but at least we don't have to worry about the tray breaking loose out of the motorhome! But now, we can't check the battery levels, either! So that's going to have to be a repair done soon.

For some reason, today was full of little glitches and just not as smooth sailing as normal departures are. Full timers know how that goes. Sometimes you forget little things that you ALWAYS do before you leave, like put in the little front door awning before pulling out of the campground. (Ask Sparky why she picked that particular example! says E.) No, ask Eldo! :-) Or you forget to make sure your Fantastic Fans are down and the vents closed, or you pull into a gas station for fuel and it's just one problem after another. Like today....We hooked up the car, but realized shortly after leaving, that the only way to really leave Timothy Lake to get back to the main interstate heading north, was going through the little burg of Milford, with the 209 north detour. It's a really small town with construction going on, and Eldy remembered a tight turn. We decided to unhook the car and head through separately, then join back up at a Walmart parking lot just before getting on the interstate. That worked out ok, but took time. (Sparky just HAD to stop in Walmart to get a couple of things, or WE'D HAVE BEEN OUT ON THE ROAD SOONER! says a slightly aggravated E.)

We pulled into the Valero truck stop/gas station at exit 1 in Massaschusetts and we had a dickens of a time trying to get the Indian guy to understand that we wanted our big fuel bill split into two separate transactions on two different cards. He spoke very little English. At that particular truck stop, the attendants have to pump the truck fuel side. He started to fuel the tank on one side of the rig, then went over to the OTHER side of the rig to start a second fuel pump. Ah, NOPE, buddy! That's not what we want to do.... We don't have two fuel tanks and we didn't think it was a good idea to run diesel through both sides of the rig at the SAME time into ONE tank. We finally got out of there. It was a bad exit, tough to get in and out with construction going on in the area. Back on the road we went. ome of the roads were really rough today....I-84 wasn't so bad...I-495 around Boston, I-495 was BAD..We rattled so badly and things moved around so much, we are sure something is broken, somewhere...At one point, we were 54 miles out from Boston. HEY, RICH!--A shout out to my brother, Rich! He lives in Lexington, but no time to stop today...we're on a deadline to get to Bar Harbor, Maine by Tuesday evening. It's not easy going through New England towns with a 40 foot motorhome and tow behind. From I-495, on to I-95 north. We traveled through and under some cool bridges... 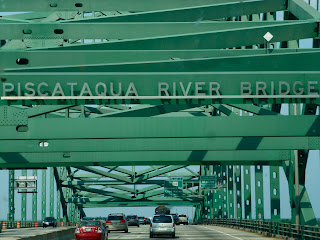 We saw some terrific scenery....just heading into New York, we went through Hartford, CT and saw some amazing insurance buildings from the highway....Aren't they the "insurance capital" of the U.S.? 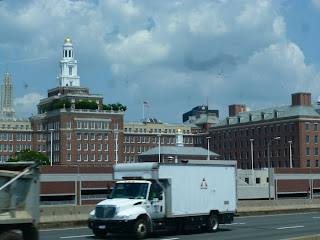 And we stopped at a terrific welcome center in Kittery, Maine so Sparky could stock up on her brochures for the state of Maine. There was a TON of information there, and Sparky came out with a bag FULL of stuff. (It's like Christmas to her, picking out all the cool brochures, maps, and things to do in the area, don'tcha know? explains E. It's a good thing we recycle wherever we can!) 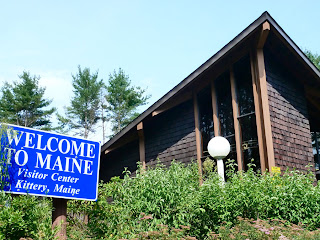 Don't be doin' no barrel pickin' now in Maine, ya hear? 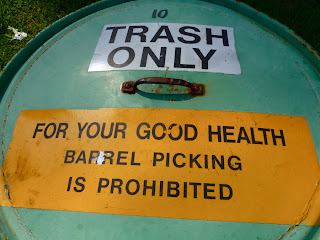 Construction, stupid drivers coming off entrance lanes to the highway crawling along into our lane, forcing us to hit the brakes, drivers zipping across lanes at toll booths to cut suddenly in front of us, narrow toll booths...geesh!  It was tough driving today--for Eldo!  We had tolls since we were on I-95 today, one at the Hamilton Fish Bridge for 10 bucks (!) , another one in Massachusetts for 3.15, one for 5.00 in New Hampshire, one for 7.00 in Maine, and THREE  at the SAME toll booth at 3.50 in Maine. We pulled off the toll road the first time through to check a campground we thought honored the Passport America rate. Their P.A. rate would have been 25.00 which is high, but under our budget for campgrounds. But they don't honor the rate during June, July, and August, and we had practically arrived there before we were able to find that out. Back on the toll road we went AGAIN. We had given up trying to find a decently priced campground along I-95, when we saw a Cabelas along the way. We missed the exit to Cabelas the first time, so back on the toll road we came trying to find a way to Cabelas. Of course we had to pay to come through the toll booth again. We missed the exit a second time, had to get off the toll road, re-enter and come through the toll booth again. Three times we paid the SAME guy because it was the widest lane we could get through. "Hi, it's us again...." The toll booth guy smiles a big smile, having collected three times, sucka!....sigh!

Sparky wanted to plead our case to the toll booth attendant about getting lost (she's good at explaining THAT, E. says) but Eldy insisted that the toll guy wouldn't cut us a break. Well, heck, Sparky is pretty good at getting refunds and getting people's sympathy, but Eldy was very frustrated and wanting to get off the road, so Sparky bit her tongue. The guy smiled sympathetically at Eldy's explanation, but we still had to pay. Phooey! 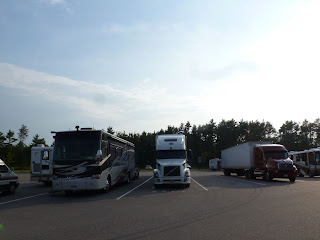 So here we are, eight hours later, about 370 miles later (a few extra we didn't need), at Cabelas, boondocking with a bunch of truckers...Very few RV's, mostly trucks. Cabelas has NO hookups, but they do have water for your tank and a dump, which is nice if you need it. You don't put your slides out, or your jacks down, that's a no-no when dry camping or "boondocking" in a public place nice enough to let you spend the night.

WE SET A RECORD, (for us) for the MOST number of states traveled in one day in our motorhome--7 states--Pennsylvania, New Jersey, New York, Connecticut, Massachusetts, New Hampshire, and Maine and for the most number of tolls, again, two too many. Arrrrrggggghhh! BUT--Sparky saw her first moose sign--"WATCH FOR MOOSE IN THE ROADWAY"...She's excited!

(Sparky, time to quit writing. You've had enough root beer to keep you up all night! warns Eldo.) There's a Portland Pie Company restaurant/pub/brewery in the same shopping complex as Cabelas (exit 42 off I-95 on the Maine Turnpike)  Pie, as in pizza pie, it was a great finish to a long and tiring day. Eldo had beer, Sparky had LOTS of root beer. Enough said. We're beat, so we're going to go to SLEEP! Nitey nite!
Posted by Jeannie and Eldy at 11:06 PM