We are going to spend at LEAST several weeks in Maine, at least that's Sparky's secret plan. (HA! Not  a secret any more, exclaims Eldo.) Right! He likes Maine, too...and we have till the middle of September before we have to be in Michigan. We're gonna moose hunt...we're gonna eat CHOWDAH! We're gonna whale watch....(Again?! sighs E.) Sparky never gets tired of whale watching. This is gonna be GREAT! Temperatures are better, the scenery is fantastic....it's just gonna be a terrific July and August, with temperatures cooler than the rest of the country, we hope!

This morning, we got up after boondocking the night at Cabelas, and all of a sudden, the carbon monoxide/propane detector went off with that piercing, piercing shrieking beep! We scurried around opening windows and checking the stove. Last time the darn thing went off, the stove knob had been bumped, allowing a tiny bit of gas to permeate the living room and setting the alarm off. We don't do the drastic, turn off the propane outside solution until we've hurried up to open windows first. If the alarm goes off, then we problem solve to see if we can find a logical explanation in the house for the alarm before shutting down the propane entirely. Now, we are a little confused. We thought it was just a propane detector monitor on the floor by the kitchen sink, it's not. It's a dual detector, carbon monoxide and propane, but we're not sure how you know which gas is setting it off. We'll have to look at the manual to see the difference. In the meantime, we opened up the windows and the alarm stayed off. Whew! 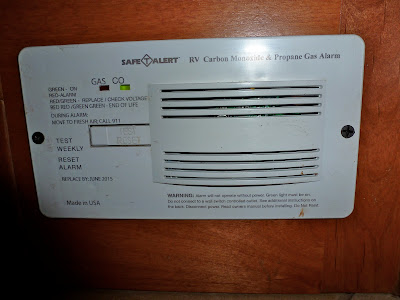 A few minutes later, it started up again...what the heck?!!!!! There's a semi right next to us. He's been running his generator all night. We started wondering if his exhaust fumes are seeping through into our rig. Sparky read a scary story a few months ago, about some people dying from carbon monoxide fumes in a motorhome from having fumes from a very close neighbor get sucked into their vent system, which had been modified somehow to be more esthetically pleasing. They had changed the design of the exhaust system and done something to the pipe. Can't remember exactly what they did. During the night, the pipe sucked in the gases from their next door neighbor, and in the morning, they were dead. Sparky didn't sleep well last night worrying about that. And she did wake up this morning with a slight headache. We had all our windows closed last night, and no fans going, but this  morning, the bathroom window was opened for awhile, which is right across from the semi which is about eight feet from us.

After the alarm went off twice, Eldy remembered that the bathroom window was open. We closed it, and the alarm never went off again. Wow....it's a great thing to have that little detector, even if it is annoying and alarming to hear it go off!  Guess we had our own little monthly unplanned monitor test this morning! Sparky got down on the floor to try and read the monitor lights and tiny print that tells what the lights mean, but couldn't see it with the slides in and not enough light. She did see that "red/red, green/green" means "end of life during alarm--move to fresh air, call 911". Not sure what red/red, green/green  means when there are only two light indicators. Homework later today! CHECK YOUR DETECTORS, DO A TEST, PLEASE!  We know the smoke/fire detector works because whenever Eldy makes popcorn, it goes off, just because of the heat output. :-)

P.S. Does anybody know how to reset a Verizon Mi-fi card with a new password and new network name? Various directions on the internet say to type in "192.168.1.1" and you should get to your admin  page for your device, but I've tried it with the http:// in front and without in the browser address line, and I get a "you are not authorized to view this page" type of message. I'm stuck! And don't really want  to spend hours on the Verizon support line trying to get the right department and a person who speaks clear English to figure it out. Any help would be much appreciated! Thank you.
Posted by Jeannie and Eldy at 11:48 PM