Can't Have it All!

Wish I could figure out what's wrong with Blogger, why it keeps giving me error messages when I try to save my blog posts. A pink bar shows up and it says something about "an error occurred while trying to save your post, try again", or "ignore warning."  I click on ignore warning and just keep trying and re-trying to post and hope it goes. So if something is out of order, or a little funky with the appearance of the blog, I apologize! Gr-r-r-r!  Cleaned out my "cache" and other stuff, and it's still happening, both with the automatic saving feature, and when I click "save" myself. We traveled to a wonderful Thousand Trails park at the very eastern border of Pennsylvania. It's called Timothy Lake and there are two sections--Timothy Lake North and Timothy Lake South. It's a winding narrow road to get to them and they are back in the boonies, back in the countryside, surrounded by the Poconos. The south park is much better suited for big rigs. The sites are very spacious and roomy, with good length to them. It's a state park feel to it, with the accompanying difficulties of having bad internet on our Verizon mi-fi card--one bar and SLO-O-O-W, hard to load anything! AT & T cell phones are three bars and occasional difficulties with reception on incoming calls. You can't have it all, unless you've got a Wilson antenna and amplifier, which we don't. BUT--we've got wildlife here. Sparky has seen lots of deer inside the campground, and found out that some of the campers are tempting the deer with soda crackers. Tch! tch! tch! That's illegal in some states, to feed wildlife. But the deer are here. This doe looks like a statue, she's so still, but she was waiting to see what I would do. 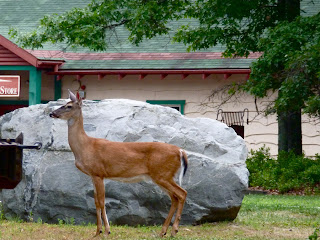 They are on the roads coming into the park and leaving the park. They are in the campground a LOT.
They are a LITTLE skittish, but not as much as more wild deer would be. They keep a watchful eye on you but don't seem too concerned. The fawn below was just nursing on the fly as mom would walk and stop. 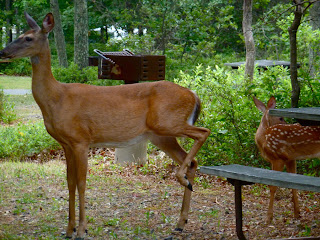 It's peaceful....the temperatures are a cooler 86 degrees....A couple of months ago, I NEVER would have said 86 was cooler...Nope! That's sort of like saying 62 is the new 50 when you are talking your age, which is what I'm going to be in about a week. Geez, old enough to collect social security...I'm going to be an official old geezer next week! (Uh, honey, I hate to say this...but.....) SHHHHHHH! Eldo! 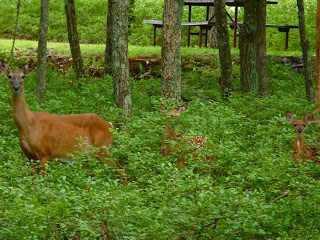 It's a very nice little waterpark. 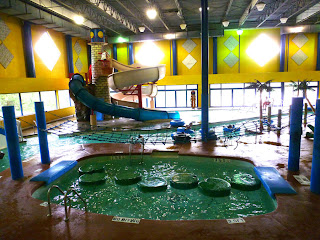 Lily pads with climbing ropes, a pirate ship, fountains everywhere, a water river that moves pretty fast, it's all fun! Both Papa and Jeannie got in and went around the "river" many times. Here's Eldo getting wetter than he wanted to! 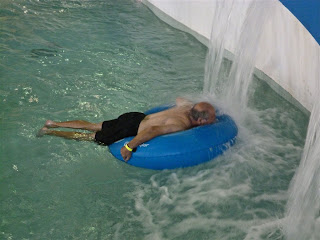 We are really enjoying Timothy Lake North and South. Instead of three days, we think we will stay a week...the grandkids are getting picked up this weekend, so only three more days until help arrives. :-) We'll see you later, tomorrow we are going to the Delaware Water Gap National Recreation Area to check it out.....Bye for now.....
Posted by Jeannie and Eldy at 11:44 PM