Sparky decided to venture out on the Island Express, the FREE shuttle buses that L.L. Bean partners up with Acadia to provide FREE transportation all around Mount Desert Island and Acadia National Park. You can get just about anywhere you want to go except up to Cadillac Mountain, you'll have to drive yourself there. She wanted to see how the buses operated, how long it would take, and if you could get to any hike you wanted by taking the bus. You can, it just takes time--LOTS of time. Today, the buses were standing room only, that is unusual for a weekday! Dogs are allowed on the buses and sometimes take up seats. Sparky couldn't tell if all three dogs on today's bus were service dogs or not. Two of them were wearing vests, and the third one wasn't. Buses come at least once an hour in many locations, if not more. They were on time, very comfortable and are environmentally beneficial, they run on propane. Sparky thought she couldn't get lost on a bus, just on the hike, so she had a 50-50% chance of getting back home in time for dinner. (She left at 9:40 AM, folks....)

It took an hour just to get from the Narrows Too campground to the Hulls Cove visitor center, normally about a 25 minute drive by car. At that point, Sparky transferred to another bus that was doing the Park Loop  Rd. route. Sparky wasn't sure which hike she was going to do by herself. She decided to do a little people watching on the bus, and when a whole bunch of people got off the bus with their hiking poles, she got off with them--at Sand Beach. She knew there was a good hike there because she had the trail map with her. Such a scientific methodical mind at work, don't you know! 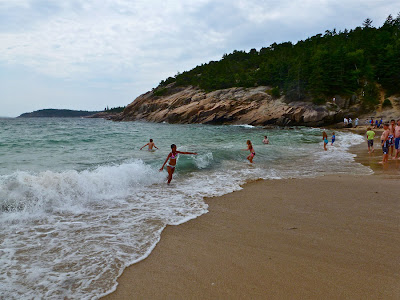 Sand Beach is not the biggest beach, but it's one of the coolest ones, literally! Water is an arctic, refreshing 55 degrees (!) usually. Cliffs surround the sides of the beach. Not very many people swimming in the cold water, but it was also a cooler beach today with a cool front coming in and ocean winds swirling around the cove today. It was probably 68 degrees. A nice 1.5 mile loop hike starts on the eastern side of the beach, and is called the Great Head Trail. It's considered a "moderate" hike in the books--"some steep grades, some level stretches." It's a relatively level evergreen forest hike AFTER you scramble over boulders and seaside cliffs, check out the view at the top, then back down the boulders again to get back to the beach. 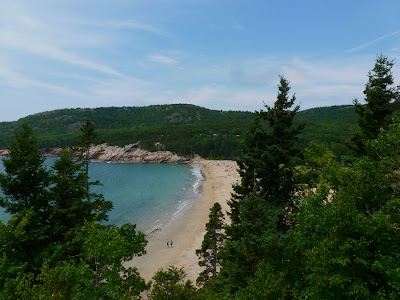 If you have aging bad knees or hips, it's gonna be a little bit of a challenge. This is part of the trail! 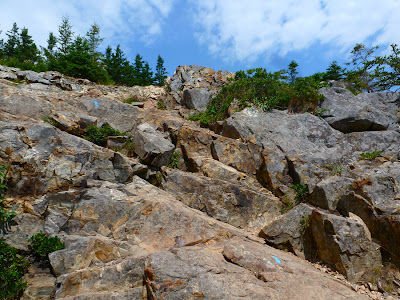 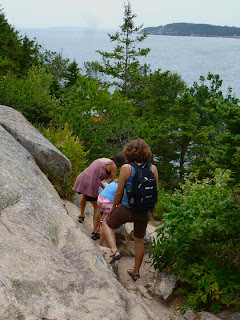 BUT--if four year olds can do it, which Sparky saw a bunch of little kids scrambling over the boulders like little monkeys with their parents, then anybody can do it if you take your time. Hiking sticks help with balance and coordination and planting a position coming down a slippery boulder.

There were three kids on this hike with their moms, and all the kids looked to be under the age of eight. Sparky soldiered onward.....

You just gotta watch where you plant your feet! Easy to turn an ankle on these rocks and boulders and crevices, that's for sure! 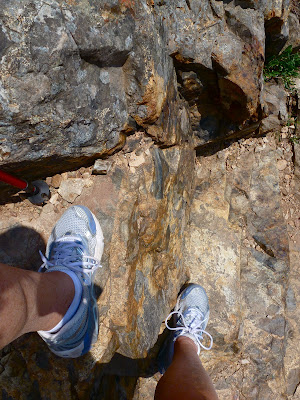 Sparky did not want to be foolish (Nah, not Sparky!) and pick a hike that was crazy strenuous, so she picked this hike today because 1) there were lots of people on it in case she ran into trouble, and 2) it was listed in the easy hike book. It was great! The scenery was terrific! And the people were really nice and friendly, going up and going down. It appears to be a popular hike, but then, in the summer season, all the trails are busy.

When Sparky got down to the bottom, she rewarded her tootsies with a cool off in the cold ocean waters. Boy, that felt good! AND--Sparky did NOT get lost on the bus, or on the trail. Both were well marked and she CAN read a bus schedule. Let's hear it for Sparky!  Woo-hoo! (Don't give her too much encouragement, folks, or she's going to be gallivanting all over crazy trails on her own. She just needed a little individual adventure on her own today. Hopefully, that will take care of that fierce independent streak for awhile that she has.) Eldo is crossing his fingers..... 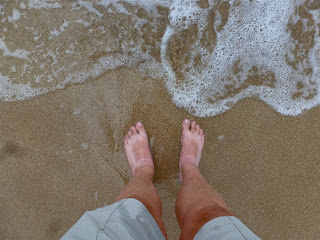 If you want a crazy, get-your-adrenaline-going, scare-the- pants-off-you strenuous hike, then the following hikes fit the bill:

Acadia Mountain Trail, Beehive Trail (iron rungs on edges of exposed cliffs, very steep), Cadillac   South Ridge Trail, Perpendicular Trail (Mansell Mountain), the Precipice Trail (more iron rungs and ladders on steep cliffs with exposed cliff ledges), and Sargent Mountain....  While on the bus, Sparky saw the people doing the Beehive Trail, and they looked like they were clinging to the side of the mountain for dear life, with nothing but sheer cliffs above and below them, like Spiderman scaling a vertical cliff.  SCARY! But interesting..Hm-m-m-m....(Uh-oh, don't you be thinking about going on that hike by yourself or even with me! warns E.) I don't THINK I am, but you never know, it might be the challenge of a lifetime kind of thing. (Sigh!) 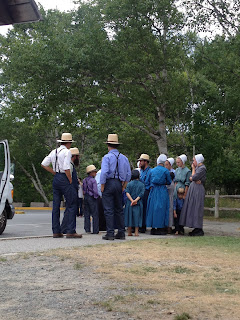 As Sparky got ready to catch the bus to come home, people watching ratcheted up a notch. A large group of Amish stepped off a van at the visitor center. They were quite a curiosity to many folks who probably don't live around them. The children were barefooted, Sparky wondered if they were going hiking or just down to the beach to check it out, or maybe just getting information at the visitor center. She surreptitiously snapped a quick photo on her phone. (Tch, tch! Sparky knows better, you are not supposed to photograph the Amish!) Well, I know you are not supposed to ASK them to pose, but thought this might be ok since it's from a distance.

Last shot of the day was a disgruntled student coming off a field trip bus from the local schools. Maybe not disgruntled? Just his mind was elsewhere. Thought he was the perfect picture of a kid who'd rather be someplace else at the moment, although it's difficult to imagine a more beautiful place than Acadia. It made Sparky remember all those field trips where she had to keep track of how many students did we have? "Who needs to go to the bathroom? Stand over here." "You forgot your lunch?" She always packed extra sandwiches or snacks for that kid whose parent either didn't fix him one, or the kid left their lunch in their locker. That kind of stuff...... 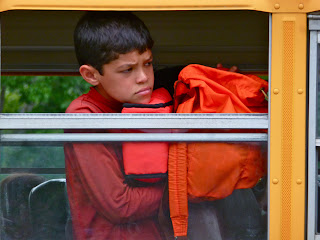 Bye for now, see you on Cadillac Mountain, or on a hike, or who knows where Eldo will be next in Acadia? He might be at the Atlantic Brewery for a free tasting and tour, you never know!
Posted by Jeannie and Eldy at 11:31 PM