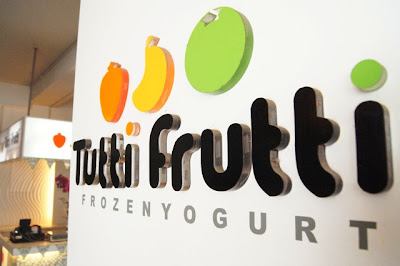 Eldo and Sparky have discovered a great frozen yogurt place called Tutti Frutti. They have 580 stores world wide. When we are hankerin' for ice cream, Tutti Frutti now runs a close second to hitting a D.Q. --that's Dairy Queen JUST in case somebody isn't familiar with D.Q. Some people DQ say is not true ice cream with all the corn syrup, chemicals and stabilizers added. But hey--any excuse for something that is supposed to be good for you and sounds like there are more health benefits than ice cream---well, maybe Sparky can get Eldo to switch! (We'll see...says he.)

Tutti Frutti adds probiotics to its yogurt..Probiotics are supposed to be beneficial to your gut...Dannon yogurt has probiotics in its line of Activa yogurt, and they make a healthy profit on it. Probiotics might help prevent constipation, diarrhea and bloating caused by some intestinal bacteria, according to Dannon's information AND Tutti Frutti's. If you read the claims on the Tutti Frutti walls, you'd think you were eating a miracle food!  "IMPROVE IMMUNE FUNCTION, PREVENT INFECTIONS, REDUCE INFLAMMATION(!)" But heads up, people are suing Dannon over these similar health claims, so the jury is still out on this...heh, heh, heh.....pun intended.

And now, Tutti Frutti has SOYBEAN frozen yogurt! Ewwww....Not sure if we'd like that. There was a soy based peanut butter frozen yogurt, but we didn't try that one. Sparky loves the strawberry banana flavor the best. She made a beeline for that one. Then the raspberry....

Well, their heart is in the right place. They want you to eat healthy. And they have a "green" initiative/project with the Nutrition and Education Institute (NEI) with farmers in Afghanistan to help them make a living by providing them with soybean seeds and education to help put an end to poverty. Tutti Frutti contributes 10% of all its proceeds from sales of soy yogurt to help fight hunger in Afghanistan. Gotta love a company with heart, except Sparky wishes they were fighting to end hunger in the U.S. Lots of seniors and kids going hungry every day here in the good ole U.S. of A.

So load up on the yogurt, but not all the sugary candy toppings at the goodie bar at the end of the line just before you get your yogurt weighed and paid for at .42 an ounce. Just how healthy is this stuff?  25-30 calories in ONE ounce of yogurt for most of the flavors, and 5-6 grams of sugar per ounce.  Uh, that doesn't sound too healthy at all if you load up your bowl with about 12 ounces of frozen yogurt which is about what each of us ate today. But if you put some fresh fruit on it, that makes it healthy, right? Just not if you are watching carbs and sugars. Don't you just love this rationalization for eating something that is turning out not to be a whole lot better for you than D.Q. ice cream? 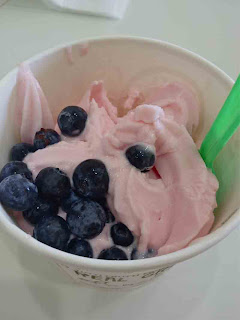 Sparky dumped on some fresh delicious blueberries on hers. They have great flavors like royal red velvet, mango, cheesecake, chocolate of course, and lots more flavors that they rotate in and out---Sparky had strawberry banana, raspberry, and "strawberry fields" in her cup, and Eldo had cotton candy and mango in his. They use fresh fruit cut up daily at Tutti Frutti, no frozen fruit. 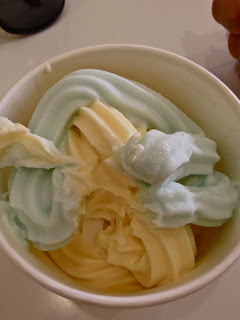 What can I say? It was delicious! And maybe just a tad bit better for you than ice cream. Sparky is too lazy to do a item by item nutritional analysis of D.Q vs. Tutti Frutti. Bet there's an app for that! :-) We just eat what we like for now until the doctor commands us otherwise...and as my mom used to say, "Anything in moderation."  Now let's go eat some frozen yogurt....See ya later......