Today we went to the Hindu Temple in the Woodlands so Kerry and Bigyan's new baby could receive a blessing at the temple. We have so little knowledge of the Hindu religion, it's embarrassing, other than the little bit we learned in school. The baby's dad is from Nepal, India and family customs are that the baby is to receive a blessing ceremony within a certain number of days old. Kerry told me about another custom where the baby is to sleep one night with a knife and a book under his mattress, so that the knife will bring him strength, and the book will make him smart.

We had never been inside a temple before. First, we took off our shoes before entering. There were racks and racks for people's shoes outside the temple entrance. 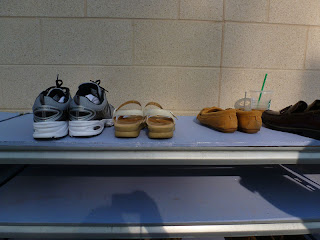 It was interesting to see the different deities inside. 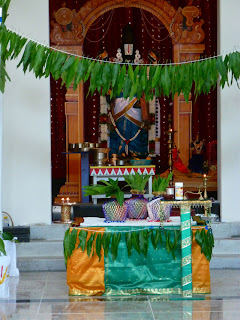 Barron was very quiet while inside the temple. He was sleeping! Here are the proud parents. 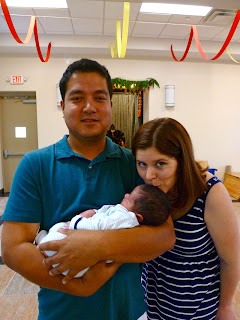 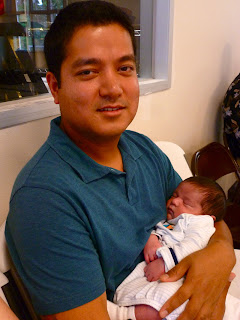 We were given a little bit of an explanation by an elderly gentleman there, but he was very difficult to understand. There was some kind of ceremony already taking place when we arrived, and it appeared that they were celebrating the first year anniversary of the temple. It was a very casual atmosphere. We were surprised that people were carrying on conversations and walking around the temple while the priest was conducting the celebration or blessings, at least that's what we think he was doing. We were used to being quiet when in the presence of a religious ceremony, but this was very informal today and not many people present, so perhaps this was something that didn't require a formal, quiet setting. People were coming and going at different times while all this was going on. Seeing all the things that the priest was doing made Sparky curious about the meanings of his actions and the symbolism behind it. 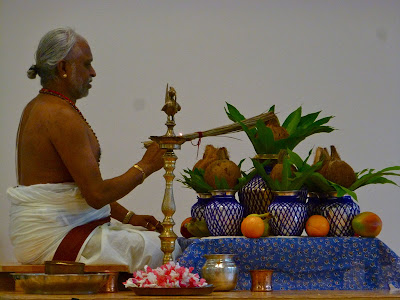 We waited for awhile and it appeared that we were not going to be able to see the baby be blessed, so Eldy and I headed for home....Kerry and Bigyan waited at the temple to feed Barron before heading home, and shortly after that, we got the message that they managed to have the priest see Barron after all and get the blessing in. We missed it! Phooey!

Back home today, we starting planning for where we are going next when we leave June 25th. Eldy's son called, and the kids are going crazy at home, bored out of their minds, so he suggested a trip to see Papa and Jeannie....as in a trip in the motorhome somewhere for a week or two. Looks like we will be planning a trip with two grandkids on board in the near future, a trip with Cate, 12, and Trevor, 8. Eldy is researching where to go, and Sparky is looking at activities and amenities where we might be. It will be a BUSY two weeks with grandchildren living with us! Gotta get prepared......Bye for now......
Posted by Jeannie and Eldy at 11:48 PM

Email ThisBlogThis!Share to TwitterShare to FacebookShare to Pinterest
Labels: Bigyan and Barron, Hindu ceremony, Hindu Temple in The Woodlands