Opening Day at Trader Joe's in the Woodlands

Were we crazy to want to go to the opening of the new Trader Joe's in the Woodlands today? Yep! I would say crazy as a fox, because of the values we saw there today but definitely NOT in this case! But we were part of the madness anyway. Parking lots completely full all over the place outside, blocks and blocks from the store itself. Inside, the store was jammed, the lines to check out were an hour long and snaked from the front door to the back of the store and around the perimeter of the store. 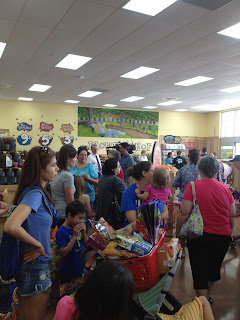 Trader Joe's is a store that is owned by Aldi's, the discount grocer. Trader Joe's is a grocery store that markets itself to an upscale, educated community with an emphasis on value.  It seems to be equal parts natural foods, specialty foods, a neighborhood store, and a discount warehouse. It claims that much of the food that is sold is natural and made without artificial ingredients.

The workers wear Hawaiian shirts, and seem young and enthusiastic about working there. Of course, they just started today. Being that it was opening day, and the store was jammed, everybody who worked there was frantically trying to stock shelves, pass out free food samples and answer questions. They had some WONDERFUL food to try today...sweet/sour chicken with rice, cheese from New Zealand from grass fed cows....

Oh, yeah...FREE food! (That was the main reason Sparky wanted to go, dontcha know! says E.) Trader Joe's claims they are willing to open any of their packaged items if you want to try before you buy...We didn't test that claim...The store was too packed! They even had a young man playing steel drums in keeping with the tropical feel of the store opening today. He was very good. Sparky LOVES steel drums...Eldo had to hustle her out of Trader Joe's before she starting hanging out to hear the steel drums and making impulsive purchases. But she'll be back! 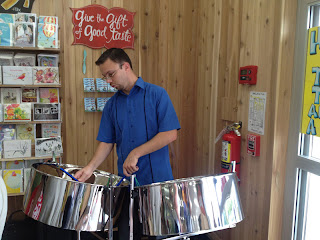 We'll definitely go back after about a week, when things have calmed down...They had some really interesting products there. Sparky likes the idea that a lot of their stuff is organic and free of artificial ingredients, like their bread. They have a big sign that says you'll need to refrigerate it because it doesn't have preservatives in it. Everything on the shelves is visually appealing and many products have unusual names. Awesome! 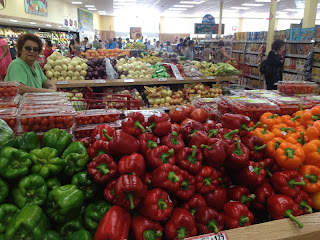 Trader Joe's puts out a flyer called the Fearless Flyer. It's part comic book, part newsletter, sort of a cross between Consumer Reports and Mad Magazine, the company says. Here's a page from the June Fearless Flyer.... They've got kind of a folksy sense of humor throughout the store and in their little newspaper, it's an enjoyable quick read...We'll definitely go back this week to try some products....For now, it's time to go home and do some research about where we are heading to next..maybe with some more grandkids on board! (Eldy's grandkids!) Sparky owes him big time after spending four weeks in hot, hot Texas so she could spend time with her daughter and the new baby. (Didn't she say "share and share alike" not that long ago, folks? asks E.) Yup, I sure did.......
Posted by Jeannie and Eldy at 11:13 PM