Had a nice stay at the Coushatta Casino's Red Shoes RV Park last night. We got an early start this morning around 8:30 AM. We took I-10 east, passing through the Atchafalaya Basin which was looking absolutely beautiful today. The picture on a hazy day just doesn't do it justice! But it's a very beautiful area. 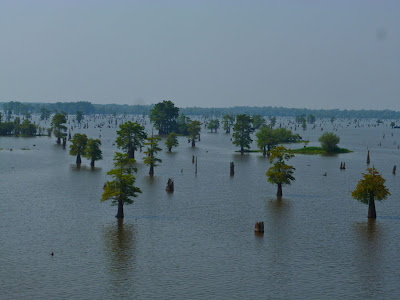 On to I-12 east, and then heading to I-59 north. Unfortnately, we had a little confusion about the exit for I-59 north...(WE? Don't you mean YOU?! exclaims E.) That's why he didn't get too mad when we missed it. Well, Sparky is not the best navigator, you know, and Eldo knows that, too. Why, Sparky spent more than an hour trying to find a Taco Cabana on her last trip out and about Spring, TX on her last day in the area, and never did figure out how to get to it, even with the phone's G.P.S.! You should have seen MapQuest draw and redraw those little blue lines and put red and green and blue pin dots in different spots as Sparky continued to get lost, turned around, and headed back down some of the same roads she had previously already traveled trying to get to a Taco Cabana to have some street tacos. Phooey! The map grid looked like a maze and finally, like somebody just scribbled some blue lines on the map grid. She should have taken a photo of the map grid! Sparky gave up after an hour and fifteen minutes of driving around in circles and up and down the I-45 Frontage roads. To her defense, you can't just get off the highway and turn around all that easily with I-45 and the feeders running along both sides. Sometimes you gotta shoot past your destination, do a U-EE and come back at it from the other side of the highway. 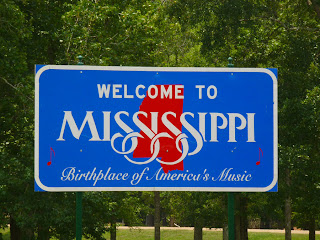 Where was I? Oh, yeah---we missed our I-59 turnoff. No problem. We'll just whip into the Mississippi Welcome Center,  off I-10, which was absolutely beautiful and HUGE by the way.......It was like walking into an antebellum home. 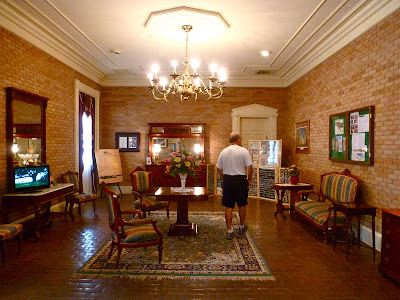 While there, Sparky will just whip out the traditional map and get us an alternate route north tying back into I-59. (No problem???? Her map reading skills are a TINY bit better than her physical orientation in space skills, but not much! laughs E.) This is so true, Sparky is laughing, too. It's a family joke about how lost she gets, heck, her whole family is wired like that, it's called the family curse! Now, doesn't highway 607 North look like a viable route to you guys? 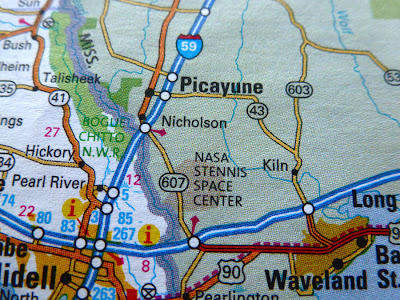 Sparky thought so, too. Eldo thinks to say, "Did you check the trucker's atlas (a.k.a. Motor Carriers' Road Atlas) to see if that's a good route?" Uh, no....but I will....Hm-m-m-m, that's odd..."Uh, honey, I can't find it on the map." The darn thing is so hard to read with all the orange thick lines running through it, Sparky doesn't like to use it. You can see why, right? The red dots on the truckers' atlas are restrictions on height, length or something else as explained in the atlas. 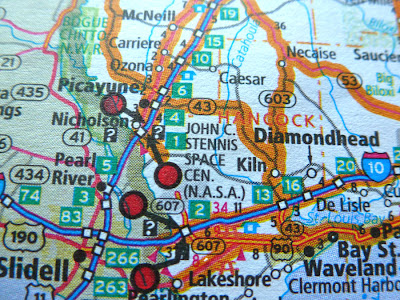 Highway 607 looks like a skinny orange line, but there's a problem. It leads straight into the Stennis Space Center, and for a rig with a tow, that didn't look like a good way to go. (Ask Sparky how she knows)....It's apparently NOT a trucker route!?  Or hey, maybe it's a truck delivery route for the space center. AHA! That's it! Whatever! So, we did a giant U-EE in front of the entrance gates to the Stennis Space Center.
Hi, guys!
Bye, guys!
Eldo is very good at those turn arounds...We did a giant U-EE one time in front of the Boston toll road gates with a cop near by. THAT was interesting! The cop just shook his head.....whew!
We got back on the road after a quick sandwich lunch and started looking for a Passport America Park or a cheap stay on the way to Meridian MS, our stop for today. Eldy wasn't quite sure whether this would be a marathon driving day, around 400 miles, or something shorter. It ended up being a long day's drive, over 400 miles. We found a park in Meridian called Benchmark Coach and RV Park. We'll report on that park tomorrow......Time to get off the road and relax! Sparky is whupped--er, uh, ELDO is whupped!