A New Driving App for RVers?

We're testing out a couple of new driving/trip apps we discovered...One is called "Waze" and the other is called "RV Trip Wizard". We'll report on Trip Wizard another day, we don't have enough experience with it at the moment. Waze is a neat little program used while driving around town...probably more useful for big city driving. Since we are in the Houston area, and doing a LOT of driving back and forth on the frontage (or what locals call the "feeder" roads) and I-45 and highway 249, Eldo read an article  about this little app that lets you know where the traffic jams are, what the local driving speeds are, where the police are, where the traffic cameras are, what road hazards lie ahead, so we thought we'd try it. It's FREE!

The Waze program (available for iphone, Android and Blackberry) is different from other driving and travel apps because it's a driver community app...groups of people are reporting in "now" time where accidents are, where there's a jam up in traffic, and the GPS based system reports actual speeds of traffic on the roadways where you are and around you. It depends on the number of drivers reporting in and around you as to how detailed it gets.

Here is a link that shows you how it works:


It's sort of gimmicky....you get points for reporting traffic incidents, you get to change your "mood" little icon every 100 miles or at a certain number of points.....little bonus "candies" pop up every so often giving you additional points for just using the program, and there are lots of extra little features that seem to be designed for people with short attention spans, so they will keep using the program. (People like Sparky! says E.) You can "ping" people nearby, your fellow "Wazers" where your little avatar (little car symbol of you) says "hi!" just to make the stress inducing traffic congestion a little easier to bear, you get to make all kinds of reports...."car on shoulder"...."police visible".....where traffic cameras are located...where traffic is "moderate", "heavy", or at a complete "standstill".  The program refuses to let you do anything other than a simple click while you are driving. If you were to attempt a text in an explanation field why you are moving slowly, the program shuts down temporarily and says you can't text and drive!

Here are a couple of screens in the program and what they are showing: The red bars are traffic moving rather slowly...You can see that on I-45 South, since it's gray, traffic is moving at normal speed. Any time the road is red in sections, that means traffic is bogged down. Traffic on I-45 North is moving extremely slowly and at about 9 miles an hour. Down at the bottom of my iphone, there is a major traffic slowdown--traffic at a standstill on the feeder road alongside I-45 by the bunches of cars shown in the little icon on the screen. There are not any side roads nearby at the moment, so the map is not showing as much detail as it normally does. 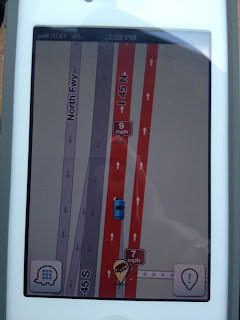 Here are the types of reports you can access to file your own report, which can be done in a couple of seconds...My only concern is, who is doing the reporting? If it's the driver, then we're going to have a lot of distracted drivers on the road and this program is a hazard in itself. If it's a passenger, or the vehicle is carrying a bunch of car poolers, then I see no problem reporting while driving. What we've been doing is just opening up the program and setting the phone on the middle console. Once in awhile, Sparky checks it to see if there are any slowdowns coming up, or any major accidents. The chit-chat feature is you doing an audio recording of what's going on in front of you as you sit in traffic, at least that's what we are hoping how the reports are being done. 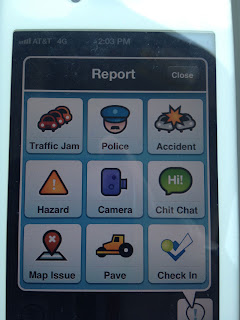 We don't have a CB in this rig, so this little program has been helpful so far in knowing at least WHY traffic is stopped and what distance away the traffic stoppage is from you. According to the information in the program, it will also show you alternative routes if traffic up ahead is crawling, so you can avoid such congestion on your daily commute and take an alternative route. We're not sure if we would use this all the time, but it's a diversion for Sparky to look at while in the passenger seat and we're just crawling along. She's a "baby Wazer" right now and working on getting more points!  She likes it! (Doesn't take much to amuse Sparky, smiles E.)  Check it out and see what you think......
Posted by Jeannie and Eldy at 11:47 PM