OK, it's official. It's a palmetto bug/cockroach also known as "American cockroach"  UGH! and we need some spray called "BUGS BE GONE"!  Sparky likes the name "palmetto bug" MUCH better!...When we pulled into Rayford Crossing, Sparky was perturbed to see TWO palmetto bugs crawling around on the cement pad just as we parked. Phone call to the office IMMEDIATELY.

"Hi, uh, we just checked in, and noticed these large bugs crawling around on the cement. Do you have palmetto bugs here?" 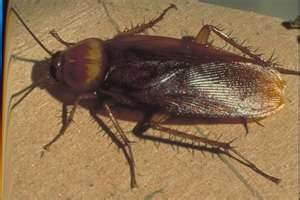 "It's not an ant problem...just wondering about the bugs, we've had a couple on board the last couple of weeks and saw them crawling around here and were wondering if there were a lot of them here. You don't know for sure?..Well, OK, thanks...." And that was the end of that...

The bug knew he was doomed. Sparky was NOT going to miss a fourth time. SWAT! SPLAT! GOT 'EM!  Whew! Sparky does NOT care to have BIG, TWO INCH bugs crawling around the house.....(Just for the record, I don't either, says E., and I don't shriek.)  :-) 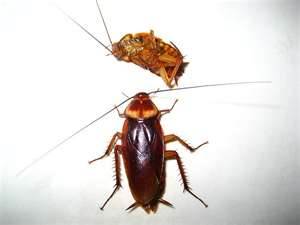 Sparky thinks we REALLY need to clean out the bays and see if anybody ELSE is living in our coach. But it's too hot to do a thorough cleaning of the bays and it's gonna be HOT HOT HOT the rest of the month. (Gee, guess we will just have to wait to clean out the bays, sweetie..) Which means ELDO has got the next flyswatter round of duty. Sparky is gonna shriek an alarm the next time so Eldo can get one! Share and share alike, Sparky always says and she also asks, how come she is always the one finding and killing these bugs?....Too bad the heat doesn't fry these critters. Sparky hates to use chemicals....Dryer sheets, anyone?
Posted by Jeannie and Eldy at 11:41 PM