If you've been following our blog, you know that Sparky has a life long fear of going to the dentist, which stems from her traumatic second grade ice skating experience in 1957. She lost BOTH her permanent front teeth in the ice at the local elementary school skating rink trying to skate backwards before knowing how to skate forwards and left them there forever in the not-so-forever ice. A series of traumatic repeated visits to a harsh dentist in the 50's left her permanently scarred forever when it comes to dental visits. Mind you, this is a gal who used to have nightmares for years of her teeth crumbling and spitting out little bitty pieces of teeth when trying to talk. The dreams were so real she used to wake up feeling her front teeth with her tongue to see if the crowns were still there.

Not to mention that just a matter of a few months ago, Sparky's left front porcelain crown fell off, exposing her REAL stub of a tooth which looks like a little vampire tooth and she had to visit a God forbid, STRANGE dentist in a unfamiliar city to get it fixed. That worked out ok, but it was weeks before Sparky could relax and not fear that the SECOND cap was going to loosen and fall out in a public place and the experience repeat itself.

Despite having an abnormal fear of going to the dentist for the aforementioned reasons, Sparky is determined to take good care of what teeth she has left. Unfortunately, she has inherited her dad's bad teeth with heavy plaque, and has to be vigilant about taking care of gums, flossing every single day and getting regular cleanings. That is a little problematic going out full timing on the road. Dental mishaps are going to happen, you are going to be in a strange city perhaps and what are you going to do? So far,  Sparky has had her teeth cleaned in places where she has a family member living, or gotten recommendations from local park workers who live in the area. We have not yet encountered an area with a dental school where you can get cheap cleanings, but Sparky is NOT going to let a newbie work on her teeth! And we are not ready to go to Mexico like some folks do. So we try to get back to Indiana at least once a year, so Sparky can heave a big sigh of relief and go to her dentist in her hometown that she trusts.

Lately, different dentists in at least two different locations have talked about the possible need for periodontal deep cleaning, which just strikes absolute fear in a gal who has no qualms about getting two feet in front of an awake alligator to take a photo. Go figure, but it is what is is. Sparky is a WUSS when it comes to going to the dentist. She needs, what do they call it--sedative dentistry? But, it's too expensive so for now, it's grit her teeth and bear it! Except not while they are being cleaned, haha. So Sparky is not only worried about going to a new dentist in general, but she's worried about the periodontal stuff, too. 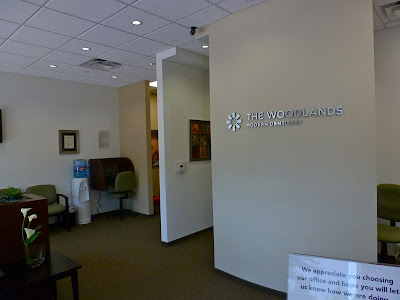 Off to the dentist today...found NOT by local referrals, of which I checked out, and ended up with two different quotes of over 300 dollars each, but with a internet special of 49.00 for cleaning and X-rays....That will work on a strict retiree's budget! Off to the Woodlands Modern Dentistry in The Woodlands, near the Woodlands Mall. My appointment was at 10:00 AM. They showed me in promptly thanks to my pre-registering online. At 11:00 AM, I had been given x-rays which were included in the special price. They seemed to have the very latest in technological equipment and of course use digital x-rays with instant viewing on a computer monitor for you to see. They also took digital mouth photos of individual teeth and fillings. That took awhile, 'cuz Sparky has so many!  I said that was a first. The assistant said that the insurance companies tend to accept diagnoses much better with digital photos. This is Sparky's panoramic head X-ray, scary enough to make into a Halloween mask! Boy, do I have the fillings! Eldy, be sure to get the gold out of my mouth if I croak! 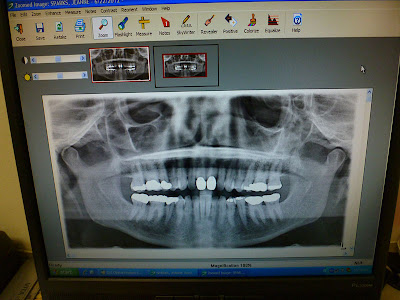 I was offered a discount dental plan that was an alternative to dental insurance, and then had periodontal charting done by the dentist, Dr. Arnold, (fastest anybody has ever done THAT) and was still waiting for the hygienist to come in. What was interesting about the periodontal charting was, I have NEVER had such low numbers (good for dental gum health) in any previous visit to any previous dentist in the last ten years. She went so fast, whipping out the numbers to an assistant, I don't know how she was reading the probe that was going in. I swear she was throwing out numbers about every other stick. After she went out, I waited for awhile again.....

The hygienist apparently was not available so again, the dentist Dr. Arnold, came in and did the cleaning for me. She was done cleaning and polishing my teeth in less than 15 minutes. That's the fastest anybody has ever cleaned my teeth, and that was not a good thing. I knew that my teeth are always heavily coated with plaque and tartar despite my best daily efforts and a thorough job on my teeth takes at least a half hour to an hour in any place I have ever been, and that's been a LOT in my 62 years. I was very disappointed in that, despite being glad at getting out of the chair in record time. I really did not feel that I received quality care today as far as a cleaning goes and I'm going to have to go back to my dentist back in Indiana sooner rather than later to get a better job done. Maybe had the hygienist done the cleaning, it might have been a different story, as dentists don't normally do cleanings. BUT--I guess you could say that you get what you pay for, right? Phooey...I'm not sure I'd ever go back to this place. If they are sloppy about their cleaning, what does that say for more extensive dental work?

Email ThisBlogThis!Share to TwitterShare to FacebookShare to Pinterest
Labels: finding a dentist while full time RVing