Four weeks seems like a long time, but it sure went quickly, helping Kerry get ready for the baby, finally seeing the baby come, and helping Kerry get settled in as a new mom. I'm really glad I could be here for her. Eldy was a saint. Most of the time, he stayed home at the rig while I ran errands, dealt with new mom crises, and he just tried to be as supportive as he could by staying out of the way, which worked for Sparky, because she was so worried about everyone and everything else, that he knew it was best to support from afar.....When Sparky gets stressed, it's best to let her be a bit, and then she comes around for hugs and kisses, reassurance, and a dose of patience...  :-) Which Eldy has a lot of and Sparky needs to borrow some....

We managed to do and see some really neat things...We've already got a list of things we'd like to do for the next time out to Texas....when that will be, we don't know, but it WON'T BE JUNE, JULY, OR AUGUST, hopefully!

Things we wished we had had time for to explore but will have to wait till next time....

1. The museum district, downtown Houston...LOTS of great museums--19 of them to be exact, with all kinds of culture within short distances of each other. We especially wanted to see the Houston Museum of Natural Science and Sparky wanted to see the Children's Museum of Houston, rated the #1 children's museum in the United States by Parents Magazine.
2. The Beer Can House...as seen on roadsideamerica.com Some guy has his house sided with over 50,000 (?) beer cans of which every one he drank over the years.
3. Waugh Drive Bridge--Sparky tried to get Eldy to go visit the bridge with her at sunset, to see 250,000 bats fly out, but he wasn't interested. (Now really, who wants to go see that? E. asks) There are even Waugh Bridge Bat Colony Pontoon boat tours!
4. Miller Outdoor Theater in Hermann Park--FREE entertainment!
5. The downtown Aquarium looked pretty cool.....
6. Williams Water Wall--a 64 foot Water Wall designed by architects Philip Johnson and John Burgee.
7. Buffalo Bayou Kayak tour--paddle through the heart of Houston!
8. Fifth Ward Jam--a contemporary art sculpture in Houston's Fifth Ward neighborhood. A rundown bungalow has been transformed into an architectural marvel that is both a performance place and a neighborhood park.
9. The Orange Show...It's a folk art monument made of concrete, brick, steel and other stuff, celebrating the guy's vision who made it, the late Jeff McKissack, a former Houston postal worker who spent 20 years building it. It's a testament to the builder's favorite fruit, the orange, eating healthy, longevity, and hard work.

And that's the current list...There's tons more to be added, but that's enough for now!
For other interesting things to do and see in the Houston area, you can check our blog out back in January 2011, when we spent some time at the Nasa Space Center, Kemah Boardwalk and Galveston Island, more great places to visit.

And last, but not least, one last little peek at the cutest little grandson a grandma could ever ask for.."Just gimme two more minutes of rest, Grandma, before you start kissing my cheekies again!" 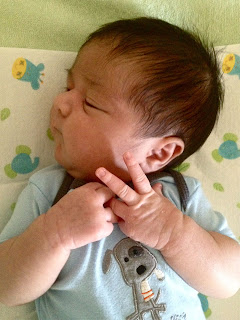 And I might get in a little trouble, but had to show my favorite photos of him over the last two weeks! 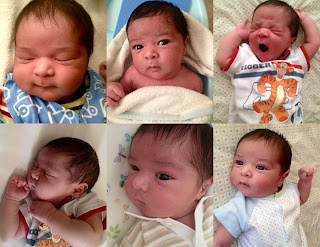 And now, it's time to say goodbye to Houston, my grandson and his mommy and daddy...We'll get to see them in December, in Florida, so Grandma Sparky is going to be able to hang in there and not have too long before she sees them again. Bye for now.......