Can You Say World's Cutest Baby?

Well, maybe an exaggeration....But Grandmas get to do that, right?
The kids seem to be settling into a routine with the baby, still no sleep, but he's becoming more regular with feeding and sleeping...He's VERY mellow, at least so far. No colic, no cranky spells..Maybe he's under a little spell? How did they get so lucky with a firstborn?  The dog is doing wonderfully with him, and getting used to having him around. They did a great job getting Domino, their beautiful Alaskan husky, ready for the baby..bringing the baby's blanket and sleeper home ahead of time for the dog to smell, limiting the time around the baby at first...Domino gets upset when the baby cries, but then she settles down quickly.

The days are spent putting new baby items together, like the baby bouncer, another gadget that has toys above on a bar, music, rhythm and sounds for exploration. The U.S. ought to be raising a nation of little geniuses with all the new fangled toys and baby items that are now out on the market to stimulate the baby's intellectual development like "Little Mozart" CD's, music CD's that are supposed to enhance the brain development of the baby, and then you have the bright colors and sound stimulation on just about everything that babies use in their first few months of development. It's mind boggling! The technology that has been devoted to disposable diapers and how they've changed is really something, too. 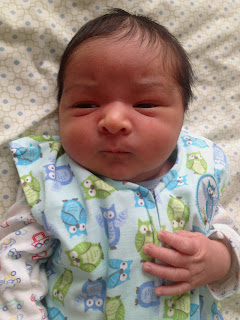 Sparky is fascinated with how quickly his expressions change, and he is smiling a lot! Everybody says, "Oh, that's just gas." At least that's what's they said when my kids were little. But I don't hear any tooting going on! He smiles when we laugh at him.

OK, Sparky is really going off the deep end of LaLa Babyland for awhile....Eldo just might have to take over the blog!  Naw, not really...Sparky promises not to get too far out on all things baby......Until later....
Posted by Jeannie and Eldy at 11:28 PM