So hearing that there was a reasonably priced tour of 7.00 a person, plus a free glass, plus four "token chips" that entitled you to four free glasses of beer, was enough to get Eldy to drive Sparky to the Saint Arnold Brewing Company today in Houston, so he could try the beer, and Sparky could blog about our experience.

The brewery is located at 2000 Lyons St., in Houston, on the north side of town. It was easy to get to, but a little confusing about where to park. The parking lots were not clearly labeled as to where you should park, and we hadn't even started drinking yet! The real facts are--Sparky doesn't drink beer, no matter HOW good it tastes, but Eldy has the discriminating palate when it comes to beers. He loves a good craft brewery and this one seemed to be excellent. The brewery taps open at 3:00 PM, and tours start at 3:30 and the brewery shuts down to the public at 4:30 PM. It is almost impossible to get in on the weekend tour, the brewery is so popular.
The brewery was started eighteen years ago by a man named Brock Wagner, and began as a home brewing operation while he was still in college. He employs 40 people at the present time, which is pretty darn good for only having been in business for 18 years. Brock was our tour guide today. He was funny and entertaining for the half hour tour. He admonished us several times, "Don't touch anything or we will kill you and you won't get to drink any more free beer!"  As we made our way through the different parts of the brewery, we learned lots of stuff about making beer. And part way through, he announced, "Have we lost anybody yet? If you aren't here, speak up!" One joke right after another....

Sparky thought this guy was descending into a vat of beer or hops! NOT! He was just cleaning the vat. 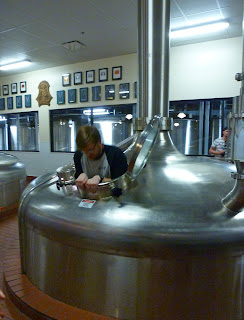 We learned that there are lots of different kinds of yeast to make beer. He explained the subtle differences between ales and yagers, temperature controls and what it does to the yeast, and gave us lots more facts.

Saint Arnold Brewing Company doesn't pasteurize their beer, allowing for more subtle refinements in how the beer tastes from one type to another....They store the beer cold, they ship the beer cold, and when you buy it, you buy it cold. They filter their beer less stringently than the big breweries, so that allows for more taste to come through.

Brock had lots of interesting things to say about his company's beers...

*They use 40 different types of malts, and lots of specialty yeast.
*They hope to process 50,000 barrels of beer this year. Big breweries do millions of barrels each year in comparison.
*The kegs weigh 165 pounds.
*You can make beer from Grape Nuts cereal! If you wanted to experiment at home, it can be done!
*Saint Arnold's also makes a root beer, but Spark didn't get to try it. It's got real cane sugar in it, so Brock said if you have diabetes, you might want to take an extra insulin shot before drinking it! 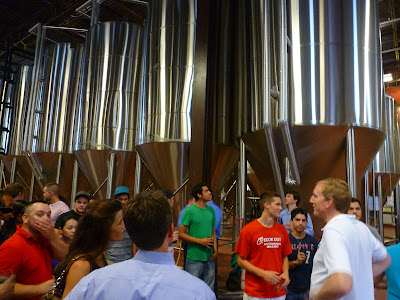 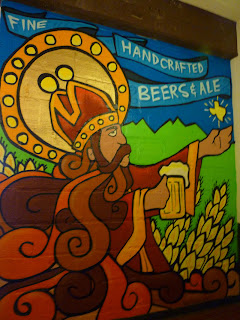 As Sparky knows nothing of all things beer, many things just sort of passed through one ear and out the other except for these little tidbits of information. There was a lot more information about the brewing process itself which would be very interesting to someone who wants to know more about beer and how it's made.

This company has won lots of craft beer awards, they were all over the wall where the vat storage room was. If you wanted to try Saint Arnold Brewery Company beer, it's only sold in Texas. You know how they say everything is big in Texas? Well, this company has a BIG heart. The company does LOTS of wonderful things for the community....fundraisers....assistance to military families--100% of their sales from Homefront IPA goes to their Operation Homefront assistance program to wounded vets and their families. Sparky loves a company with a heart.

The brewery also has a cozy, English pub atmosphere in their tasting room. After the tour, we sat down for a couple more beers and chatted with two really nice young women from Singapore who spoke perfect English, at our table. For a half hour, we exchanged information about traveling and our experiences from both sides of the world. It was fun! And it gave new meaning to the words that Brock Wagner, the owner expressed..."Drinking beer is all about community." There was definitely a communal imbibing spirit here today at the brewery. The wooden benches and tables setup encouraged you to talk to your neighbor and get to know them and that's what we did.
The tasting room was full of people, many of them there for the great beer prices. Anybody who comes to the brewery during the week between 3:00 and 4:15 when they have last call, pays 7.00, gets a free glass, 4 tokens for four beers. Needless to say, it's a beer drinker's Happy Hour. Eldy's favorite was.....

As we walked out of the brewery today, we saw the company car outside in the parking lot....What a great advertisement for a fun company with a great heart and love for its community! We highly recommend the Saint Arnold Brewing Company tour. It was a fun way to spend a rainy afternoon here in Houston, Texas. Tomorrow, Sparky is back on grandma duty for the afternoon, and she gets to play J.C. Penney Portrait studio with the baby! Yay! 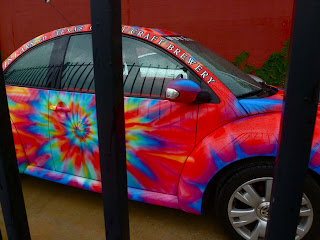