Our travel day didn't go quite as smoothly as it usually does. But first, we settled up on our electric bill, which was for 26 days. It was 144.87 (at about 14 cents + a kilowatt hour). We didn't think that was too bad for as hot as it's been, and the fact that the dual air conditioners were running almost non-stop night and day during the high 90's temperatures. Problems? We've got a rear jack that didn't come up all the way. It came up enough for the warning light to go off, so we managed to get going. It might just need some lubrication, or it might have something to do with the spring, we're not sure. It was very aggravating for Eldy, out in the heat, crawling under the rig, trying to fix it.

We're not going to miss the Houston traffic, that's for sure! Or the crazy drivers that zipped in and out front of us causing more than one instance of cardiac arrest! We consider ourselves lucky that we didn't get hit this month in Houston, with the number of times we slammed on the brakes as someone cut in front of us while we were traveling in the car back and forth on the frontage/"feeder" roads alongside I-45 or on the highways in and around Houston. Oh, well. Once you stay in the area for awhile, you start getting used to the traffic patterns and heaven forbid, even start driving like a local maniac!

We traveled on I-10 East today for much of our first day traveling towards Tennessee. Traffic was heavy with construction near Lake Charles, LA.

Eldy drove 220 miles, an easy drive for him mileage wise, but not so easy with the heavy truck traffic and city congestion we encountered. Glad he was driving! Every time a truck goes by us, I always think they are going to knock off one of our side mirrors, they are so close! And every once in awhile, Eldy says, "Boy, THAT was close!" It's nerve wracking to me, so I try not to watch the traffic, much to his consternation, because sometimes he needs my help reading signs. (Like today, when I missed my turn! fusses E.) Uh, er, I was indisposed at the moment, honey. 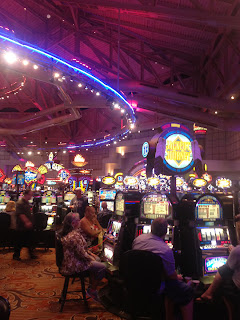 Our first stop was Kinder, LA. There is the Coushatta Casino and Red Shoes RV Park there. They are one and the same, just two different parts. We stayed there on the way to Texas, and really enjoyed it. Eighteen dollars a night for full hookups, fast free wi-fi, cable TV, spacious pull through sites, you can't beat that! Our site, 129, is a huge corner lot and has a little tree on it. If the weather was not so hot, Sparky would be sitting out under the shade of the little tree, pretending this is her backyard. :-) 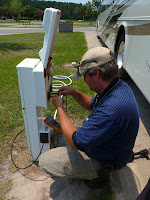 We went to plug in our Surge Guard protector and it kept shutting off. We called the casino RV park office and they had a guy out to look at the pedestal in less than 10 minutes.

He checked the wiring out, and everything seemed to be fine. We have no idea why the Surge Guard kept shutting off. After he checked it, we plugged our Guard back in, and everything worked just fine! Maybe the heat gremlins were at work today, causing havoc with our travel plans. At least, they were minor ones compared to the MAYHEM that could occur with high heat and driving! We don't have All State Insurance, but we do have good insurance, just in case. We were lucky it was all little stuff today..... 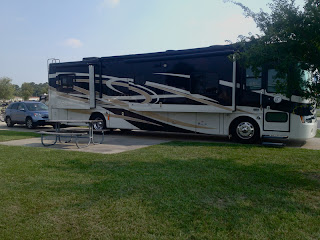 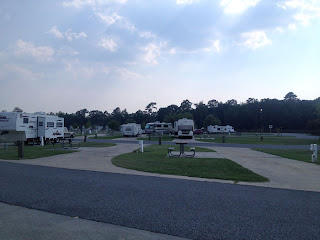 Red Shoes RV Park is a little off the beaten path, but that's ok. Exit 44 off I-10 E., then 19 miles north on highway 165 until you get to Kinder..No road or highway noise.  Nice pool, nice lodge for just the RVers in the park, we really like this place. To top it off, on Tuesdays, seniors can eat at the Seven Clans buffet for $5.50, all you can eat. So we did! Sparky wanted to play a couple of dollars in the penny slots, so she did! And she won a little bit, enough to pay for her buffet dinner with a little left over. Time to quit playing while she was ahead, so she did! (With a little encouragement from her better half, chides E.)

Time to kick back and relax and get out of the heat. The guy that drives the shuttle from the RV park to the casino said that it's 15-20 degrees hotter than normal for this area. There's no escaping it, and that's true for so many parts of the country, it's just going to be an oven just about anywhere you travel in the U.S. It's even 106 degrees today in Rapid City, South Dakota! Back to the rig we went......See you on the road tomorrow......
Posted by Jeannie and Eldy at 11:48 PM