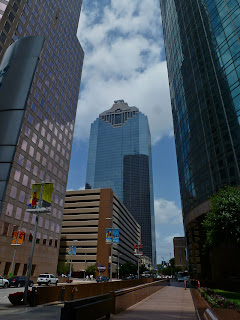 There's a "secret" underground culture in Houston, and many visitors never hear about it...But we found out about it and went to investigate today. Kerry gave us the day off, and after Gramma Jeannie, a.k.a. Grandma Sparky, took a bazillion photos this past week of the new baby,  Kerry said, "Grandma, the J.C. Penney Portrait Studio is CLOSED!" Take the day off, Mom!" OK....We did....But I'm having Baby Barron withdrawal already.

The first thing we did was research how to get downtown and where to park...Houston is a VERY walkable city, the blocks are short! But finding parking can be difficult or pricey or both, or none of the above if you do your homework. Sparky got online and printed out a list of all the parking garages in downtown Houston and how much they cost. (Looks like Eldo's researching skills are rubbing off on Sparky!)  Eldo and Sparky picked the Travis Place Garage as one of the more reasonable daily rates--10.50 for the daily rate and it was central to some of the things we wanted to see today. 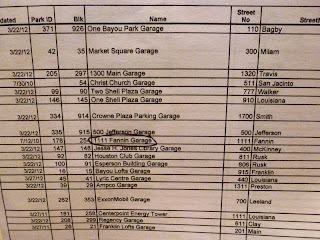 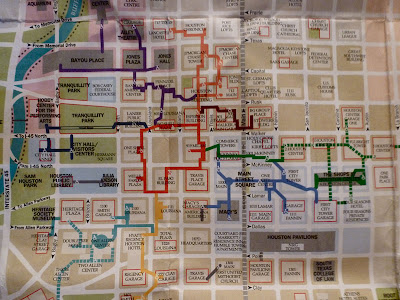 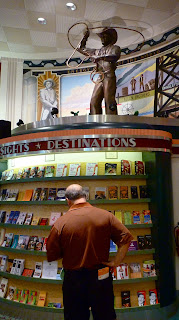 Next, Sparky printed out an Above Below Guide to Downtown Houston. A better version of this is available at the Houston Visitor Center located at City Hall, where we picked up more brochures upon our arrival. This is a terrific map. On one side it has all the attractions above ground classified into attractions and sites like-- eat and drink, institutions, sports, recreation, parks, music venues, shopping, theater and tours, and on the other side it has the buildings, streets and tunnels. All the different colored lines are the tunnels under the city. And that's what the underground culture is--the Houston Tunnel system! The locals best kept secret for getting around Houston in the hot summer months. No wonder you hardly see anybody walking around in the high temps downtown! The Houston Visitor Center was just beautiful!

After checking out the visitor's center, it was time to check out the tunnels. It's a whole other city underground! Well, sort of....What it is, is a seven mile system of pedestrian, climate controlled walkway tunnels that connect businesses underground. The tunnels link 95 city blocks. The tunnels connect to offices, banks, government offices, retail establishments, restaurants and parts of the theater district. There are gift shops, food courts, newstands, copy centers, flower shops and more. 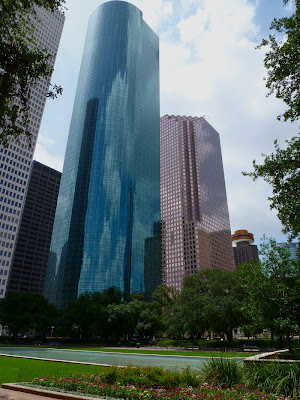 We went down into the tunnels for a short period of today to explore a little bit. We had to use our map a lot, even with Eldo as the official map guide reader. If you were an office worker, you would have no problem knowing which hallway to pursue, and there are signs occasionally, that direct you to different tunnels...But we sort of stumbled around today, getting a feel for what it was like to be down in the tunnels. It was not at all what we expected...We sort of expected a more "subway" experience, and that was not the case at all...It was VERY well lit, the number of restaurants were amazing, and there were many high quality, upscale restaurants located under the city. One of the negatives about the tunnels is they are not easily accessible to the handicapped, or anybody in a wheelchair. Too many stairs.....Eldo had to keep pulling Sparky along the walk in the tunnels today, she kept stopping to look at the restaurant menus, and kept asking,"Aren't you hungry yet?" Eldo wasn't and he didn't want to be caught in the noon day lunch crowd that soon descended into the tunnels...Time to leave and head for above ground! We loved walking around downtown Houston...It's clean....It's beautiful.....And, they just started a FREE bus line, the Greenlink. It's a 2.5 mile route that connects major office buildings along Smith and Louisiana streets to Metro Transit, the convention corridor area, shopping, restaurants, hotels, and the civic center. The buses run on compressed natural gas, and are air conditioned. We rode on it today, only its second day in service and were very impressed with the 7-10 minute intervals offered for pickup, and the friendly, helpful drivers. Once the office workers find out about the FREE bus service, we bet it will be hard to find a seat a few weeks from now!


We checked out the fountains near the Main Street Square Station along with these cute little guys and girls, waiting for the fountains to shoot as high as 40 feet in the air. They are on a timer, and weren't going off very high while we were there. The light rail trains run right through the fountain area, with the fountains shooting up on both sides of the trains as they come through. It's pretty cool, and even cooler at night. 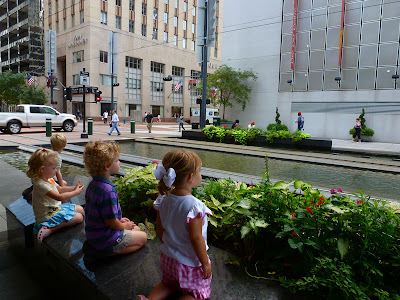 On the spur of the moment, we decided to ride the Greenlink down to the Minute Maid baseball stadium and check it out...more about that tomorrow!
Posted by Jeannie and Eldy at 11:09 PM