Sparky is not a shopper, but while passing the time waiting for her first grandbaby to arrive, she decided to go with Eldy to check out the exclusive Galleria Mall at the Westheimer exit off I-610 in Houston. It's too hot to sit outside the rig in the heat, so what better way to avoid it than go to a beautiful indoor mall. Sparky wanted to get a couple of questions answered at the Apple Store there, so she made an appointment with the "Genius" staff at the Apple Store. Anybody who understands computers and their technical workings is a genius! That excludes Sparky! But that's ok...it's fun to go into an Apple Store and have the techies fix things quickly and efficiently and they did. Another terrific Apple Store that we've been to...No wonder those geniuses are beating the competition handily.

We saw a Microsoft Store at the Galleria Mall, the first time we've seen one. They weren't anywhere near as busy as the Apple Store. Not even close....They've copied the Apple Store layout, and the way the Microsoft tech guys stand ready to assist and answer questions in their orange shirts reminded us exactly of the Apple Store geniuses in their blue shirts.

The Galleria Mall is an amazing place...lots of levels, part of the Simon Company empire of 337 retail/real estate properties in N. America and Asia, headquarters in Indianapolis, IN. Over 375 stores and restaurants to shop and eat from here at the Galleria, set beneath beautiful glass atriums.... 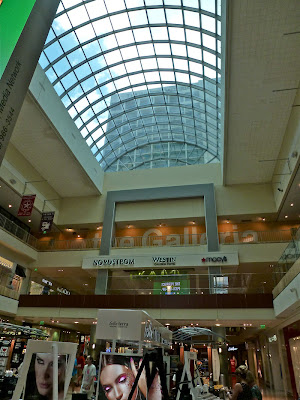 There is an impressive, really big ice skating rink on one of the levels. 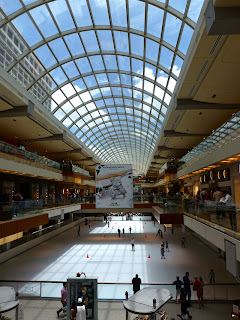 We watched lots of kid learn how to skate today, some hanging onto the wall for dear life and some appeared to be getting lessons with skills well under way. Posture, young lady, posture! Head up, straighten up that spine!
There's public skating sessions, beginner skating lessons and beginner hockey lessons offered at the Ice at Galleria. There's even circles stamped on the ice so a beginner can practice skating backwards! Sparky wishes she had had that when she was this little girl's age. Maybe she wouldn't have fallen on the ice rink at the local elementary school that fateful day in second grade, and lost BOTH her front secondary teeth! 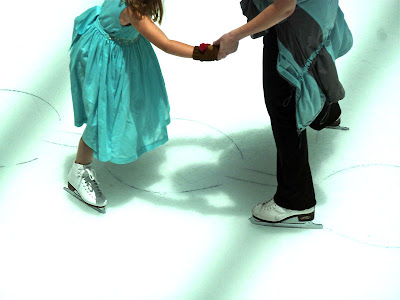 This is SOME MALL! It is the 4th largest mall in the nation and has nine types of stone, suspended glass balconies, three types of wood and plush leather seating. It also contains two hotels and three office towers. You could say this is a city within a city. It was a very busy, bustling place today. Apparently, it's the number one tourist and shopping attraction in Houston. We enjoyed our visit to the Galleria today, and we were good! We didn't buy one single item today! Just walked around and gawked at everything.....We'll see what tomorrow brings....maybe a baby??????