Do you speak French? I use to, studied it for four years in high school, then one in college. I had quite a command of the language at one time in my life, like about 45 years ago. I have forgotten most of it, so it was a little weird when we pulled into a Flying J today to get diesel fuel on our way to Cross Hill, SC, and I heard a string of fluent French coupled with one or two English words. I turned to see where it was coming from, and this lady and her husband in a Navion were pulled up to next to us in the RV lanes, and she looked VERY bewildered. She got out and was standing in front of the pump, waving her charge card to get my attention, trying very hard to ask me for help in broken English, but she wasn't able to give me a clue about what the problem was.

I LOVE a challenge, and I LOVE helping people, sometimes even when they may not want my help. (It's called being a busybody, explains E. WAIT a  minute, let me rephrase that. Sparky has no fear asking anybody anything, or venturing to see what is the problem. Maybe busybody is too strong a word, CURIOUS is more like it.) That's it, I am very curious! So I go over to the pump to see if I can explain how to use it, lacking most of my French to be able to communicate with her, and they, lacking any available tourist English, at least that which applies to running a multi- handled gas pump spewing out all kinds of requests and commands. Together, we figure it out.

I speak VERY slowly, like that's going to help! "Do you have a ZIP code?" I give a typical zip code, they look puzzled, I say the word, "mail" and hope they get it. They don't.  They think I mean numbers on the credit card. We try again..I figure out they are French Canadian, and don't have a zip code that will work? I come up with the French word for "mail"--"postale", they get it! He types in some kind of a number, (guess they DO have zip codes in Quebec!) and the pump says "start fueling"...HOORAY! They grin, I grin, and I throw out a little French I do know, "tres bien", very good. They smile, I smile, I go back to Eldy fueling our rig. I think of a little more French. I go back to the other side and say, with my thumb up, "Ca va?" (Sah, vah?) which loosely translates in this situation, "Everything ok? It worked out ok?" and she says, "Oui." YES!   That was fun! Sparky thinks maybe she'll brush up on her French for future French Canadian encounters, which have been quite a few so far since we've been traveling full time, as there are a LOT of French Canadians here in the south for the winter. They must have been heading home. 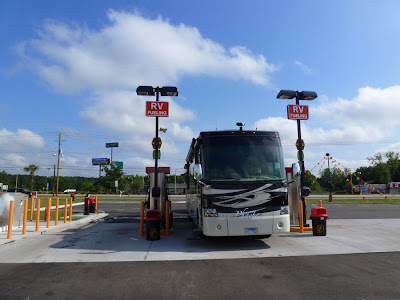 The Flying J, exit 77, off I-95 in South Carolina, was one of the nicest and newest Flying J's we've seen. PLENTY of room in the RV lanes, unlike some of the ones we have been in. It was great! Fueled up, headed back down the road....After awhile, decided to get something from the fridge, and something caught my eye on the bedroom floor....

SOMETHING WITH EYES......SOMETHING WITH LITTLE BEADY, BULGING EYES.....SOMETHING WET LOOKING AND SLIMY! I let out a big, "EWWWWWWW! WHAT IS THAT?"  The little critter freezes in place, obviously traumatized by my yell. I grab my camera, I am shaking because even though I am 40 times the size of this little thing... I'm shaking like a leaf, so the photo is blurry....And don't anybody say, "Aw-w-w, it's so cute!" IT'S NOT CUTE! Not to me, anyway....  :-) 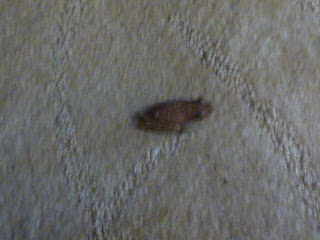 I DON'T LIKE ANYTHING SLIMY AND WITH BIG BULGING EYES!  First, I thought it was a gecko. This thing looked surprisingly like the Geico gecko on TV when I first laid eyes on him directly front on. We keep talking how surprising it is to have NOT found one lurking in the coach after spending the last five months in Florida watching them run around. I take the photo, I try to capture it by pouncing on it with a paper cup. Success! Now what?! I put my camera on the cup to keep the critter/gecko/toad in place so he doesn't jump out of the cup. I holler at Eldo. He is driving down the road yelling back, "WHAT'S GOING ON BACK THERE!" "WHAT???"  "I CAN'T HEAR YOU FOR THE FAN!"..."WHAT'S THE MATTER?"

I decide I need something bigger to place him in, something with a LID. I don't want to put my hand over the top of the paper cup, in case he jumps up with his slimy little body and touches my hand. .I never knew I was such a wuss!....So I get a margarine container out of the cupboard, and prepare to make the substitution from the paper cup to the margarine tub, which has a nice lid. I lift the cup just a little, and the critter JUMPS right at me. I  SHRIEK! He shrieks...He jumps again to the fridge and STICKS to the fridge with his webby little feet with sticky pads just long enough for me to clap the margarine tub over the little guy. EE-E-K! That's me...Another shriek, can't help myself!....AHA! GOTCHA, LITTLE TOAD/GECKO/REPTILE, whatever you are! I'm pretty sure by this time he's a toad or some kind of little tree toad or frog. He REALLY stuck to the fridge!  Kind of cool, actually! Eldy is freaking out, because I've shrieked at the top of my lungs at least twice....I yell, "IT'S A SLIMY TOAD OR FROG! BUT I'VE CAPTURED HIM!" And I bring him triumphantly to the front of the coach, in the margarine tub, with the lid on. Eldo is still driving...."Are you sure he's in there?" he asks. Well, of COURSE, I'm sure! "Did you shake the tub to see if he bumps around in it?" Well, just a tad, but it feels like nothing is in the tub. Oh, no! Maybe he jumped out when I did the slide the tub thing across the fridge and then clamped the lid over the opening as the tub came off the refrigerator edge.  "Eldy, we've gotta stop somewhere so I can make sure I really got him!"  So we did....We pulled off to the side of the road, I hopped out of the coach, took off the lid, and let the scared little guy go....

Geez, wonder what else has made its way into our rig? Other than the stink bugs that we had awhile back....no mice, thank goodness, at least none that we have noticed....Great! I'll probably have nightmares now about things hopping all over me or over my face, or crawling over my hands. We're battling gnats at the moment...Good grief!  What next?!

We're heading to the little town of Cross Hill, SC, where there's a very nice RV park called Lake Greenwood/Cane Creek. We got a FREE stay for six nights--  Whee-e-e-e-eeeeee!