Eldy did some research on approximately how far he wanted to drive today and we arrived at the conclusion that West Point Lake in Georgia would be a good stopping point for today's drive. We said goodbye to the Gaffney water tower, the "Peachoid", which looks like a giant butt cheek to Sparky! 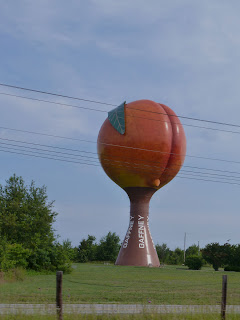 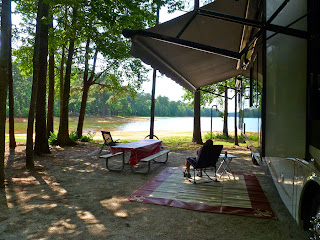 Using the recreation.gov site, he saw that there were several Corps of Engineer parks along the West Point Lake in Georgia, at least SIX. We arrived at West Point Lake, close to I-85 on the border of Georgia and Alabama early this afternoon and chose R. Shaefer Heard Campground. For 12.00 a night with Eldy's senior pass, we have 50 amp electric and a site on the WATER, although the water level on the lake is severely depleted due to long term drought. The sites are very shady...and in our section, very level. We had site number 6. We have plenty of room, and there's even a car pad site marked out for your car right next to the rig. When we came in, Sparky asked out of curiosity, "Do you have snakes here?" And the lady answered, "Oh, some people say they've seen some around, but ah never have seen any." Uh, OK...remember that for later..... 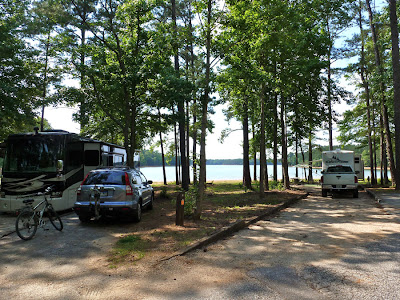 The Corps of Engineer parks along this lake are just fabulous...sites are VERY spacious, clean, some of the campgrounds even have laundry facilities! Great playgrounds for the kids..... 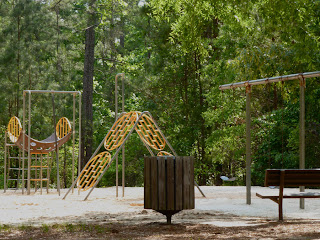 Plenty of nice roadways to ride a bike for miles...We LOVE Corps of Engineer parks, especially with the "Old Fart" pass...the senior pass that you can get when you turn 62, that gets you into government run parks like national parks, corps of engineer parks, etc. for half the normal rate. Ten bucks, one time only fee, good for your lifetime. Normal rate is 24.00, we are staying for 12.00 and you can stay for up to 14 days at a corps park.

Sparky went out for a bike ride today...and saw a SNAKE, a BIG snake slither across the road... 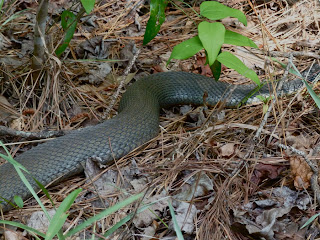 Naturally, she just HAD to get off her bike to get a photo, WITH THE ZOOM, of course! Have no idea what kind of snake this is, but someone please tell her...Sorry, you can't see the head. Sparky was told by the couple working the front gate that if it has a diamond shaped head, that's a poisonous snake. She can't see the head, it's to the right. It looks like it might have eaten, it's so fat! But it just stayed by the side of the road and didn't move once Sparky got off her bike. Sparky took a couple of photos, maintaining some distance and then hopped back on her bike. Biking around the corner after taking the photo, Sparky ran into three boys on their bikes.

"Hey, guys, wanna see a snake?" she asks...the ever present teachable moment in her mind wherever she goes...."Sure! Where is it?" the guys asked...ages about 7, 10, and 12 or so..."Right around the corner bend," she points. The boys asked what color was it and what did it look like? Sparky described it and the oldest boy says," Sounds like a water moccasin"...Uh, those are poisonous, right? He says,"Yes, ma'am, they are poisonous. We got LOTS of snakes around where we live. We got chicken snakes, we got rattlesnakes, we got....." and he named a bunch more snakes. Uh, thanks, fellas, see you around...And Sparky went on with her bike ride....Hm-m-m-m...this might not be the best place to stay and relax. Sparky will be hyper-vigilant from here on out, watching for more snakes. We are going to stay two nights for sure, but think we'll check out a couple more of the corps parks while we are here.

Verizon mi-fi is two bars if that...AT & T cell phone signal nothing at the campsite. With Sparky's first grandbaby coming soon, could be any day, she is not real happy about no cell phone service. So we might try another campground up the road....See you tomorrow!
Posted by Jeannie and Eldy at 11:49 PM