We Made it To Spring With BUGS on Board!

After a long, hard drive today from Kinder, LA, (about 205 miles) through much traffic congestion on I-10, bad roadway, construction zones and heavy traffic through Texas towns, we were pretty whupped. (Uh, Sparky wasn't whupped, just Eldo, clarifies Eldo.) Well, when Eldy gets stressed, Sparky absorbs SOME of that, too! So we're both tired.

We were so tired, that when a GIANT beetle/bug was seen crawling across the captain's chair up front, Sparky didn't have time to take a photo, she just swatted at it, stunning it and knocking it into the wastebasket which just happened to be conveniently underneath the bug. What a shot! She was  hollerin' the whole time, "WHAT THE HELL WAS THAT? WHAT KIND OF BUG IS THAT? It's HUGE!" She's shrieking practically at the top of her lungs for Eldy to take the bug outside which was now trapped inside TWO grocery bags with the wastebasket shrouded in a THIRD grocery bag on the outside.  "Eldy, GET THAT THING OUT OF HERE, it's not funny! TAKE THE TRASH OUT, PLEASE!" Since I said please, he did. That was the biggest beetle/ bug we have ever seen. Sparky didn't think anything more about the bug, once it was gone, UNTIL tonight.....

ANOTHER BUG, the same size and the same color came sauntering across the floor until Eldy calmly exclaimed in a rather loud voice, "THERE'S ANOTHER ONE JUST LIKE THE ONE FROM YESTERDAY!"  And then the bug/beetle/cockroached boogied across the floor, rapidly picking up his pace.  CRAP! Sparky grabbed the flyswatter, (actually, she grabbed the camera FIRST! Can you believe that? asks an incredulous E.) Well, yeah...I wanted to take a photo so I could identify it! She then grabs the flyswatter, SWAT!  Missed! Just as the cockroach scurried under the living room slide. GONE! for the moment. Hopefully, for a LOT of moments. Arrrrrgggghhhh! Great, now we have creepy crawlie thingies inside the house. How many? We don't know. But, these beetle/bugs are about TWO INCHES LONG! Sparky started investigating Mississippi beetles/bugs/cockroaches and found a photo that looks just like the ones we saw in the rig. To top it off, she remembered the conversation with the two fellows back in Mississippi at the casino, where they talked about the bugs, snakes and reptile problems home owners have been having since Hurricane Katrina wiped out a lot of the predators that eat these things. They actually asked, "Have you seen our cockroaches? They are HUGE!" Well, now we can say we actually HAVE SEEN THEM, and YES, they are HUGE! Two inches long, Sparky thinks three, actually! UGH! How to combat these, we don't know, and are open for suggestions. Naturally, having stayed in a bayou campground for several days, we're sure they hitchhiked along for our ride thru Louisiana and now here they are in Texas. Or maybe they are TEXAN cockroaches/beetles. We are not totally sure if they are cockroaches or not, but they sure look like the ones on the internet that identifies them as cockroaches. Everything is BIGGER in Texas, right?

Ok, back to the important stuff. There are two RV parks in Spring...Over the last week in our travels from South Carolina thru Alabama to Mississippi, we have met four sets of couples who have children in Spring, TX! Amazing to run across that many people in such a short period of time who all have adult children living in Spring.  Everybody says you can stay at Trinity Spring Oaks RV Park, or you can stay at Rayford Crossing. Of the two parks, Rayford Crossing is much nicer, but costs more. Here is the first park which we will be staying at for one week--Trinity Spring Oaks RV and Mobile Home Park off of Spring-Stuebner Road. That's the first clue that this is not going to be a "resort" type park, that it is a mobile home park and RV park. Which is fine...we just wish there were a few more amenities, that's the second clue this is a "no frills" park...There aren't any except for a small laundry. 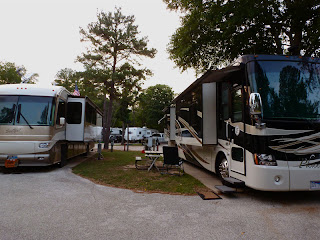 This is a small park....It starts out with 30 sites at the front of the park by the office...15 back in, and 15 pull thrus. The pull thrus are short, barely enough room for a 40 foot motor home and tow car. Some sites have odd placements of nightime security lights on posts, so it was a little tight pulling into our site. 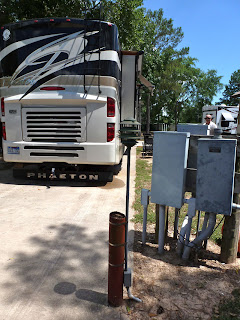 There are more RV sites located deeper into the park, we think there are about 70 total RV sites but we were not placed in the back of the park. Those RV sites must be for longer stays. When you come in, they assign you according to a site "suitable for your electric needs." Then they give you a written notice in big CAPITAL LETTERS that says, "WE ARE NOT RESPONSIBLE FOR POWER SURGES OR SHORT CIRCUITING OF THE ELECTRICAL SYSTEM. Please make sure you have surge protection and internal breakers in your RV." (Use 50 amp service only) Hmm-m-m-m-mm...What do you make of that? That electrical service has been problematic in the past? That people have fried their electrical systems in their rigs due to not using surge protection? Well, at least they've informed us of our rights. :-) They've got some other rules that don't apply to us, as we don't have pets, but here's what they say about THAT:
"No dogs or cats over 20 pounds, full grown weight...No labs, dobermans, chows, etc. "  (Wonder   what the etc. covers?) So if you have a furry kid over 20 pounds, this park is not for you....

This is a "no-frills" park...no pool, no clubhouse, no place to hang out other than the tight space between your rig and your neighbor's....That's the neighbor's satellite dish, he must have had a little bit of a problem getting a signal because of how far he had to come out of his site to get out of the trees. 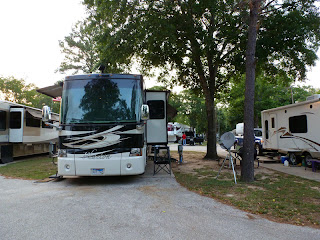 Some of the rigs are even closer, depending on what row you are in.... 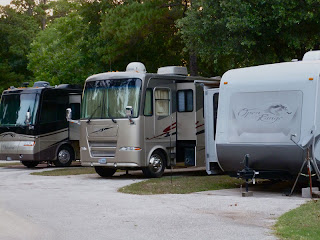 If you get lucky, and get a corner site, you have LOTS of room to spread out a bit and sit outside, although the sun is completely full blast all afternoon on the passenger side of the rig for most of the pull thru sites. This toy hauler has one of the nicer, more spacious sites of any of the RV sites in the front section of the park. 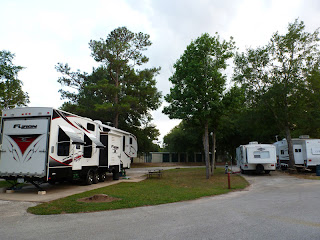 There is free wi-fi here, but it's sketchy...sometimes it works, sometimes it doesn't, it kicks you off at any moment, sometimes you can't get on after multiple tries, other times, no problem. It's kinda slow but we're grateful for the wi-fi to help us not zip through all of our allotted data for the month. (Too late--we're gonna be over...Eldo says as he heaves a big sigh.) Lots of bars for AtT & T and 4G on the cell, that's nice.

We are here for a week, waiting on the baby to come....Our weekly rate is 150.00, not too bad, but we've stayed in much nicer parks with a few more amenities for that price. But this is the big city and we're bracing for all the traffic, congestion and crazy drivers we're going to be encountering while we are here. We've already seen how Texans drive--CRAZY!

Did Sparky say it was HOT? And getting HOTTER, high of 93 today, it's hot all over the country, so there's no escaping the heat at the moment. And Sparky and Eldo are in a holding pattern, anyway, waiting for Sparky, JR., to have her baby. (Patience, Sparky, patience, soothes Eldo.) Patience is NOT one of my virtues. It's VERY difficult for Sparky to sit still, be calm, and wait....and read.....and knit....and not go anywhere and DO something! There's not a whole lot of nature around here to go off and hike, or kayak to pass the time, so it's QUIET time. Until Sparky sees another bug.....Bye for now.....