A Spammer Attack and Tiff Gets Dehydrated!

News Flash---A spammer (?) left an anonymous comment on our blog this afternoon late in the day. I hope just about nobody saw it because it was full of the F***** word, F-in this,  F-in truckers and then a bunch of gibberish. I pulled it as soon as I noticed it, but apologize if it stayed too long for someone's eyes to see. That worries me as I don't use the captcha comment feature, and why didn't Blogger see it as spam? We'll keep an eye on it, and I may have to resort to the "comment approval" thing if it starts happening more. Yuck!

We pull out of the KOA campground this morning, and decide to hook up in the dump lane as it was about the only level spot in the whole campground...well, ok, maybe there were a couple more spots. We hook up the car, Sparky does her procedure on the CR-V, then all of a sudden, Sparky hears the coach rev up to high speed. She looks over, and right next to the coach is the huge propane tank for park fill ups with warning signs all over the place. She gets nervous and just as she is about to tell Eldo to shut 'er down,  the engine on the rig shut down. Eldo comes running out of the coach and says, "We got a problem! The check engine light came on, it went from yellow to red in a heartbeat and now the engine has shut down." We couldn't move! From the time the light came on till the time the engine shut down was about 45 seconds. The only warning light we had was a yellow engine light which immediately starting blinking, then turned to red almost as quickly, then whammo--engine shutdown. No other warning lights came on, and we were dead in the water.

Here we are, blocking the dump lane and blocking the propane fuel tank fill. After class yesterday, and having the Freightliner help number drilled into our heads all day long, "call 800-385-4357", do you think we could remember the number or find it right away? NO-O-O-O! We panicked. Sparky is thumbing through oodles of manuals looking for the "HELP!" page full of numbers. Found it!

Sparky gets on the phone to the local Freightliner dealer in Gaffney, SC, just 10 minutes down the road, and Eldo gets on hold with the 800-385-4357 number.....Do you think we could remember how to toggle the dashboard to get the trouble codes for the engine as far as what caused the immediate shut down of the engine? NO-O-O-O! We were in panic mode. Eldy didn't even want to turn on the engine until he talked to somebody, which Sparky thought was very wise. Better call 800-385-4357, the Freightliner help center.

About twenty minutes later, Eldo got through to the service center at 800-385-4357.  Got the number memorized yet? :-) These guys have always been fantastic to us, we've called them several times in the past couple of years. They are always friendly, courteous, and a great help. We spoke to Gary, who used to work at the Gaffney service center and now is at the main center. He had Eldy turn on the engine, and THEN a low coolant light came on. Gary helped Eldo get through the toggling sequence on the dashboard to get to the engine diagnostics which showed zero engine error codes. He then theorized that because we had sat on a slope at our site, then moved to another slight slope in the hookup lane, and had very low coolant, ZERO coolant was registering on the sensor, so the engine diagnostics decided we didn't have enough coolant to run.

Gary told us to go ahead and turn on the engine, creep forward getting into a more level position and see if the check engine light went out after we went moved. It did! But the low coolant light came back on. Down the road we went to the Freightliner dealer in Gaffney, two exits down from the KOA campground. Once we got there, we purchased three jugs of coolant, and then, having started to calm down, we decided to stay at the Freightliner dealer, get 4 corner weighed (where you know how much weight is sitting on each set of tires) then get the radiator pressure tested, and what the heck! Let's just spend the night. They have electrical hookups here, just no sewer and water. This way we make sure we have no leaks before heading out on our major driving trip to Houston, TX (E. says and we can find out just how badly Sparky has overloaded the coach with craft supplies! ) Oh, dear...Sparky's worried...yarn doesn't weigh a lot, but jewelry supplies do, and all her craft books, and paper and magazines and......Bet we will be doing some BIG moving around of stuff after we find out our weights!

SO, IF YOU ARE NOT CHECKING YOUR FLUID LEVELS WHEN YOU CHECK YOUR TIRES, YOU NEED TO BE! 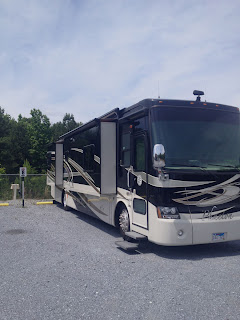 We sat for the afternoon in the Freightliner dealer and chatted with some of our classmates from yesterday. We compared notes, we shared notes about what we doing in for service...We worked on our travel plans for our next stop using a trial period on a new program called RV Trip Wizard. The verdict is still out on it. We saw it at the Tampa RV show and decided to try it. It's all web based and seems to have a lot of cool features on it. We'll test it out and get back to you on that.

We're in for the day and night here at Freightliner in Gaffney, SC. along with a WHOLE bunch of other coaches, 16 of them spending the night. Check one of the neighbors, bet he's every bit of 45 feet long. And then you add his tow... Yikes! 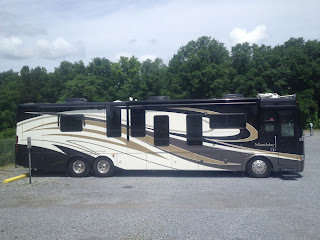 GOOD NEWS! Two hundred fifty-two dollars later, WE'RE CLEARED TO GO! NO coolant leak under pressure testing after two hours. (Cost--$90.00) Four corner weigh and set the tire pressures ($72.50) WE ARE NOT OVERWEIGHT! Well, the COACH is not overweight. We could stand to lose a few pounds, heheheh.

BUT---even better news! We don't have to move any craft supplies or get rid of any! WOO-HOO! YIPPEEE!. We got some replacement tire extensions for the rear wheels and they are installed correctly so Eldy can check the inside rear tires. (about 50.00 for parts alone)  By the way, if you are FMCA members, you save 15.00 an hour on labor charges and 5% discount on parts at any Freightliner dealer. Wouldn't you know, we belong to just about every camping membership, we just don't belong to that one! Haven't run across the camping membership discounts for FMCA in the places we stay.

We hope to set out in the morning for a Corps of Engineer park somewhere on the Carolina/Georgia border or maybe further west..Eldy went out to talk to the neighbors and talk about a small world! TWO other couples have adult children living in Spring, TX, where we are eventually headed for the month of June to see Sparky's daughter, Kerry. The world keeps shrinking!  ..See you later!
Posted by Jeannie and Eldy at 11:14 PM