What kind of booty, you ask? We're not talking human anatomy, here..... 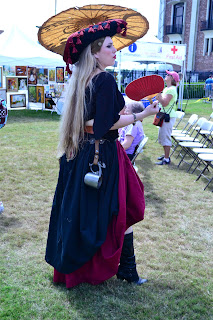 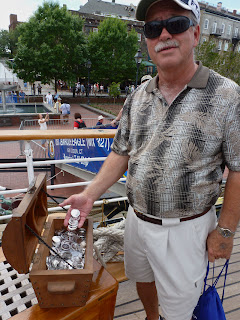 We're talkin' cannon fire salutes as the schooners salute each other coming into the harbor, like the salute give to the U.S.S. Barque Eagle, on its entrance to the harbor. Unfortunately, the sails are down, all of the tall ships came in Thursday before we got to go see them...The Coast Guard ship was HUGE! The main trunk is 147 feet high. It was a MAGNIFICENT ship! 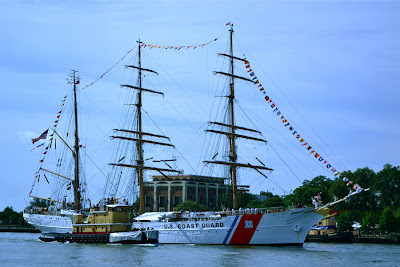 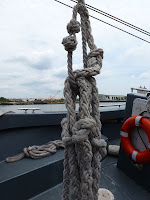 We're talkin' schooners, mizzen masts, rigging, knots, baggywrinkle and all kinds of stuff. Hunh? Baggywrinkle? What's that, you ask? It's the stuff that looks like Spanish moss hanging from the riggings of the schooners. It's not Spanish moss, it's not air plants, it's protective stuff made from worn out rope to prevent chafing of the steel rope cables against the sails so the cables don't wear holes in them. How about that!? The stuff you learn when you travel!

The schooners here were: The Alliance, The Appledore V, the movie ship, The Bounty, the Dewaruci, the Coast Guard Eagle, the French ships Etoile and La Belle Poule, the Lynx, the Peacemaker, the Picton Castle, the Pride of Baltimore II, the Roseway, Sir Martin II, and Theodore Too. 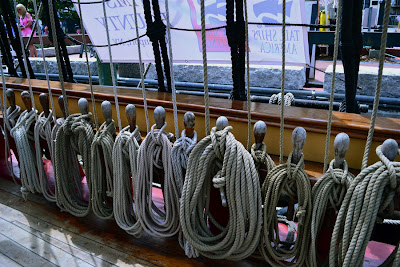 We're talkin' buccanneers and pirates! This guy was a dead ringer for Johnny Depp with his Jack Sparrow imitation (the Pirates of the Caribbean movies). He swaggered up to a lady in the ferry boat line, grabbed her and said, "You don't wanna be taking this boat, milady..it's gonna sink!" And we laughed... 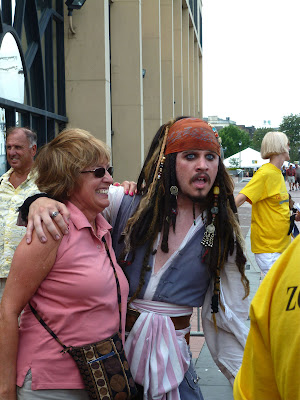 Everything you want to know about schooners was down at the Savannah Tall Ships Festival this weekend. We parked at the Savannah Trade and Convention Center for five dollars, avoiding lots of congestion and traffic on the OTHER side of the river. Tickets were twenty dollars a person, you could see five schooners on the trade convention center side, then take a free ferry ride to the other side of the river to see the rest of the nine schooners moored there--fourteen ships in all....If you wanted to go out on one for an hour and 15 minutes excursion, it was fifty dollars a person. We declined to do that..although it was a VERY hot day, right around 90 degrees. Some people were having trouble with the heat, and some were not.... 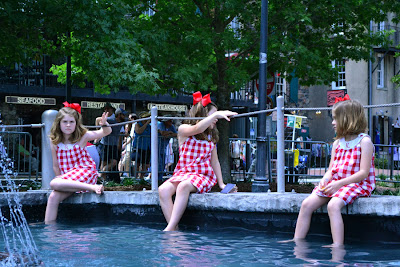 Where's Eldo? About to get on the Theodore Too, a large scale imitation tugboat based on the fictional tugboat from the TV show, Theodore Tugboat....Can you find him? 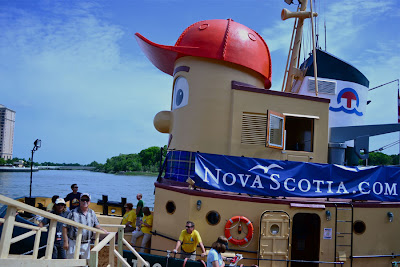 There wasn't much as a breeze on the Savannah River. But we still got to see some awesome ships with some sails up going out on the river.....The Roseway.... 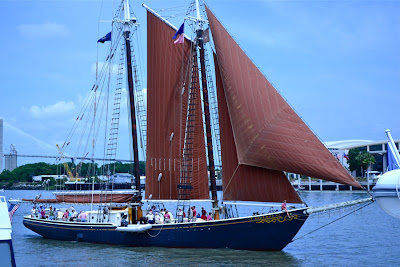 The Indonesian ship, the Dewaruci...It was a real beauty..... 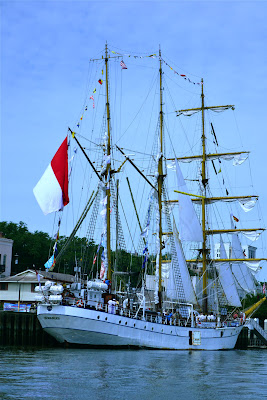 with a VERY slim and trim crew and captain. 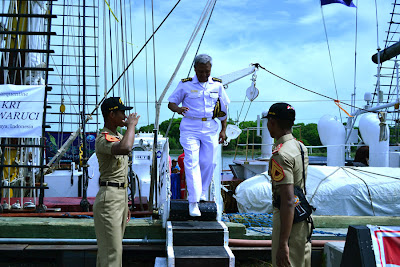 The Dewaruci had some of the most beautiful, ornate woodwork of any of the schooners.... 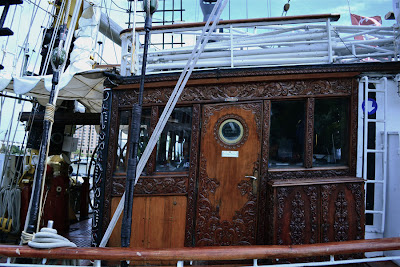 Your tour ticket got you on board all 14 schooners if you had the time and the patience and the walking legs in the heat. Ask any questions of the captains and the crew, check out all the details of the ships right down to the riggings and the sails... 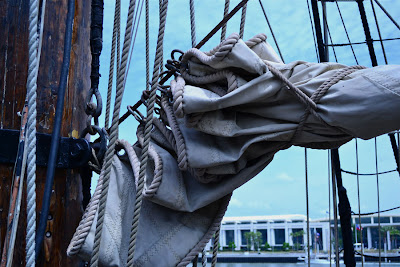 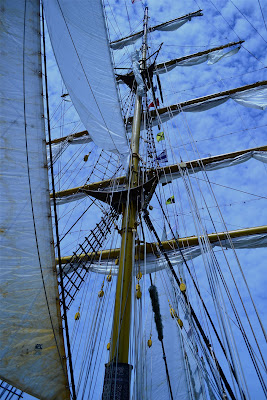 1. Sailors were the lowest of the low class, uneducated, and once a sailor, always a sailor. You were never going to rise above your lot in life if you were a sailor. Nobody wanted to look like a sailor!

2. Two thirds of the Royal Navy were made up of sailors who had been forced into service. When a ship was short of crew, the crew members roamed the dockide taverns looking for guys who specifically ate with their elbows on the table because they had obviously been to sea.  They would make better crew members than someone who had never been to sea. They didn't ask them if they wanted to sign up, they would beat them till they were unconscious, throw them into prison on the ship, and then let them out when they were too far from land for them to escape!

It was a fabulous festival and just an amazing thing to see, so many tall ships in the harbor...We were very fortunate to be here and to get to see them....We capped off our visit today with a trip to an old tavern on the wharf, called Kevin Barry's. It gets mixed reviews, but it's an Irish pub with live entertainment every evening. We had a late lunch there and it was very good on this occasion....rather dark inside, but an upstairs air conditioned porch which was welcome after many hours in the heat today....Eldy had a delicious corned beef sandwich with a cup of Irish stew, and Sparky had a club sandwich with the most delicious sweet potato fries....Time to go home and have a nap!