Troubles Getting Level at KOA Gaffney 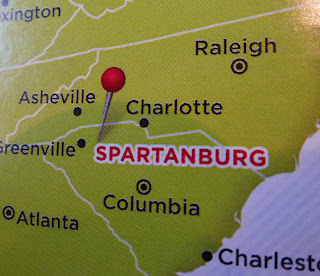 Off we went on a short drive to get from Cross Hill, SC to the KOA campground in Gaffney/Spartanburg. It was only a two hour drive if that, piece of cake. Now, getting level, THAT was another story.
Apparently, a lot of the sites at the Gaffney KOA are not very level, at least in the section that is around the 60's thru the 80's, in the pull thrus. No mention of that was made in any of the RVparkreviews website, which was surprising, but maybe they were not placed in the section where we are. As we looked at the sites coming in, it was very apparent from the rigs leaning one way or another, and various block setups, that leveling might be a problem.
Our site looked good, but after four tries of automatic leveling, and the system saying "EXCESSIVE SLOPE", one tire off the ground, then a different one on another try, or the front jacks excessively extended to where it looked scary and even then the level said "not level", we requested another site, the one next to us. It looked a little better. WRONG! The KOA guy came out to help us...brought us some blocks (we know, we need to be carrying some serious wood pieces for just such a situation, says E.) and then, because we were so far off the ground with our entry steps, brought us two concrete blocks so Sparky doesn't fall on her face coming out of the coach! What a nice man! We definitely have to come up with a better block system than some plastic yellow pads we bought at Camping World a long time ago which have been severely warped by jack pressure over the past year or two.
Sparky talked to two other couples and found out that anyone coming into this area for the sites numbered in the 60's has had a dickens of a time getting level. One guy blew out his leveling jacks line while trying to get level on his site in front of us. These are the pull thru sites, supposed to be the EASIEST to get into, but they sure aren't level. Even Freightliner has gotten involved as they come into the park to pick you up for class and they told the front office how units should be brought into this section and set up. Apparently, they have concerns for their chassis in this park! The park has spent a LOT of money trying to improve a LOT of things--the electric has been updated which is good. There were previous complaints about wildly varying power in the park awhile back. There are lots of new electric posts and wiring. That problem appears to have been fixed. They have brought in a ton of gravel and are trying to level out the sites, but they still have a long way to go. Some sites are still more dirt than gravel and with the rain we've been getting, it's extremely muddy around them. There is plenty of room between the sites, and shady spots are available.

Pool is small but nice...clean laundry and showers, very nice inside. There's a nice little campstore in the office welcome station. Nice pet playground for furry kids...Some sites have picnic tables, some do not. There are some sites with campfire grills and some without. 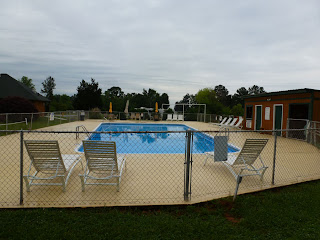 Park has free wi-fi but it's very slow, and if the provider thinks you are using too much bandwidth, they put bandwidth download limits on your wifi. We ran into this almost immediately, but all we were doing was the usual email and web surfing. Maybe a lot of people were already on the park's network, but it was very early in the morning. Our mi-fi works great, full bars. AT & T service, four bars and no problems dropping calls or reception on other end.

It's supposed to rain seriously for the next three days, which is good, because we will be in CLASS for TWO of those three days from 8:00 AM to 5:00 PM. That way, Sparky won't be tempted to play hooky, which she won't anyway, because she paid for her class. (That was the plan, to have some investment in it so she wouldn't beg out of going! explains E.) Smart man, he's right as usual! The Freightliner School is two exits down from the Spartanburg/Gaffney KOA and you get a 10% discount for staying here at the KOA if you are going to the classes. Cost for us around 37.00 a night plus a little change. Freightliner comes and picks you up each day and brings you back home. No ducking out of class for Sparky!

See you after classes......We'll see what Sparky learns about the chassis! And Eldo, too!
Posted by Jeannie and Eldy at 11:09 PM