As one of our exploratory trips around the Orlando area, we stopped to check out the Thousand Trails park there. Reviews can be found at rvparkreviews.com, but we'll just add our two cents worth. It's a great park....huge....Over 800 sites. We got a day pass and drove throughout the park. It was extremely brown and dried out. They are really needing some rain. There was a nice clubhouse, a campstore in the clubhouse, and an on site little restaurant.

We liked the layout of the park, there's some shade available, but not a lot. It looked clean and the sites looked reasonably spaced. There are two pools, one for the adults, one for the kiddies....The only bad thing about the pools is there is ZERO shade, no umbrellas, no protection from the sun. Sparky would not use the pool much because of that, but she DOES love the lakes and the boats. Heck, she could even put her kayak in and paddle around a bit. 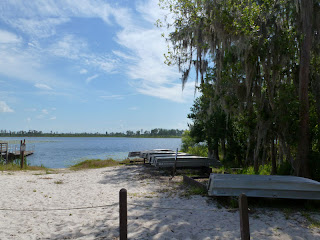 Many of the sites are 30 amp only, but there were plenty of 50 amp sites available as well...NO cable TV. There are two non-swimming lakes because of alligators. You can use one of the park's rowboats to go out and row around the lake if you want to. Sparky LOVES rowing a boat!

They have weekly travelogues at that park, and other activities as well...Some of our blogging friends have stayed there and really loved it. I hope they will report in and add some extra comments about this park. We did notice that the sites are somewhat typical for older Thousand Trails parks...uneven and not in very good shape. There is a newer section, section "I", but even those sites were not concrete, they were gravel and had significant sloping sides on many of them. 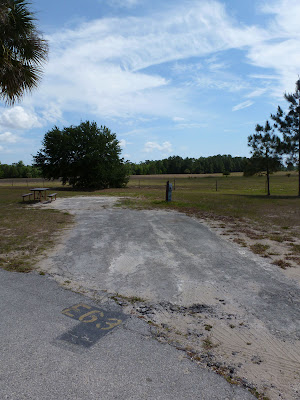 The coolest thing we saw today, was a pair of sandhill cranes with their "baby", who looks more like a teenager. 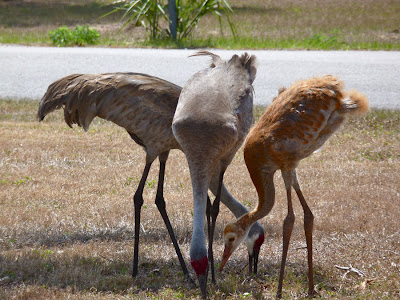 If you've been following our blog, you've seen the sandhill crane photos of tiny little babies with their parents, in our blog from just a few weeks ago. Here, you can see the babies as they have gotten a little older. 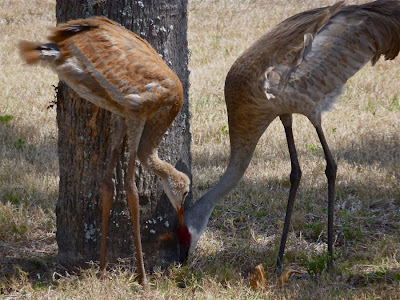 I have no idea how old this sandhill crane is with its parents, but it's getting closer to an adult age, with some more mature feathers coming in in the color range of the adult. 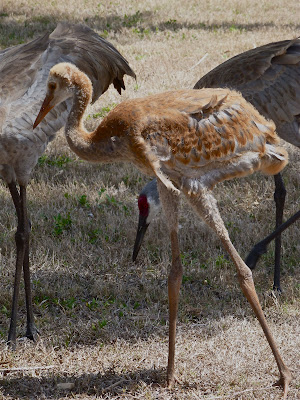 He or she, even ruffled the feathers as I got a little closer...The parents and the little one really were very comfortable and not threatened by my presence. I talked to them while I took my photos, and hopefully, I sounded non-threatening and soothing to them....It was a thrill for me to see this more mature baby sandhill crane, after seeing the really little ones back in Port St. Lucie a few weeks ago.....You can see the graying feathers coming in signifying more maturity in this young bird. I LOVE the cranes! I've yet to see the mating dance, but there's a blog coming up with a flamingo mating dance...Stay tuned for the Disney blog on Animal Kingdom! 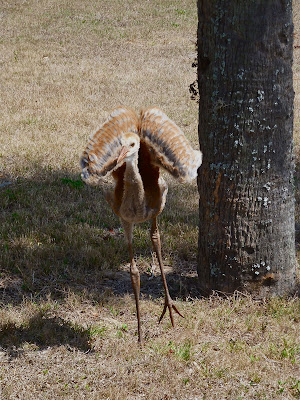 We would definitely stay at this Thousand Trails park in the future...See you later!