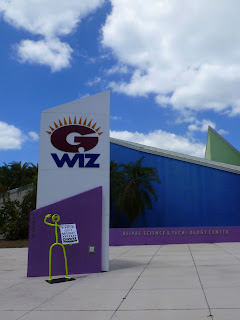 GWhiz--This is a great museum to take kids or grandkids. Eldo didn't want to go see it today, and can't say I didn't blame him, it's mostly for young children. Besides, it's 15.00 for a senior citizen to get in, but today, Sparky got in FREE! Some special garden show going on with discount admissions paid for by someone else, so that was a great deal!

This museum is mostly hands on stuff for kids...But you know, Sparky is a kid at heart, so she had a LOT of fun today! First on the exploration of the museum was the medical wing--here Sparky got to see a training mannequin that was made to resemble a breathing human, right down to the pulsing beat of the arteries that you could feel with your fingertips, to feeling of the exhalation of breath at the mouth.

Sparky got to practice chest compressions with the aide of a nurse/museum guide in the medical wing. The nurse guide told me that "Stan, the man" mannequin was about a two million dollar investment for medical colleges and EMT training academies and other such facilities. The mannequin can be programmed to have a cardiac arrest, a seizure, or have other health issues, enabling medical emergency training to be as realistic as possible before medics and doctors practice medicine on REAL people.  "Stan" even has openings for tracheotomy insertions, and tube insertions practice. He looked really real, with his chest moving up and down while he was "resting" on the table. Sparky learned some abbreviated C.P.R. moves today, like where to place the fingers so you don't break a rib, and how hard to press for compressions while watching the heart beat on the monitor. AND, to use the Beegees' song, "Staying Alive" to get the beat down for compressions. That's one of Sparky's favorite songs! Cool! 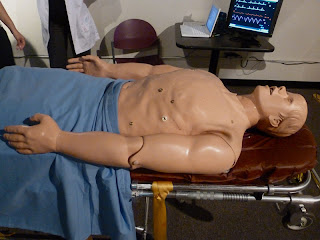 There were a lot of hands on exhibits in the medical wing, which was great. A great exhibit on cigarette smoking and all the nasty chemicals in a cigarette presented in a way that would make anybody think twice about what they were putting into their body, unless that person was already addicted to smoking. There were things to assemble like x-rays of the human body......then find the injuries in the x-rays.... 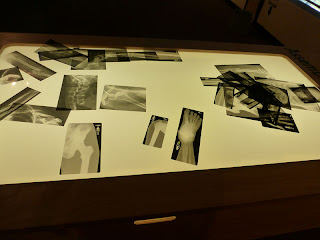 There was another exhibit for kids big and little, where you put on a headband, and with your brainwaves, no hands, make a little ball move away from you, a sort of biofeedback. I watched two kids do that, brother and sister concentrating like crazy. It was really neat! There were lots of other things to touch and move around for kids and grownups alike. 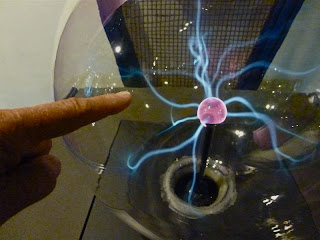 There was an interesting exhibit that Sparky wished Eldo had been with her. You sit with a partner, and you try to explain how to build a tangram puzzle but your partner can't see your blocks, there's a wall between you. It was an exercise in listening. (What did you say? Were you calling me? Were you talking to me? asks E.) Uh, no, dear, just thought this would have been an interesting exercise for us. 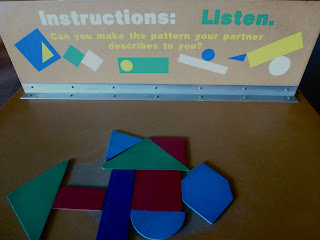 Then Sparky had fun with learning to program a robot....She was the only adult programming, the rest were kids with parents standing by, but that was great, because you KNOW how fast kids pick this stuff up! Sparky knew that if she ran into trouble, one of the kiddos would be glad to help. Sure enough, a little seven year old boy sitting in the seat right next to Sparky, had to get up, come over and show Sparky what to do a couple of times. Sparky was just a little slow to hear what the directions were and was a step or two behind. But she got it! Got that little robot to move right up to the red ball, stop, and swing with an arm to hit it! 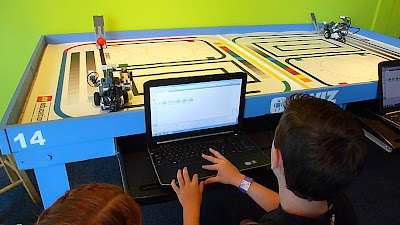 A fun stop at the museum today.....highly recommended for little kids and big kids, too.....Even if you do have to pay a bit to see it.
Posted by Jeannie and Eldy at 11:49 PM