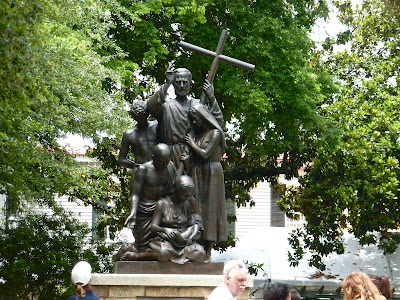 For our last day at Bulow (yay!) we took an afternoon drive to St. Augustine...about a 45 minute drive from Flagler Beach. St. Augustine is the OLDEST city in the United States, founded in abut 1565. Lots of history there...we just wanted to look around and see what there was to see for a couple of hours.

After visiting the beautiful visitor's center--don't miss it! It has a beautiful mosaic entrance, and a gorgeous spacious interior. 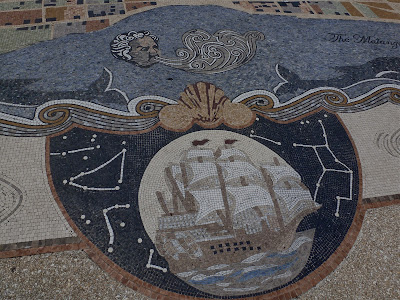 We decided to take the trolley tour, a quick way to see a city and learn something about it. For 23.00 a person (no discount rates), and about a 70 minute tour, we learned a few things about St. Augustine. Sparky forgot that on these bouncy trolley tours, it's just about impossible to take a decent photo, so not very many good photos today. What did we learn about St. Augustine?
It's got some BEAUTIFUL architecture...Flagler College is the top destination for tourists according to Trip Advisor. It is named after Henry Flagler, the railroad baron who originally was a Standard Oil man and it used to be known as the Ponce deLeon Hotel that Flagler built. The college is one of the finest examples of Spanish Renaissance/Revival architecture. You can take tours to see this beautiful National Historic Landmark, part of which would be worthwhile to see the dining hall where the students eat under numerous Tiffany stained glass windows. Flagler also had a memorial church built in memory of his only daughter, who died in childbirth.
There are beautiful churches and missions in St. Augustine...we saw some on the trolley tour..You can hop off and hop on at any time on the trolley, but when you hop off to see something, it costs extra to tour--like the "oldest house" in St. Augustine, or the college (7.00 admission for that) or the "old jail". We were pressed for time because of the lateness in the day and couldn't hop on, hop off, we had to stay on for the ride.

We learned that Ponce deLeon was a short guy--4 ft., 11 in. tall, and he always wore a plumed hat, the the feather standing straight up to make himself appear taller.

We learned that the Spanish moss is NOT Spanish, and it's not moss. It's a bromeliad, an air plant or epiphyte. It's a close relative to a plant called "beard lichen" but is really a member of the pineapple family. The "moss" used to be used to stuff mattresses in the 1800's. Florida used to have quite an industry in shipping "tree hair" over to England to be used for stuffing mattresses. The guide said you don't want to handle it, that it's a good way to get "chiggers" which are little bugs that make you itch for DAYS. GREAT! It's bad enough to worry about no-seeums, now there's chiggers! 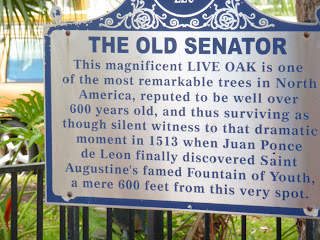 The "Fountain of Youth" is one of the trolley stops, but it was unclear where the fountain was, and it seemed very hokey the way the Fountain of Youth Architectural park was set up. Nearby was one of the oldest oaks in America, the "Old Senator", and it supposedly marks the spot a few feet away from Ponce deLeon's footsteps.... 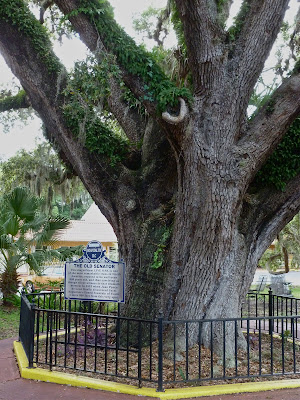 Oh...and the original, first Ripley's Believe-It-Or-Not museum is in St. Augustine, with a reproduction, full, life size statue of Michelangelo's "David"...in the full monty (the entire anatomically correct form), with a hedge row of bushes half way up the statue and half way around so you can't see his private parts from the street in case there are little children running around. Heck, all they have to do is run around the bushes, and VOILA! There he is! Mom and Dad will have some explaining to do, maybe, if they haven't been informing parents. 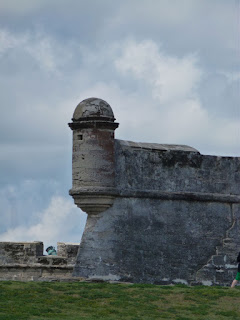 We were disappointed in the tour, it was not one of the better trolley tours which this company runs in major cities...can't quite put a finger on what was so disappointing..For one, it was too fast the way it was conducted, the trolley kept moving and there was seldom enough time to located what the guide was pointing out before you were past the point of interest. There was constant shifting back and forth between the left and right sides as to what you were to look at, and because we kept moving, you couldn't really see what you were looking at with the canopy on top of the trolley. The trolley would stop momentarily for people to get on and off, but never long enough to get out from under the canopy to take a photo. We would recommend a slower carriage ride tour instead, or heck, why not just walk around? There's a great fort across the street, and the churches and missions are very close to the center of town. There are also a TON of cute restaurants, bars, grills, and tourist trap shops all in the center of town.

Tomorrow, we say goodbye to Florida, we are heading for South Carolina and eventually, Freightliner School!
Posted by Jeannie and Eldy at 11:22 PM