After viewing the Asia section of Animal Kingdom, next we visited Africa....We took a safari tour, which is a really fun way to see the typical animals you would see at the zoo in a not-so-typical way...You board a "jeep" type vehicle like this..... 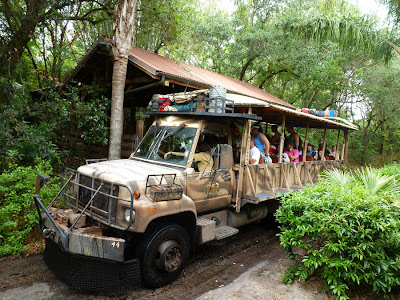 The driver carries on a pre-recorded "conversation" with a ranger who is "investigating poachers" on the African range. It's sort of like a pretend "Let's Catch the Poachers and Save the Animals" trip. Meanwhile, the driver provides little tidbits about the animals you see as you drive around the "savanna"....The animals can be very up close and personal, like right next to the vehicle! You could have stuck your foot out and touched this guy with it. 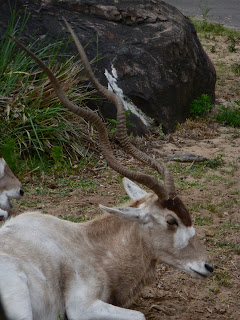 And of course, you see the usual giraffes, gazelles, and kudu that you would see at the zoo, but it's such a bigger, more beautiful environment for these animals, that it seems more natural and humane to see them in Disney's park than at a zoo in a confined area.....This ugly fella could have easily charged our vehicle, so the driver didn't hang around long for us to take a picture of him....He said that rhinos have poor eyesight and a bad temper. Sounds like my ex...haha..... We saw several groupings of ostrich eggs in different places as we made our way around on our jeep tour. Ever the skeptic, Sparky wondered if they were real eggs..They were according to the guide...Well, how come no bird was sitting on them? she wondered. She didn't get an answer to that....We had to move on.....We saw some more exotic animals that we hadn't seen in zoos...They were cool! 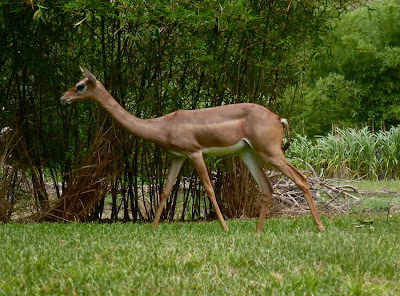 Then, we decided to go to Hollywood Studios for our next stop....We took a tour that was supposed to include special effects and how they do it in the movies...After watching an "actor" get a wave of water through a wall and window, a REAL torrential downpour took place and ended the special effects tour early. We sat outside under an umbrellaed bench and waited it out. On to a movie tour on a tram through movie history with animated "actors" and "actresses". The technology of the moving characters, their faces and mouths, seemed a little dated, even for Disney. There's a little live action with "Mugsy" and the guide on our tram, a fake shoot out, and lots of visual action and imagery to hold most people's attention, including Sparky's. That was one of our longer waits to get to see the tour, about 30 minute wait. Disney does a great job with keeping wait times down with their Fast Pass (?). You get your ticket ahead of time with a pre-stamped return time and come back to the ride later.

By this time we were getting hungry, so we headed to the Hollywood and Vine Restaurant for an all-you-can-eat buffet for 29.99. Yes, that was expensive, but it was the best buffet we had ever tasted. Chicken with Asiago cheese sauce, prime rib, pastrami rubbed pork loin with pickled apples, maple mustard glazed salmon, vegetable casseroles, tons of other choices and a terrific dessert center. The food was really very tasty, perfectly prepared, and not your typical buffet food. Well worth the money, in our humble opinion, so we pigged out!

It was getting to be early evening....our last stop of the day, Magic Kingdom. Eldo said that Sparky really needs to see the evening parade on Main Street down the street to the castle...We're going to save the magic for tomorrow's blog, there's so much to say and show.....See you at the castle!
Posted by Jeannie and Eldy at 11:49 PM