It was a slow day today....We caught up on laundry, rode our bikes...Eldo wore himself out on his bike ride today...Time for a nap! 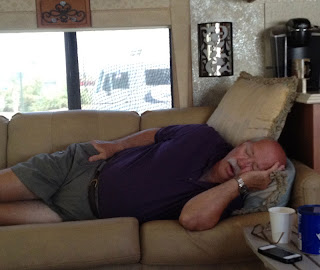 Not much going on EXCEPT at the pool. Sun 'n' Fun RV Resort has live entertainment almost every day, either in the afternoon heading towards the dinner hour, or from 7-10 PM at night. Tonight was Taylor Taylor...a gal pal duo with dynamite pipes and awesome arrangements of cover songs, originals, and WOW! Fiddling skills like you wouldn't believe! Glenda Taylor plays lead guitar and burns up the fiddle, Dee Wilson plays bass and backs up with awesome vocals, harmony and vocal skills of her own. Glenda was working the fiddle amongst the crowd and while she moved around tables, people stuffed bills in her earrings, in her guitar straps, in her booty pockets, everywhere but the usual places you'd expect! (You mean, down her front? asks E.) Yep, every place BUT there! She was wearing a LOT of moolah by the time she got done playing!

They played everything from top forties, rock and roll, original stuff, some country, Irish and Cajun all thrown in together....and both gals have terrific voices! We really enjoyed the band tonight, we hope we will see them again somewhere in the area. They were AWESOME! We are amazed at the quality of entertainment that Sun 'n' Fun brings to the park. These groups are not the usual old timers, stuck in the '50's music that you hear so often in retirement parks and over 55 communities. (Careful, Sparky, there are a LOT of retirees that LOVE the fifties, like ME! says E.) Yep, but Sparky likes funky, eclectic music that covers a LOT of ground all over the place....rock, seventies, eighties, funk, soul, R & B, and the groups and individuals that are coming to the resort are covering just about all of it. Time to DANCE, Eldo! And we did........See you later! 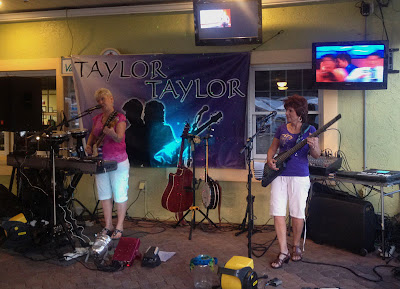