Darn blogger! Somehow, two posts got published in one day...Sparky is confused on how that happened! Can't always see the dates at certain points in editing, so oops!

The yard sale wasn't much...it wasn't publicized other than a tiny line in the calendar for the month. Sparky suggested that the office put up a sign at the check in gate for all people entering the park as a reminder that the yard sale was this morning. They said, "That's a great idea! We'll do that." They didn't.

We were trying to sell our RV ladder that we thought would be the ONLY ladder we would need...right height for the old coach, wrong height for the Tiffin. This thing collapses into a very tight structure for storing in the RV. It's been a good ladder for us, but it's not tall enough. We got it at Camping World. Now Eldo wishes he had a ladder like the Little Giant. 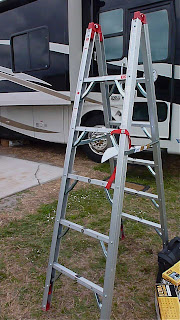 Here's what it looks like when it's totally collapsed and shut down...It's really compact. 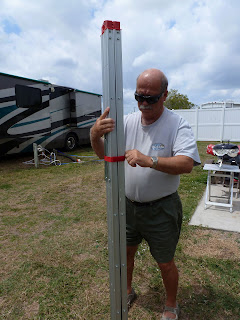 The sale was from 9-12:00. After awhile, Sparky left Eldo in charge of sales and off she went to a nice neighborhood garage sale just down the street. She found some great brand name boy baby clothes for the expected grandbaby coming in June....She REALLY enjoys garage sales and used to sell on Ebay. Maybe she'll get back into that more and try to make a little money on the side....(Uh-boy....and WHERE are we going to put this stuff, woman?! The bays are FULL! fusses Eldo.) Maybe I'll sell some yarn, heh-heh.....or NOT!  These three girls in sunglasses on the left in front of their parents' house were doing their best to sell lemonade as a sideline. They were cheering their hearts out chanting and yelling, "BUY SOME LEMONADE! BUY SOME LEMONADE!" and doing several cheer routines. It was tempting to get some, but Sparky was on a mission for baby boy clothes! 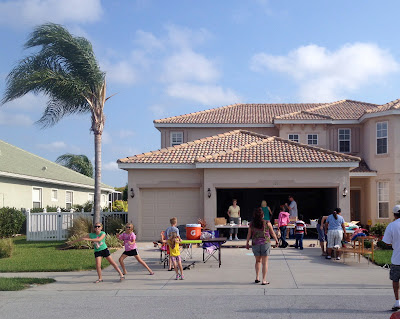 When Sparky got back to the site, the ladder was still there, but we sold some tire covers from our old rig. Yay! (Too bad Sparky didn't put out yarn for sale, we could really use some freed up storage space, grumbles E.) He's not really grumbling, he's just teasing...uh, right, hon?

Today is Eldy's birthday, so this evening, we are going OUT...to dinner. It's yet to be decided where we'll go, but we're looking forward to it. Happy Birthday to the sweetest, most understanding, flexible traveling partner and love of my life, Eldy......
Posted by Jeannie and Eldy at 11:31 PM