Eldy checked our tires this morning as we were preparing to head out on the road again after six weeks of sitting at Florida Grande in Webster, FL. The inside dual rear tire on the driver side was 12 pounds low. Not good....All the rest of the tires were fine. We decided to stop at a Shell/K truck stop to get fuel and air up the tire. They didn't have air! What kind of a truck stop even if it is a little one, doesn't have air!?? 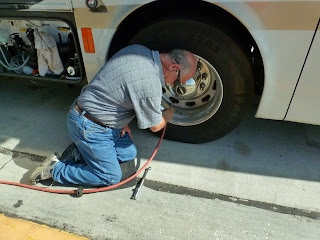 Next stop....the Flying J truck stop at exit 285 off I-75. We pull into the RV lane to get air as there was free air supplied at the RV lanes. That was one of the narrowest sets of RV lanes at a Flying J we have ever encountered! We do NOT recommend using the RV lanes at that truck stop! After having zero success filling the tire from a balky air pressure system hose, Eldy pulled out of the RV lane, around the back and over to the truck lanes to get air. Once again, we could not get air into the tire. We were thinking that the valve stem was bad. We debated calling Coachnet, or stopping by a tire place that was on the small side down the road. We didn't know if we could fit into the tire center, with our car in tow. So we decided to call Coachnet, our roadside service, who has been a really great asset to our traveling as we have used it several times since we've been full timing. 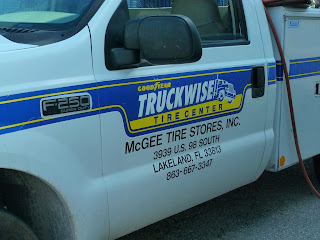 An hour later, a McGee Tire Service truck pulled up, and the capable technician checked the low tire. We had a broken valve extension, it was missing a rubber piece of some sort inside the stem. That was probably causing a slow leak. He took the valve extension off as the valve stem was unprotected and bouncing all over inside the tire extension.....He suggested we not use the valve extensions at all, and replace them with what he called "Gator Caps." We asked him if he could check the other tires and our other tire pressures were off a few pounds. Our tire gauge was not reading and calibrating tire pressure as well as it should. The fellow did a great job and we were VERY satisfied with the service today. 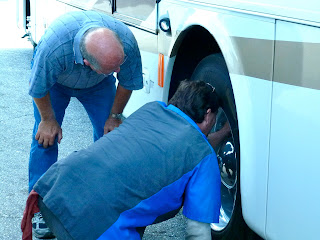 A new tire gauge was purchased, then we discovered that particular Flying J didn't carry the Gator Caps, so we replaced everything the way it was, minus the one extension, and I went to check the Honda CR-V to redo the towing procedure. DOA, dead on arrival again. This time the battery didn't even last an hour in towing before dying. It's been dying sooner and sooner each time we tow. We know we need to replace the car battery, and soon! We haven't had any trouble with it in ordinary driving conditions, so we're just trying to get the max out of it before replacing it. Needless to say, we don't go anywhere in the car without our handy dandy little red charger.....

As we were driving down the road, Eldy kept checking his fuel economy, or lack of, we should say. Normally, we get about 9 miles to the gallon or better in flat highway driving, but the m.p.g. today were hovering right around 7-8 m.p.g.  When you sit for a long time, algae possibly growing in the fuel tank is a concern. Algae starts to grow if conditions are right and there is moisture in the tank, around 28 days. We've been sitting for six weeks. It depends on a lot of conditions whether algae growth is going to happen or not. Quality and turnover of fuel in gas stations and truck stops affects that. We always try to fuel at high volume truck stops when we can. After a few more miles down the road, we decided that the engine is not running "rough", it's not  acting "balky" and we think a variety of road conditions plus some wind has affected our fuel economy today....But you can't help worrying about these things when the "norm" is different. We plan on using a fuel cleaner recommended by Cummins Diesel called Biomedic, a Lucas product, but we haven't been able to find it......Eldy was trying to make up for some lost time spent at the truck stop waiting for the tire repair by driving at 60 mph, so that was a factor as well....We get our best gas mileage by driving 55 m.p.h.. Price of diesel today was 3.96 a gallon. It's gonna keep climbing, but that's not going to stop us from enjoying our full timing lifestyle. We'll spend less on campgrounds, stay in one spot more, and be very careful planning our mileage and our trips. It's still a very doable lifestyle!

We plan to stop halfway to the Keys today..somewhere near the Everglades, about a 200 mile drive from Webster...But we won't have time to "gator gawk" at Shark Valley, where the babies have been hatching lately. Darn! By tomorrow afternoon, we'll be at Sunshine Key, a Thousand Trails park in the Big Pine Key. As it turned out, all the waiting around for the tire situation to be resolved caused us to pull into the Midway Campground in the Everglades too late to get a spot. They had filled one hour before we got there. (No reservations, just show up and pray there's a spot. There wasn't.) RATS!  Our choices were to 1) backtrack 8 miles or 2) continue on 40 miles east to the Miccosukee Resort and Gaming Casino near Miami.  We soldiered on.....and at 6:00 PM arrived at the casino. It's FREE boondocking for the night. You just need to check into the casino desk and get an overnight pass to place on your windshield. 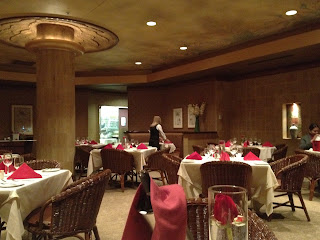 Sparky decided to splurge and treat Eldy to a special Valentine's Day dinner at the casino restaurant, Empeek-Cheke....Eldy had treated Sparky the night before to a pre-Valentine's Day dinner, thinking we'd be parked in the middle of the Everglades Valentine's Day night. But we were staying at the casino instead. For 14.95 a person, we got a New York strip steak dinner with three jumbo shrimp, baked potato and a wonderful salad. It was a terrific dinner for the price! We were waited on by a VERY debonair, charming waiter named Gustavo. At least, I think that's what his name was. Eldy said he had the manners and the waiter qualifications of the waiters that he was accustomed to on cruise ships when he was a cruise agent. He made sure our wine glasses were always filled and everything was JUST SO on the table. Very fine dining....woo-eee! A nice way to spend Valentine's Day together.....Except for the next morning, when I discovered the casino had tacked on an extra 15.00 surcharge in case the credit card didn't cover the food bill! I complained to the management, and they said in a couple of days, the 15.00 would go back on my card. I HATE it when they do that! No mention of that anywhere in the restaurant or casino info..... 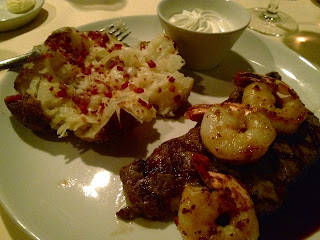 One nice thing...each lady got a rose....of course! I took mine home and put it on our dining table. Sweet! 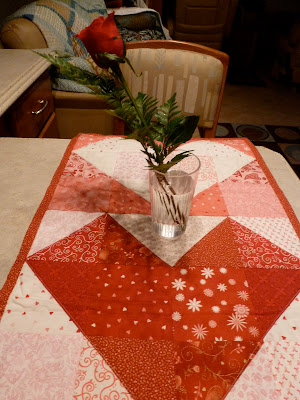 And how was it spending the night in the casino parking lot? Like spending the night in a busy hotel with lots of celebrators! People rolled into the parking lot by the dozens, ready to celebrate Valentine's Day and play the slots. There was no separate lot for RVs, although we were directed to "RV parking", but cars piled in there just as much. Apparently, the parking lots for cars towards the front of the casino filled up fast so they joined us in the parking lot.  It was very noisy till about midnight, then things quieted down. Tomorrow, we hit the road again...only 120 miles left to go to the keys. We are taking highway 41 east, then highway 997 south, then hook up to highway 1...see you there!
Posted by Jeannie and Eldy at 11:45 PM

Email ThisBlogThis!Share to TwitterShare to FacebookShare to Pinterest
Labels: problems on Valentine's Day