It's a winner all the way around! Whether you like to watch the Super Bowl or not, Sunday is a great day to just take it extra easy...We did.

I grocery shopped, Eldy visited with Nick, our neighbor....They were busy being "techy geeks" on their phones. Eldy was showing Nick how to use "Siri" on his iphone 4S. Nick was showing Eldy his windshield wiper video he made to figure out how to fix his wipers on his coach. True two techy old farts, if you ask me! Before anybody gets upset at being called an old fart, I'm one, too! Gee, I wonder what age qualifies you to be an Old Fart? Part of it is your outlook on life, I'm sure....In this neighborhood, nobody is an old fart! We're bikin', we're hikin', we're swimmin', we're kayakin'! A lot of us are, anyway! :-) 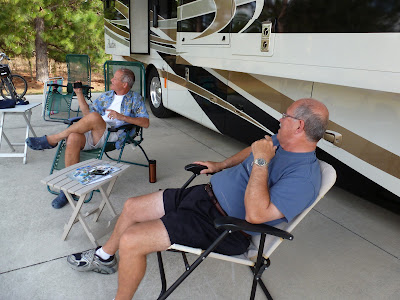 Made deviled eggs for tonight's Super Bowl pot luck...we're supposed to bring "heavy" appetizers and/or hors d'ouevres. I took that to mean for us, bring lots of stuff. We don't have big casserole dishes or storage containers, being that our convection oven is so small, so we either double up on the recipe, cooking two batches, or we borrow the neighbor's convection oven! Look at this spread (shown below) that the residents came up with! It spanned one whole side of the clubhouse room! And this was on top of the chili cook-off with 6 contestants. 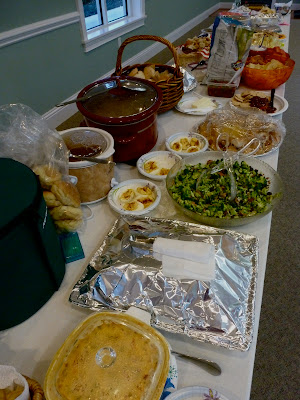 Lots of good chili, it was hard to pick a winner! Personally, I voted for the chicken chili, it was delicious! But everybody has a favorite way they like their chili, there was something there for everyone, and it was ALL good! A cash prize was awarded with a chili necklace....But I'm ready for the game to start! 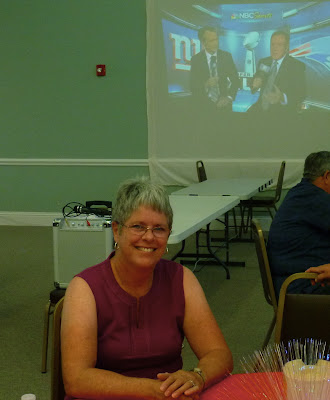 Florida Grande rented an LCD projector for this evening....Nick and Eldy put their heads together to research a great internet deal. An awesome projector and sound system for just a little over 100.00 that came out of California and that INCLUDED shipping! The system came with a few days allowed in the rental agreement, so the park had time to check it out and set it up. Good job, guys!

It was a great evening spent with good friends, great food, and a super duper football game.....Life doesn't get much better than that!
Posted by Jeannie and Eldy at 11:45 PM